The militant who was involved in the killing of SI Farooq Ahmad has been eliminated two days back during an encounter in South Kashmir’s Pulwama District. 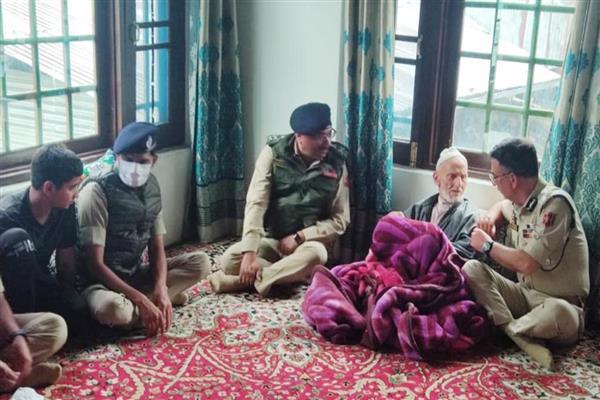 The Director General of Police, J&K, Shri Dilbag Singh on Wednesday visited the home of martyr Sub Inspector Farooq Ahmad at Samboora Pampore to express his condolence and sympathies with the family of the martyr.

Speaking to the family members, the DGP praised the services of the officer in J&K Police Department.The DGP J&K said that the officer was dedicated and committed to his role in the department and added that because of his hard work towards the assigned positions he earned his promotions from time to time. The DGP assured that whole police Pariwar is with the martyr’s family and assured them all possible support.

Shri Farooq Ahmad Mir was appointed in Jammu and Kashmir Police in the year 1998 as constable and in 2008 he after qualifying the departmental examination was converted as Sgct (M). In December last year the officer was promoted as SI (M) and was posted as OSI in IRP 23rd Bn. On 17th of this month, he was martyred by terrorists. He is survived by his wife, aged father, two daughters and a son.

Pertinent to mention here, The militant who was involved in the killing of SI Farooq Ahmad has been eliminated two days back during an encounter in South Kashmir’s Pulwama District.