‘A writer only begins a book, a reader finishes it’------Samuel Johnson 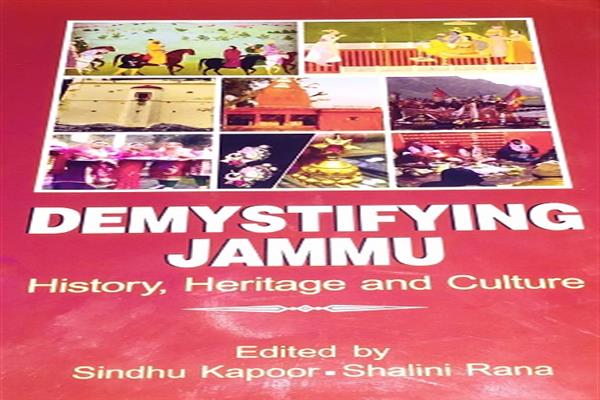 The northern frontier and erstwhile state of Jammu and Kashmir has always retained its numero-uno position in this sub-continent of ours in becoming a decider of events which has had the potential of shaping future course of events in India affecting the lives of millions in turn. Though much has been written, heard and seen in the past as also in the present times of Kashmir being the cynosure of all eyes, conversely Jammu has always remained in the shadows despite possessing everything in its being to strike out independently in the realm of eminence.  Consequently most of Indians view Jammu as an adjunct of Kashmir which is no fault of theirs. Nothing can be farther from the truth and preposterous if we try clubbing Jammu and its very existence with that of Kashmir.

‘Demystifying Jammu ---History, Heritage and Culture’ is a wonderful treatise towards delineating Jammu’s separate identity, and eminence in the comity of states of India. Since not many books have been solely dedicated to Jammu’s cause, hence a conglomeration of 24 eminent writers from Jammu region each one adept in his/her field of specialization to include history, heritage, culture and military tradition took upon themselves to come together to focus on this neglected Jammu region. The book is very aesthetically designed, rich in gloss with an equally eye catching red coloured hard cover back. The main heading in white colour and sub-heading in bright yellow colour along with the editing team at the bottom of the front cover of the book adds an entirely new hue to this masterpiece of scholarly work. The collage of photographs forming part of the main frame of the front cover of the book includes that of Raja Mukund Devsingh of Jasrota going for a leisurely walk, poet Bihari offering his prayers to Radha and Krishna, Various Dogri ornaments in all their finery, last but not the least the women of Bhaderwah performing the ceremony of ‘kanchouth’.

All of 385 pages having a glossy finish, the book has been very aptly ‘ front messaged’ by none other than Dr. Vinay Sahastr buddhe, Member parliament Rajyasabha, and president ICCR, Indian council of cultural relations, GOI as well as by Dr Nirmal singh former Dy CM and  speaker J&K legislative assembly. This master piece of book  unraveling all its hidden assets contributed by eminent scholars from Jammu and elsewhere too is a compilation of research works that invariably concentrate on the region’s heritage, history, art, living style, and  socio economic set ups as found obtaining from the times of yore till date. Neatly prefaced by academicians of repute i.e.  ‘Sindhu kapoor’ and Prof ‘ Shalini Rana’ who both are at present in the teaching faculty of top  educational institutes of Jammu and Kashmir  ,the duo have very succinctly laid bare the humongous efforts of all the 24 eminent writers in making the book that it is today. The contents page of the book contains   the acknowledgement page by the editors  of this book  followed  by  the preface part and finally an indexed portion of all the famous research papers by the 24 writers as stated above. It also has all the names of the writer-cum-contributors with their designations in the ‘List of contributors’ finally ending with the index part of the book with a detailed enumeration of people, places, and sundry other nomenclatures with annotation of page numbers.

The book very aptly starts with an overview of Jammu city given by Dr.Poonam Choudhry, director, center for studies in museology university of Jammu. It gives us a detailed account of all the stages of development of Jammu city right from 1370 AD under the reign of Raja Mal Devtill the latest smart city plan of 2020. One study of this chapter and a discerning reader is transported into the interiors of Jammu city with names like ‘Pacci Dhakki, Sarajen di Dhakki, Jhula ka mohalla, Kanak mandi etc. In the similar vein Dr.Rajeshwar singh Jasrotia (IFS) takes us into the awesome world of Dogra painters via his research paper ‘Nainsukh-The   Painter of  Jasrota kingdom’ who had their reach spread far and wide as London and Europe as a whole. DrJasrotia himself from the same clan has focused in particular on the famous Dogra painter Nainsukh (1710-1778) one of the finest during his times. He was responsible for introducing elements of the Mughal style of paintings in his works. His work of Raja Balwantsingh is most celebrated during that time period. If one looks through the prism of time and place then ‘Nainsukh’ seems to have shattered the proverbial glass ceilings of Mughal impressions to boldly strike out on his own into the realms of naturalism.

As per Dr. Jasrotia the book titled –Incarnations—A history of india in 50 lives’ has Nainsukh’sname along with famous personalities like Mahatma Gandhi, Lord Buddha, Mahaveer , Aryabhattaetcwho changed the course of destiny of this sub-continent. But for all his lofty paintings no doubt, Nainsukh and his splendid works don’t find mention in the modern world of art. It would have been in the fitness of things if Dr. Jasrotia could underscore the importance of doing a GI TAG (Geographical indicator tag) for the paintings of this esteemed painter of Dogra land. This sadly has not been pointed in the research paper of Dr. Jasrotia .The chapter dedicated to ‘Heritage through Jewelry’ by ‘Nidhi Verma’, a PHD research scholar makes us realise the rich and opulent past of Dogra jewelry to include the myriad ornaments like Gold Bindis, silver combs, silver parranda and silver ear buds to mention a few and widely in use by the Dogra people during those times. But her revealing of the fact that Dogras were probably the only ones to use silver tooth picks to scratch their teeth and use silver ear buds to scratch the wax from their ears must be shocker to all of us including the readers.

The book contains a magnificent chapter on ‘Dogri Reetein” or Dogri rituals  by Chetna Mahajan who very succinctly chronicles the various events, subjects, items and rituals etc associated with child birth in a Dogra household. This chapter assumes all the more importance in the light of the fact that western influence has corroded our age old values impinging upon a child right from his/her birth which he or she remembers for posterity. This masterpiece of book has a wide spectrum of subject matter which like a pendulum moves to and fro in the land of Duggar Pradesh touching every aspect of the people residing in this region. The subject dealing with ‘Akhnoor Terracota” by Dr Sunil Khosa reminds us of the rich Buddhist heritage of Jammu region, thereby awakening the world of Jammu’s contribution to the religion of Buddhism. Subsequently various topics like the historical ‘Gulabnama’ by Ms Gharo Choudhry as also by Dr TR Bhoi and DrJigar Mohammed dwelling upon sculpture, monuments, and sufi shrines of Jammu region put focus on hitherto unknown facts of this region .

The various research papers like the one by Dr. Dinakshi Devi, Dr.Anupama Pandotra and Dr. Joyti Parihar have touched unconventional subjects like folk people of Saraaz (Doda) and indigenous medicinal heritage of Duggar region. Work on such off beat topics is far and few with notable exceptions like the present book. Dr.Hema Agarwal in her seminal paper dwelling upon various gastronomical delights of Dogra land when combined with Dr. Jatinder Kaur’s dogra literay heritage is a heady cocktail to be savoured at leisure . The book under review has surprising inclusion of works from Professor Vijay kumar and Roshan kumarof Banaras Hindu University the two non Dogras, contributing to the origin and growth of Buddhist art and architecture in Jammu. The same when read in conjunction with Dr Sunil Khosa’s work on Akhnoor Terracota will give us a view that Buddhism had a formidable footprint on the terra firma of Duggar Pradesh a fact unknown to most of Indians.

Adding more variety to this whole panorama of Jammu as being unfolded in the pages of this master treatise is the quint essential coverage of military prowess of the gallant Dogra soldiers down the ages. A mention of such a fine race always acting as the ‘Sentinels of our northern frontiers” is but a small token of their unstinted and unqualified support to the cause of nationalism.An all-encompassing book like the present one missing on such a vital aspect of Duggar land would have been a travesty of justice, which has been rightly covered by Colonel Lalotra in chapter 20. With the bifurcation of the erstwhile state of J&K into 2 UTs, itis once again emphasized that center wants to deal this sensitive region in a piecemeal manner with direct governance from Delhi. Well if that be the case then I am sure this book will go a long way in unraveling the Duggar Pradesh as the ‘Sine quo Non’ of this region for any forward movement in assuaging the hurt sentiments, since the book portrays immense possibilities that this region holds.

The publishers of the book-‘ Oberoi Book service’ based in Jammu have indeed done a yeoman’s service by taking out this marvelous fast paced literary work interspersed with an equally excellent pictures which go hand in hand in detailing the course of events ,places, objects as found obtained in the Jammu region.  Though priced slightly at a moderately high range of rupees 1695/ ,I am sure when weighed in with the value this book brings along folded in its pages, the cost seems negligible to an avid reader. Recommended to be adorning every personal library of a voracious reader the world over.

(The writer is a retired army officer and RK Columnist. He and can be approached on his email: slalotra4729@gmail.com)