Declared unsafe for movement, authorities yet to start work on the Sakhras bridge 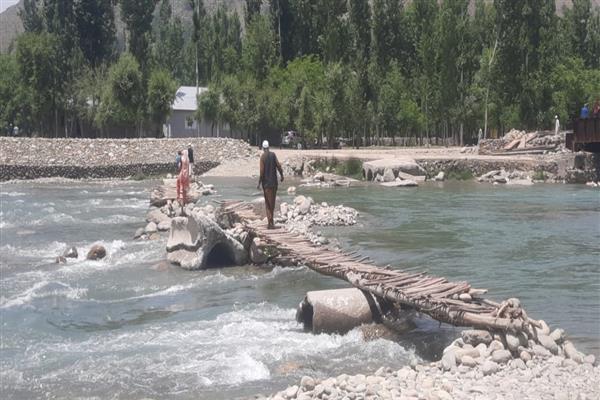 Anantnag, June 21: Dozens of villages on either side of the SakhrasFohar bridge have been disconnected for months now after this vital steel bridge was closed and subsequently part of it dismantled following the authorities declaring it unsafe for any kind of vehicular traffic.

The steel bridge constructed years ago was a hassle-free link for thousands of local commuters and tourists heading to or from Pahalgam towards Anantnag district headquarters.

"The closure of this bridge has severely affected the office goers and student community. Earlier it wouldn't take more than 15 minutes to reach Srigufwara from Akad but now the same distance takes more than half an hour amid traffic congestion from an alternate route. The locals on their own have constructed a makeshift wooden pass over the fast-flowing river which is very risky, especially during the rainy days", says a local businessman, Waseem Mir.

Sakhras steel bridge would serve as an important link road and in the event of a traffic jam on main K P Road during tourist season would be used to divert traffic.

"Authorities had promised to get the Sakhras bridge operational before the commencement of the annual Amarnath Yatra pilgrimage, however, there seems no headway in this matter. We would usually take the Srigufwara route from Akad if there would be a traffic jam, but since the part of this bridge has been dismantled there is every possibility of traffic congestion now when there is already such a huge rush of local picnic-goers and tourists from across the country", said a cab driver, Irshad Ahmed.

An insider in the Roads and Buildings department said, "Most of the men and machinery of the department has been deputed to Pahalgam for Yatra preparations because of which the repairment on this bridge has been shelved. Once the Yatra commences, the management of traffic in the absence of this bridge will severely affect the smooth movement of vehicles, especially at Akad."

Assistant Executive Engineer, Division Anantnag, Qazi Javed, did not respond to the call of this reporter.