Danish’s second take as film-maker results in “Half Widow” 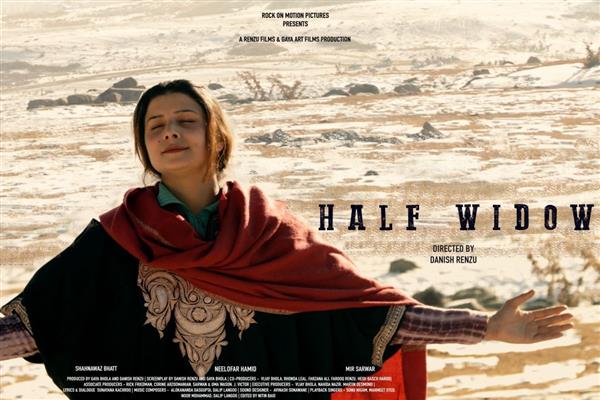 Conservations around cinema may sound absurd, even heartless, at a place like Kashmir. There is one defunct cinema hall, a few meters from the park where the Valley’s Half Widows organise their monthly sit-in for years now. The faces are familiar to the passersby. And all they can do is move on as they recite a silent prayer!

US-based Kashmir-born film director and screenwriter Danish Renzu went ahead to make a film around the fortitude of these women.

Set in the turbulent 90s and amidst heavy militarization of Kashmir, Renzu’s "Half Widow" is the story of a newly-wed Kashmiri woman whose husband is picked up from their home one night during dinner by the Army.

“When researching on the stories from Kashmir, I was quite moved after attending Half Widow rallies in Srinagar and deeply affected by the state of limbo these women were stuck in for decades. I decided to make a film on their healing and coming out of suffering.  And “Half widow” happened,” says  Renzu.

He debuted with “Half Widow” which premiered at the prestigious Seattle International Film Festival. "Half Widow" started with a short-film and ended up to become a full-fledged feature in 2018.

His second feature, last year, “The Illegal” featuring Suraj Sharma from the Oscar-winning film "Life of Pi" won a Jury award at Mumbai International Film Festival and was nominated for best narrative at Austin Film Festival.

Alumni of the University of California, Los Angeles, Renzu has opened his own home production in Kashmir. His goal is to revive cinema back in the Valley, encourage youth and local talent and also to bring forward the lost culture, music and traditions of Kashmir to a worldwide audience.

Renzu says he hopes to inspire a new generation of Kashmiri filmmakers to practice their art as a force for unity in the conflicted region.

Tell us about your growing up in Kashmir and moving to the US.

I grew up with a camera in my hands. I was always intrigued by films and the process behind storytelling. So my hobby ended up making films with my friends and family members.  Unlike my other friends who played cricket, I made films. I moved out of Kashmir at the age of 18. I went to the US and it was a lifetime opportunity for me. It did open a lot of doors for me because I was coming from a small town in Srinagar and I finally got a chance to live the American dream, which I had never imagined. It changed my life big time. It also made me explore my dreams and realize them and live the American dream. So, I am very blessed with the opportunity.

How did filmmaking happen to you and what has been your inspiration?

I think it started when I watched a film in a theatre for the first time. I was very overwhelmed by the projection on the big screen, sound and the whole experience of watching the film. I was intrigued, curious and fascinated. I still remember it was a film in a theatre in Jammu, and I couldn’t stop thinking about the experience for days. I wanted to go back. I am inspired by filmmaker Majid Majidi. I have seen a lot of Iranian films and I always wanted to make films based on human conditions in a beautiful landscape such as Iran. I felt like Kashmir is a beautiful place. It has beautiful landscapes, language and culture. I wanted to create a similar cinema in Kashmir Valley.

How did your passion turn into a profession?

It happened in the US, where even when I studied electrical engineering, I made films on the side. I did many short films. From raising money to production to post production work and to their release, I used to enjoy the entire process. It was when my short film, “In search of America”, which was shot in 2014, got a lot of love and praise, I decided to stick to filmmaking and switch careers.

I must tell you, I was working in a company for five years. Since quitting my job and pursuing filmmaking as a career option, it has been very difficult. I have only made two feature films so far and it has been a process. It is a journey in itself and managing to fight the odds are basically how ready you are to take up the challenges and finding solutions and at the same time continuing working forward, creating projects, creating job opportunities for yourself. So, it is actually a balance of doing good cinema and at the same time being open to commercial space in order to afford this career.

Tell us about the training and exposure you got abroad.

I learnt everything by doing. Yes, I did study screenwriting in depth and came out of UCLA writers program with two full feature screenplays. Most of my experience and exposure came from actually doing films.  I wasn’t only involved in the capacity of the director, but ended up writing, producing, line producing and even raising funds for my film. It wasn’t an easy journey and I learned a lot. Getting my first break was very difficult. As we know that independent filmmaking is not a piece of cake. It requires a lot of patience and struggle. It is an unending journey to get your film funded, right from the script level to the post-production. ‘Half Widow’ was completely crowd-funded. A lot of time was spent raising the funds and then actually releasing it. I think we just kept going forward and we didn’t stop.

Why did you return to the Valley for your debut?

Of course being a Kashmiri, I strongly felt my first feature had to be set in Kashmir about Kashmiri people. I think “Half Widow” has been the best work so far. It was my first film. I was new, fresh, full of emotions. All the actors were really supportive. It was all about Kashmir. It was my first feature so it was very special to me. It received appreciation from all quarters. People were able to connect with it universally. My next film, that I will announce soon, is also set in Kashmir.

How feasible is Kashmir as a place for creative arts including filmmaking?

It’s tough and comes with a lot of challenges. But there is a lot of talent.  They just need grooming and a platform to showcase their talent.  I did do a lot of work even during quarantine in Kashmir. I was really lucky to open my line production ‘Renzu films’. We did a lot of projects since there were not many cases in Kashmir. We were able to make a lot of content in the Valley. I have been really busy since July this year.

Tell us about the making and conceptualizing the “Illegal” and what got Suraj Sharma excited about the film.

“The Illegal” is based on true stories from Los Angeles most of my own immigrant experience as a student in America. It was the first script I wrote and became more relevant back in 2017 when Trump came into power and topic on immigrants and their stories were more in the limelight. Suraj was my first choice so we reached out and he right away connected with the script and the film happened. They say movies are miracles so that’s that.

What's your vision for Kashmir?

Kashmir needs progress and reform. Youth are so talented and we need to see that on an international platform. Kashmir needs peace.