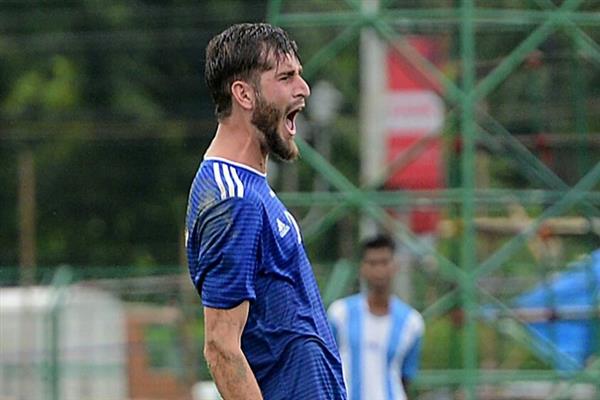 During his childhood, Danish Farooqused to accompany his father to play football at Eidgah - a ground in the downtown area of Srinagar. With time, he developed an interest in this sport and took it seriously till he made it to international arena.

Hailing from Safa Kadal area of Srinagar, Danish is now a role model for many budding footballers in the valley.

He says, during his childhood, people would suggest football is to be played for fun and should be taken just as a game as one cannot make a career out of it.“But I still went for it while ignoring them all.”

Danish has come a long way in his football journey.His performance for Bengaluru FC earned him maiden call-up recently in the 25-man squad chosen by national coach Igor Stimac to play against Bahrain and Belarus in two friendlies on March 23 and 26 respectively.

“I signed with Bangalore FC last year and made my debut in Indian Super League (ISL) in November 2021, and I become the third Kashmiri footballer to play the premier tournament after Mehrajuddin Wadoo and Ishfaq Ahmed,” he says.

He says that coming from Kashmir and making it to a tournament like Indian Super League (ISL) is never easy. It needs sheer hard work, devotion, dedication, and discipline.

“The coach in the academy worked very hard to train not only me but other players as well who had been selected in the academy. We learned the main basics of football in the academy, coach did not confine his training to on the field but off the field as well,” he said, adding “one must have very strong basics.”

After spending two years in the J&K Bank academy he was selected in the Senior J&K Bank team where he became captain of the team.“Then I played for Lone Star FC in U18 as well,” he says.

“I was part of Real Kashmir FC where I showcased my talent as a Kashmiri boy in the second division I-league. And I am grateful to Almighty as I was part of the team then, who lifted second division I-league cup played at TRC ground thus the club qualified for first Division I League first time while creating history in J&K,” he said, adding that for the team first division I league remained quite satisfactory and good for the club as well.

After playing for the Real Kashmir FC for three years, Danish got an offer to play in Indian Super League (ISL) a professional league for representing Bengaluru FC.

“ISL remained good for me where I scored three goals and assisted in two and I also succeeded in bagging fans player of the season award as well,” he says.

Despite it being the first season in ISL, with low expectations from debutants, the season turned out to be very fruitful for him.

“I am determined to work hard further to maintain consistency in my performance,” he said.

Sharing feelings for getting selected in the final list of the Indian national team Danish said that he is very happy that was named in the team of 38 players earlier.

“But I am one who made it in the 25 players final list who will represent the country in this international arena,” he says,” and added “It is a proud feeling not only for me but for other people who kept supporting me. I am very happy and excited after knowing that I have been selected in the final list.”

He further said that as he obviously had been working very hard for the past several years to reach such a level.“I had a passion for playing highest level football which is a dream come true for me,” Danish told Rising Kashmir.

He further stated that he would even work harder to maintain the position he has attained so far so that he could be selected in the national team to represent the country in the upcoming international events.

“They must heed what senior players, especially coaches are saying to them as they have already seen and experienced various phases of a football career, which for budding players proves helpful and hence hone their skill further,” he added.

While emphasizing on the promotion of football culture in every nook and corner of the valley he says that there is a need to focus on the grass-root level as much as possible as the best age for playing this game is five to six years, which is common in other parts of the world where football is a prominent game.

Throwing light on the role of good coaches in honing the skill and talent in players he says that it is the coach who identifies the strengths, qualities, and weaknesses of the player.

While emphasizing on training football kids from an early age, he says that in the modern football era children learn football from the age of five to six, where children are being asked to enjoy football without having any kind of pressure as the focus remains on making their basics strong.

He says in his case he was very lucky to have family support from an early age.“My parents have always been supportive to me since the very beginning of my football journey.”

Talking about the importance of Infrastructure he says that the role of infrastructure is very important for producing professional footballers. Players must be provided with good natural grass grounds as the game cannot be confined to only TRC ground.

“Most of the matches are being played on the synthetic turf TRC only. Though we have natural grounds like in Eidgah ground, SP College ground, Amar Singh college ground which was good ground earlier but the condition of these grounds have dilapidated which needs to be maintained again. So, that player can play matches regularly without hindrance as players in the valley are very talented,” he said.

Danish, while appealing to Sports authorities said they must put efforts into the maintenance of natural grounds so that players can play there as this will help us to produce more footballers in the valley.