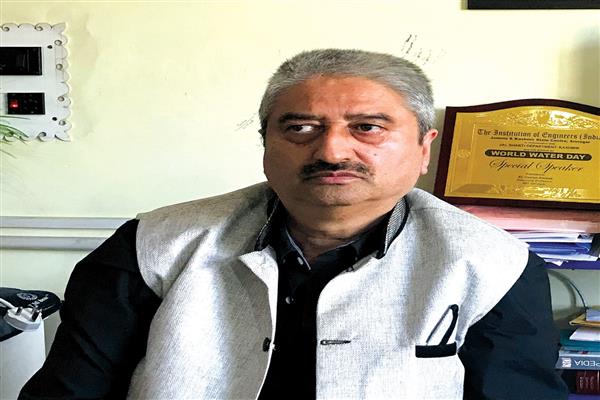 With an aim to cater the needs of a common people, Danish Ahmad has made innovations based on sustainability and to improve the living standards of people. From Electric Kangri to Instant Water Filter, he has a number of innovations to his credit.

Working as Associate Professor in the Department of Civil Engineering, National Institute of Technology (NIT) Srinagar, he has a knack of making innovations in the field of electronic, mechanical and electrical domain as well.

“I have been interested in innovations since childhood. At home, I would repair the things which wouldn’t function properly. I would modify them as per the needs and make something new,” he said.

With his growing interest in innovations, he set his own workshop at home and started changing his ideas into innovations.

“In our life, we keep doing Jugaad or hacks with various gadgets and appliances to make them better, affordable or increase their utility. All these hacks are innovations and many of us do it consciously or subconsciously,” he said.

He said, he has been granted patents for three of his innovations so far, as he has filed it for 14 innovations, others are under examination.

As most of his innovations are energy-free, they aim to function in the areas where electricity is inaccessible. He said that power saving is helping the ecosystem in getting better which reduces the carbon footprints and also decreases the pollution.

“Solar energy is in abundance and there is a need to make use of it. Solar water heater, solar water cooler, walking stick mobile charger are some of the devices innovated by me that can be of great importance in the areas where electricity is not available,” he said.

While talking in detail about Electric Kanger he said the traditional Kanger works with coal and the emission of smoke has always been an issue. “With warmth, we get exposed to a lot of harmful things which have hazardous effects on our health. Most of us prefer to take blowers but it takes a lot of power to function, typically 1000-2000 volts.” he added.

Keeping the low voltage in winters into consideration, he made an Electric Kanger which takes the power as much as required by a single bulb to function. The advantage is that one can also use it on an inverter and it can warm up the space within 15 minutes. Also, a user can keep it under a blanket or pheran.

His Modified Low Cost Solar Water Purifier can purify a glass of water in less than a minute and the patent for the innovation has already been granted.

Some of his devices are good for the travellers and for the people who are always on the go as they are light in weight and portable.

As one such device, Solar Water Cooler for Remote Areas works on the batteries and can also work over car batteries. For treks and camps, the device can be of good use and the patent has also been granted for it.

“These are off-the-route things. In areas where there is no water or electricity, many things can be innovated. There are many innovations happening but what makes your innovation different is doing what others can’t think of,” he said.

Another innovation is the earthquake alarm which is based on microwave technology. It alerts about the mild tremors which happen in the beginning of the earthquake.

“The more sensitive your alarm is, the better it is. The microwave technology is very sensitive and it alerts you by producing a loud sound,” he said.

The device is to be kept at a very quiet place and has a pendulum. The loud siren of the device can alert the neighbors as well, he further added.

Being a civil engineer doesn’t restrict him from making innovations in other fields, he said, “The interest drives a person to do anything.”

Talking about his ability to make innovations, he said that he takes it as a hobby rather than a compulsion. “I enjoy the time that I spent in the workshop. While working, it sometimes gets to 12 p.m. or 1 a.m. in the night.  When something strikes me, it stays in my head all the time unless I don’t make it,” he said.

The ideas for the innovations come to him naturally. “If I think of making anything, I take something and see how I can modify it? What can be done for a common person so that his work can be eased?” he said.

During the period of pandemic and amid lockdown, he utilized most of his time in making innovations.

Taking the affordability factor into consideration, he said that the materials used in making the innovations are very simple.

“An innovation should be affordable to cater the areas which are not developed. I have tried to keep the prices very less for the underprivileged people,” he said.

Apart from making innovations, he has written a number of books for the engineering course as well.

The books written by him are Solar Water Utilization, Innovative Mindset- a book about how to innovate which is published in 8 countries including Spain, Germany, Italy, France etc.

Water quality- Testing and Treatment published in 10 countries including US, UK, Denmark, Australia etc. The books are available on Amazon and kindle as well.

He has been working in the department for more than 30 years. Having pursued his engineering in NIT Srinagar, he believes that the students have pressure on their studies which limits them to do things outside of academics.

Believing that mindset is very important, he said that if a person applies his mind towards something, he can get patents by doing small innovations as well. He believes that the involvement of industries can boost an innovator.

He said that the innovations can be done by anyone, not necessarily a doctor or engineer. “The innovations should be applied to the areas when they are needed. It starts with a person. It starts from the inner self and then one can go to find platforms to promote it,” he said.

NIT has a space for innovators called Innovation Incubation Entrepreneurship Development (IIED) center where people get their ideas, fabricate it and then the products get into market.