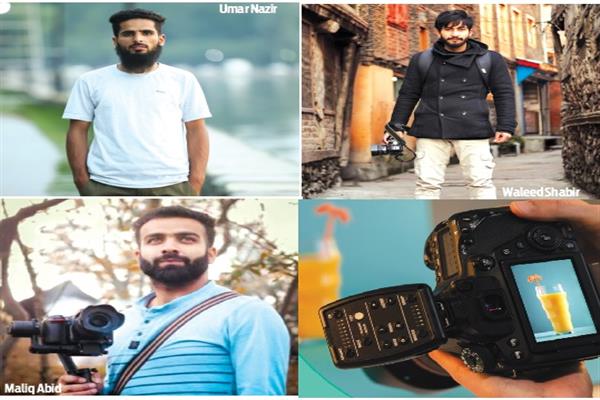 There are many Kashmiri youth who have turned into content creators and have created a space not only for themselves but providing jobs and opportunities for others.

Among them is Umar Nazir, a 25-year-old content creator who has made a name in the field of content creation with his art, hard work and dedication.

Hailing from Srinagar, Umar started capturing his surroundings by his camera when he was in class 12th. In 2016, he left work at his mobile shop to engage himself fully with camera work.He sold his two-wheeler and brought a camera after he was impressed by a friend’s photography skills.

“In 2017, it was a sudden decision and one of my mobile photographer friends showed me his best photo. I loved its composition and it inspired me to be a photographer,” he said.

Besides being certified by many reputed Visual organizations, Umar’s work has also appeared in Airtel, The Quint, Samsung and J&K tourism. He was also chosen as the galaxy creator by Samsung which was the moment that boosted and energized him.

He also owns a production house named Pixellence Production which is meant for wedding shoots and other assignments. His production, located in Chanpora, Srinagar,is a source of employment to five persons including a photographer.

Umar is in a process to start an initiative helping local businessmen to make short video advertisements on low budget.

Umar has 80k followers on Instagram. He makes interesting reels by going to different places in Kashmir. Recently, he uploaded a reel on Instagram about Gurez valley in north Kashmir which has got 42 million views.

“I explore many places in my reels and it is lovely to see new places. People call me from different places after seeing my videos which is very encouraging,” he said.

Umar said there is no second option to hard work. He has he purchased equipment worth Rs 10 lakh including drones and cameras which have also become a source of income for him besides helping him to create quality content.

Apart from this, he also takes aerial pictures and then prints them. Many people purchase pictures from him. “I recently took a picture of downtown Srinagar which was widely shared on social media. I also sold its prints now,” Umar said.

“There have always been challenges. I try to be strong every time. The Covid-19 pandemic was a major challenge in my journey as it affected people across the world. My livelihood and profession was also affected. I used to spend most of my time with my family. Many bookings were canceled and to leave home was risky. I used to go for photo shoots and wedding shoots to keep my mind fresh and my profession alive,” said Umar.

Umar said Kashmiri youth have talent but lack of exposure.“I have seen many beginners shooting the perfect and creative cinematic shots but they are limited, primarily because of the equipment and support,” Umar said.

“I want to tell them to never lose confidence, keep working and learning. In camera work and filmmaking, we need to upgrade and utilize our skills and keep upgrading with new techniques to show our subject to the audience. The more skilled you are, the more you will sell. I believe in learning and nobody in this world is a comprehensive cinematographer,” he said.

Waleed Shabir, is another freelance photographer and a content creator from Nowgam, Srinagar. He has been into content creation from the past more than ten years.

“My friends on Instagram, who were already working as content creators motivated me a lot to take photography as profession. I took content creation as a challenge. It is a different thing from what I had been doing before,” he said.

Waleed has been working as a freelance and independent photographer for a long time. Currently, he works for Samsung India as a Galaxy Creator.

“There are many content creators. You have to be different and unique. They should build a strong social media community. And then the companies will reach out to you or you can reach out to them,” he said.

Amid the expansion of internet and gadgets, Waleed said, in today's world, content creation plays a huge role. “Literally, every company and business focuses on making online content to increase their sales and the internet is full of content,” he said.

For Waleed, every day is a new struggle. “I have learned a lot in these years and there is so much more to learn. So far I have only worked in Kashmir,’ he said.

Similarly, Maliq Abid is an other content creator who hails from south Kashmir’s Pampore area. He loves to capture the beauty of valley in its scenic glory.

From capturing colorful weddings to crowded streets to secluded destinations, he has showcased his photography skills as well as Kashmir’s rich culture in an elegant manner.

An engineer by profession, Abid took to photography from an early age. He narrates how he used take the family camera to take pictures in 2013.

Later, he along with his friends managed money to buy a DSLR camera and began a journey in 2014 that is going on to this day. He said that his first camera helped him to learn a lot about photography as he got into every minute detail about the new DSLR camera.

Gradually, he became well versed with technical aspect of photography while also getting accustomed to the artistic part as well.

Abid stresses that anyone can pick camera these days and click some photos but it is about how you make a photograph stand out from the rest that matters.

He said one should know the techniques of photography and pursue their passion with full vigour. Abid has worked for many companies and brands where he created content.

The photographer from the Saffron Town suggests that knowing the different aspects of photography is vital and every shutterbug should first go through a learning curve.

Apart from this, Abid said, it is a matter of concern when people use photographs on social media of various cameramen but don’t give proper credits.

He said a photographer goes through pains to get that one perfect shot and then to see others use it without giving any due credit is unjust and this is a practice that should stop.

“Kashmir is heaven for anyone willing to become a photographer as there is no shortage of inspiration, scenes and moments waiting to be captured in time,” he said.

Clicking photos became a passion for Abid and now a profession but the road wasn’t always easy.

“Support from family will come once you convince them about the growth of your work and that can only be done by changing words into action,” he said.

Abid’s photography is being appreciated all over Kashmir and hopes he will soon bring laurels to the valley through his work.

“There are many companies and brands who look for quality content which they want to promote. Now there are lot of opportunities in photography and social media is the best platform to sell your content,” he said.