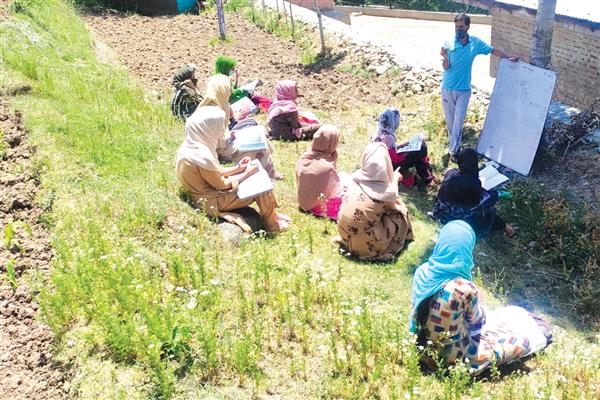 The months-long shutdown of schools due to coronavirus has inspired teachers of the valley to adopt creative ways to reach out to students. From making creative videos and audios to holding open space classes, the teachers have offered selfless duty towards the society.

Roohi Sultana, a government teacher from Srinagar, makes creative audios and videos for her students. She explains chapters to her students in a story telling way, sometimes imitating the voice of a lion and sometimes a rat. The poems are sung by her in rhyme and rhythm so that students listen again and again and learn the poems.

“Earlier we didn’t know anything about what’s happening. We thought it’s the end of the world. Then the Department of Education started our training regarding online classes and we came together and found a hope of moving forward in the pandemic,” she said.

For a single mistake, she had to make her e-content multiple times until she achieved perfection.

Roohi, who is a specialist in Early Childhood Care and Education, believes that the students should not get bored but should enjoy the lesson.

“We have gone door to door for classes and taken community classes in tents when the weather was good. Sometimes we hold morning assemblies and parents prepare students for it. For those parents who were uneducated, we had to give them home assignments. My room has become a workshop. When we are really into something, ideas come by themselves,” she said.

Roohi is also famous for teaching her students in a play way method and uses scrap material for activities. She was awarded the National Teachers Award with 47 other recipients by the president for creative and innovative way of teaching. Another award was given to her by zero-investment innovations for education initiatives launched by Sri Aurobindo Society.

In September she received four Nokia phones from The Better India. These were for students who had never seen a phone so that they could learn about technology. Roohi was one among the 12 teachers selected all over India. The class was divided into groups where Roohi taught them about zoom classes, shot pictures and videos, read newspapers, weather forecast, Google search etc. “Students have also learnt how to make e-content. I didn’t know about technology earlier but I have taken help from some experts and I also teach my students now,” she said.

Roohi believes that a woman can do wonders when she has support. She said, “Parents need to support their children, especially daughters so that they can get strength for every task. I have adopted these children. I learn and make them learn too because when your spirit is high, nobody can stop you.”

As such most of the students studying in government schools don’t attend online classes because of having no access to smartphones and internet facilities. The initiative like community classes has helped students to move forward with their studies.

As the situation started getting better, the idea of replacing online classes with open classes came to some like-minded teachers in a Zoom meeting. Umar Rashid Bhat, a government school teacher from district Baramulla along with some of his fellow teachers started teaching students in open spaces.

“With time everything came on track, but the education sector was badly hit. Students in government school had no access to smartphones whereas some had a common phone. So, we had limited time in the morning and evening which we used to utilize in teaching as their parents had to go for work. We couldn’t get satisfaction this way. To compensate for the loss, we thought of conducting classes in open space which were called community classes later on,” he said.

While following all the precautions, community classes were held in open space with the consent of locals of the area. Spaces of mosques and Auqaf committees were utilized, students were called and had face to face interaction with their teachers but it was not an easy task. Initially, they faced a number of challenges; convincing parents was the biggest task.

“We started counseling parents and the local authorities of the village. People were scared of getting infected. We told them that we attend gatherings, so why can’t we start teaching students and also assured them about the preventive measures,” he said.

Once the space was allotted to them, some teachers and volunteers contributed to purchase masks, sanitizers and other essentials. The furnishing of darazgah (Islamic seminary) was used to sit on. On the first day of the class, only 4 students turned up. Then the information about open classes was disseminated on loud speakers of the mosques and more students started turning up.

“The attendance in higher classes is almost 90-95%. Due to the availability of the traffic, many teachers came and participated in community classes. CEO of the district, Ghulam Mohammad Lone also showed interest when we sent him the videos and pictures of our work. Support from officials is very important. If you want to do something, nothing is impossible,” said Umar.

The students of government school don’t get proper guidance in studies at home. He said, “To compensate we have to play multiple roles like teacher, parent, friend, guide and whatever the situation demands. We have to make them do their homework as well and we have to do it as we are paid for it.”

Earlier during the pandemic, Mehraj Sufi, another teacher from Baramulla used to take classes with his students on conference calls. He felt that the capabilities of the students did not match with the grades they were in. “Even though the students were passing classes but were not really competent. Because of the learning gap, they were not even showing interest in their studies,” he said.

After being dissatisfied with taking classes on call, he started open classes and has been teaching in two shifts, one in the morning and the other in the evening. “We had to focus on each student. We divided them into shifts so that we can give equal attention to all of them. We had to give extra effort to students so that they find their studies interesting,” he said.

Despite being in an open space where there is no blackboard and no seating arrangement, he had to convince his students and their parents for it. “Female students were reluctant initially as the classes were held openly but with time, everybody started joining classes. There were other issues faced by us but we were doing a good job and we knew we would be successful,” he said.

Whenever the weather was bad, the teachers used to take classes in their homes. “The students can’t be taught in open space for a long time in winters. We take them to local Darazgah or to our homes. We make sure they are safe and they don’t miss any more classes,” he said.

A private school teacher, Mohammad Dawood Rather involved the children from his family and the toddlers who have never been to school in community class. Feeling children’s disconnection with teachers and school, Dawood felt that such students are not only lacking in education but they are also not able to learn about ethics and moral values.

The school routine that the students have lost, he wanted to bring back with his community classes. During the initial days of classes, he said, “When we saw children after a long time, we were surprised to see that they were not able to recognize their fellow classmates. Also, the class discipline was ruined.”

The community classes are held for two hours in a day and he feels he is able to see change in his students. “We are not able to spend much time with kids but in the short period, we try to give them the best,” he said.

Dawood ensures that no student misses any class. “If a student remains absent, we call him and ask about his absence. The parents in the village are not that educated and students couldn’t get guidance at home. When such students miss school, they face a lot of problems in future.” he said.