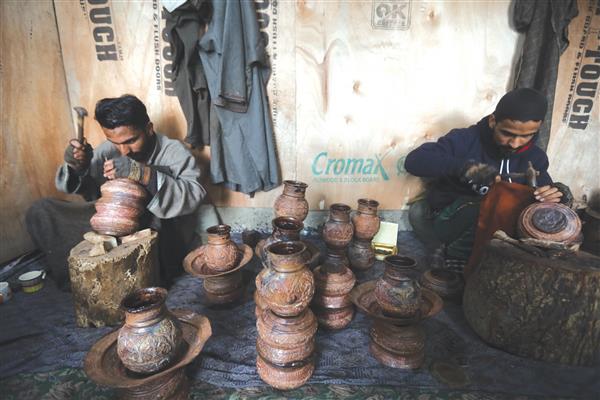 Kashmiri kitchens are incomplete without the copper utensils locally known as ‘traam'. These are such an exquisite utensils that from decades, the people in Kashmir gift each other the copper utensils, be it the occasion of marriage or other moment of happiness.

However, the making of these beautiful utensils is a cumbersome job. In Kashmir the coppersmiths (Thanthur) have been into trade from decades who earn their livelihood through this art.

The process of making a copper or brassware goes through many artisans as initially a coppersmith beats the raw metal into soft objects and while he finishes his work the further process of the making of copper utensils and showpieces, then goes to a calligraphic artist (Naaqash) who carve the pattern and designs of that copper object.

Mohammad Yousuf Kakroo, a coppersmith of Kawdara area in old city Srinagar said that his whole family including his two sons are associated with this art.

He said, “One of my sons Khurshid Ahmad has completed his masters’ degree in Mathematics and is working in my copperware workstation as a hammer man.”

60 year old Kakroosaid, “I am President of the Coppersmiths association and from the last 42 years I have seen many ups and downs in this trade. But from past few years this art seems to be at the verge of extinction only because of the adoption of the machinery to manufacture copper utensils.”

The demand for copper and brass articles have decreased as people prefer to buy machine-made copper utensils which they are getting at a low price but are unaware of its strength and duration, he added.

Like any other place, Kashmir too adapted to new technologies and trends from time to time.Designing copper utensils by machineshave rendered thousands of artisans, who used to do handmade designing on copperware, jobless.

Kashmir's copperware is declining due to machine made items which is not only damaging the traditional craft of Kashmir but also snatching the livelihood from number of artisans.

Manzoor Ahmad Baba, a coppersmith, hailing from downtown area of Srinagar, said, “The reason this art is coming to an end is due to the lack of craftsman and skills. The new generation is least interested as it is laborious and requires a lot of patience.”

“The uniqueness of each piece created by the hands of an artisan are the things that cannot be replicated by any machine, but people are preferring machine made copper due to the low rates,” he added.

Kashmiri coppersmiths were known for producing excellent items of copperware consisting mostly of cooking utensils and samovars for the household. With the advent of machines, the traditional copperware of Kashmir is losing its name.

Dozens of copperware traders at downtown’s Zainakadal area of Srinagar said that many of the copper traders have closed their business after some businessmen started selling machine made products.

In order to tackle the machine rendered copper utensils, Mehraj U-Din Mir, a coppersmith strikes hard raw copper to enamel and furnishes fine crafts of copper things like utensils and other showpieces.

Hailing from Rajori Kadal in Srinagar, Mir, said that he adopted the copper art from his ancestors and has been in this profession for the last 32 years.

Mir added, “My father and grandfather were also working as coppersmiths and my father had trained me to make new patterns and designs of the art.”

He further said that machine made copper utensils had left thousands of technical hand artists jobless and the art at the verge of the extinction. “The customers get the machine made utensils at a low price but they are not able and aware to differentiate the strength of handmade and machinery copper products,” he added.

The trade and craftsman are mostly confined to old city areas.The main copperware business is setup in Srinagar’s downtown area with its markets at Zainakadal, Rajori Kadal, Nowhatta, Sarafkadal, and along Nallahmar stretch.

The uniqueness of this metal is that it is soft and it’s good heating properties make it best suited for all kitchen cookware.

Another coppersmith, Javaid Ahmad Shah, 45, a resident of Rajorikadal said that he has been in this profession since childhood and is specialised in making traditional Kashmiri samovars. “Even though the machines have replaced the artisans but they are incapable of replicating the charm of handmade copperware,” he said.

He further said, “I am deeply worried if this traditional craft will last in Kashmir as it is struggling due to emergence of machine-made copper items.”

Recently, the Kashmiri copper workers Trade Union demanded a ban on machine made copper items and pressed for action against those who are making copper utensils on machines , which they described defaming the centuries old copper handicraft art.

They urged the authorities to look into the gross violation of the copper act 2016 and also requested the police to take action against those who are involved in its manufacture and trade.