“The greatness of a nation and its moral progress can be judged by the way its animals are treated.” Mahatma Gandhi 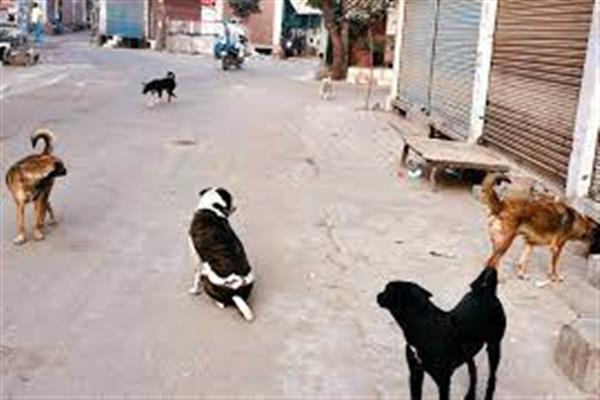 Stray Dogs are un-owned, free-roaming and shelter-less which live on the streets, parks, around hotels/ restaurants, school and college, hospital, bus and railway station premises and in other public places, in close contact with humans. The reason for their large population is due to the unique combination of local tolerance, abundant food, shelter, breeding opportunities and ineffective local dog management policies. Most of the people look at them as a menace and a threat. Few unfortunate incidences of dog bites have demonized and turned people against them.

Stray dogs, usually do not attack/bite unless provoked, sick or when in severe distress/ pain. The relationship between humans and dogs has co-existed for more than 15,000 years. Canids are opportunistic and adaptable creatures and if food resources are made readily available because of poor kitchen waste management, dog populations will proportionately increase. These dogs can have a good quality of life in some respects as far as animal welfare issues are concerned as they are free to express their natural behaviour and can make choices about their own lives and wants.

But they are exposed to high risks and may suffer from diseases that cause pain, discomfort and suffering, such as mange, etc and are also at risk of injury and vehicular accidents. In some places, stray dogs might be considered ‘community dogs’ with no specific owners but the community cooperates to provide food, water, shelter and basic care for them and they in turn provide many benefits like companionship, security and assistance. There is also research evidence of the positive effects dogs have on human health and well-being. Despite these benefits, dogs can cause some other concerns in communities especially when they are free roaming like zoonotic disease transmission, road traffic accidents, etc. As per the rough estimates stray dog population in district Srinagar is approximately 60000 while as in Jammu city it is around 50000 only.

If we do not like dogs or cannot help them, we should at least not abuse them and raise our voice for their rights. Extending our sociability and emotions towards dogs can help us develop a better sense of empathy for them and it is our moral and ethical responsibility to be sensitive towards their physical as well as emotional well being. It is unacceptable to remain a mute spectator to animal abuse. In such cases, one shouldn’t hesitate to intervene, object and report to concerned authorities like the police/ animal welfare institutions/ animal welfare organization/ local authority/ NGOs/ animal activists, etc. Since animals are inarticulate, we as evolved species need to step forward and protect them to the best of our capabilities.

With the efforts  of Administration all the stake-holders have been consulted comprising of senior-most officers from Housing and Urban Development Department, Finance Department, Animal Husbandry, Urban Local Bodies, Municipal Corporations, representatives from Animal Welfare Board of India/ UT level Animal Welfare Board, etc which are constantly working for control of street animals (dogs) in accordance with Animal Birth Control Dog Rules 2001, under which Srinagar Municipal Corporation in collaboration with SKUAST-K is carrying out Animal Birth Control (ABC) Programme at Aluesteng/ Tengpora (to be made functional) with approximately 60 dog sterilization capacity per day while as Jammu Municipal Corporation in collaboration with Animal Husbandry Department is carrying-out ABC at Roop Nagar with capacity of 55 dog sterilizations per day.

“Dogs do speak, but only to those who know how to listen”

Culling Dogs are NO Answers! Dogs are part of our ecosystem and are not encroachers on earth; there is no question of eliminating them. It is the duty of every citizen to have compassion for all the living creatures including dogs.

Multi-pronged dog management policies need to be formulated and implemented, which are designed to offer an ethical and effective alternative to culling and they require long-term commitments. Such policies need to be framed with certain objectives – to improve health and welfare of owned and stray dog population, reduce numbers of stray dogs to an acceptable level, promote responsible ownership, assist in the creation and maintenance of a rabies immune or rabies free dog population, reduce the risk of zoonotic diseases, manage other risks to human health (e.g. parasites), prevent harm to the environment and other animals, etc.

While framing such policies, following proposed, specifically-tailored, management interventions need to be considered:

(1)Identification and Registration of dogs (licensing): More efforts need to be made to strengthen Dog Breeding and Marketing Rules, 2017 and Pet Shop Rules, 2018.

(2) Augmenting Animal Birth Control (ABC) and Early Neutering in Dogs (END) combined with Anti Rabies Vaccination (ARV) followed by control of parasitic infestation in dogs needs to be made on priority.

(3) Encourage proper disposal of kitchen waste to be disposed-off in properly covered community garbage dumping sites/ bins to reduce the possibility of dogs congregating around rubbish sites. Efforts can be made for proper garbage waste management and scientific disposal.

(4) Public adoption of Stray Dogs: Efforts needs to be made to encourage animal lovers to adopt the stray dogs.

Dogs are sentient creatures and they can be fed without causing any inconvenience to the public and without causing environmental pollution. Stray dog should however be fed in identified places away from public parks, educational institutions, hospitals, etc. Successful collaboration between animal health, human health and environmental sectors is imperative.

Every animal has been created for a purpose. It is a duty upon every human being to respect Almighty’s creation. If we ill treat any of His creation, we will be questioned about it on the Day of Judgment