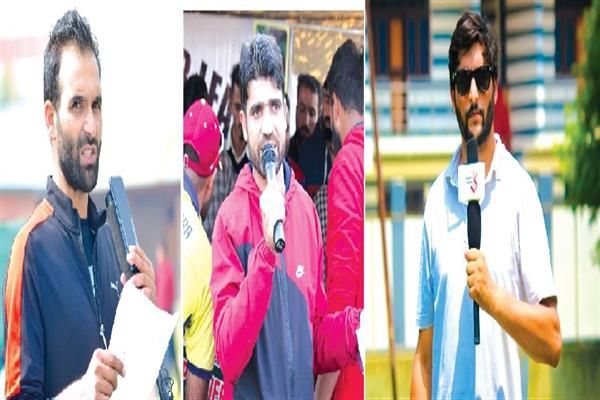 As sports lovers are keeping track of the ongoing T20 cricket world cup in the United Arab Emirates (UAE), Kashmir-based commentators are keeping the pot boiling with their unique style of narrating actions on social media platforms. They not only keep youth engaged but it seems they are setting a new trend in sports in the Himalayan region.

Over the past several years, there have been a massive growth of new media platforms; Valley’s sports fraternity started using social media as a tool to promote sports culture. While Facebook sports pages are trending globally providing minute-to-minute updates, sharing videos of various events, the case in the valley is not different.

In Kashmir, some of the sports commentators are amusing listeners on social media platforms.

Irshad Ahmad Payer, an english commentator, is one such name who is a known voice for his commentary skills and has become famous among Facebook viewers particularly cricket lovers in the valley.

Payer is being listened to and appreciated on Facebook across Jammu and Kashmir for his cricket commentary skills which have attracted thousands of youths to the game.

“I started commentating in local matches when I was studying in 10th standard,” he said.

Hailing from Dardasun Kralpora area of district Kupwara, Payer has done his schooling from a local school, pursued his graduation in botany from Ambedkar University Agra and is currently working as a government teacher.

“As cricket is the most liked game in India, particularly J&K, I used to play a lot of cricket since my childhood, and later developed an inclination towards commentary owing to lack of TV set at home,” 33-year-old Payer told Rising Kashmir.

Inspired by famous commentators like Prakash Wakankar and Milind Wagle and later on when TV was introduced he became a diehard fan of Mark Nicholas. Apart from him he also follows TV commentators including Micheal Slater, Kevin Peterson, Adam Gilchrist and Harsha Bogle .

The turning point which made him a popular figure among game lovers is after he joined JKSportstime (Facebook Page) as a commentator in November 2020.

“On November 20, I got a call from my friend Bhat Musa, who is the chief admin of Cricket Ramhall page, he told me about a final match of “Angels Trophy” which at that time was going on at Kulangam and I obliged to accompany him to Kulangam where we met the chief admin of JKSportstime, Mushtaq War and my fellow commentator Nasir Dar who was also commentating at that time,” he said.

As Payer was allowed to commentate in the second innings of the match it was then when his way of analyzing impressed the crew of JK sportstime and he got inducted in that crew as an official commentator of JK Sportstime.

Despite many challenges, Payer kept his passion alive and worked on his dream to become a famous commentator of the valley.

He said that being a government teacher he could cover only those matches which are scheduled on holidays as he has to attend school as well.

Their efforts of Jksportstime are being hailed by about 3.5 lakh followers of and at times around 8 thousand people watch them live and enjoy live streaming.

“Streaming matches live on JKsportstime has helped cricket to grow by leaps and bounds and a lot of hidden talent came to the fore due to this effort. Besides this, cricket has reached to far off places in valley like Karnah owing to our efforts on JKSportstime,” he claims.

Another cricket commentating gem is 28-year-old Nasir Ahmad Dar, who commentates in Urdu and Hindi, was applauded by Indian commentator Millend Wagle for his commentating skill.

Dar hails from Bonichakal Baliharan, Pattan – the far-flung hamlet of north Kashmir’s Baramulla district. He has pursued Masters in political science followed by Masters in Tourism and Travel Management. He also has pursued his diploma in landscaping and Gardening from SKUAST.

Dar started his commentary journey way back in 2007-08 in native ground in Sir Syed Memorial cricket Tournament. For the past several years Dar has been commentating almost in every nook and corner of the valley.

“I am commentating from Bijbehara ground of Anantnag to Galizo ground of Kupwara and have visited more than 100 grounds, and am currently Commentator of JKSportstime which I believe is Lifeline of the valley, when we talk about sports,” he said.

Dar got inspiration for commentating from the hindi cricket commentator (AIR) Vineet Garg.

“The comments they pass acts as a tonic to boost our confidence and morale, the commentary has added new charm and has given a new shape to cricket in the valley,” he said.

He said, “In case if I find difficulty in pronouncing certain words, I listen to Vineet Garg and even Sanjay Banerjee to understand the correct pronounciation.”

Dar says that JKSportstime helped in bringing the local talent in front of the selectors.

Para started cricket commentary in 2005 when he was 16. He Pursued Masters in Psychology from VishwaVidyalaya University Bhopal, and also did B.Ed from Alhuda College of education. He also qualified Masters in Education from Kashmir University.

While pursuing the M. Ed he qualified for the interview of Counselor (National Health Mission) and was appointed at “Trauma Hospital” Pattan where for the past six years he is delivering his services.

“I started my commentary in 2005 at Shabir Nisar Wahid (SNW) ground for the event and until now I have been part of each and every tournament from South to North in every district,” he said.

Para claims that he is the lone commentator of Jammu and Kashmir who hosted matches at Synthetic Turf TRC Srinagar for Mufti Mohammad Syed Trophy.

“At present, I am serving as a commentator for Jammu and Kashmir Football Association (JKFA) for Khyber Premier league,” he said.

“I have done commentary at different pages on social media like, Kashmir sports watch, Jammu and Kashmir Sports page, JKSportstime, ANN news on cable network and others.”

Para said it has been his childhood dream to become a commentator but has faced many challenges.

“When I started commentating people initially criticized me, at times I was told that I am wasting my time, but I never heed to them and moved on, and continued to chase my passion.”

“I always believed in my talent and tried to execute it. I always anticipated critics positively and believed in learning which helped me a lot so far,” he said.

Para said, “it was tough to travel from my home to far-away grounds like Anantnag, Budgam, Bandipora, Srinagar etc. but he always reported the ground on time.”

“I am the first English commentator who has done live coverage on Facebook,” claims Para.

Despite criticism, many people stood by his side, particularly his brother and sister who would listen to his commentary.

“One of the great players and active DySP ACB, Mohammad Rafi Paray always identified my mistakes and rectified and boosted my confidence. He has been a mentor to me. My friends always encouraged me besides, Shaheen Sports Association Chanderhama has always backed me,” he said.

He says that it has been his dream to become a national commentator and represent Jammu and Kashmir there.

“My dream is to be part of the Indian Premier League (cricket) and Indian Super League (football),” he said.