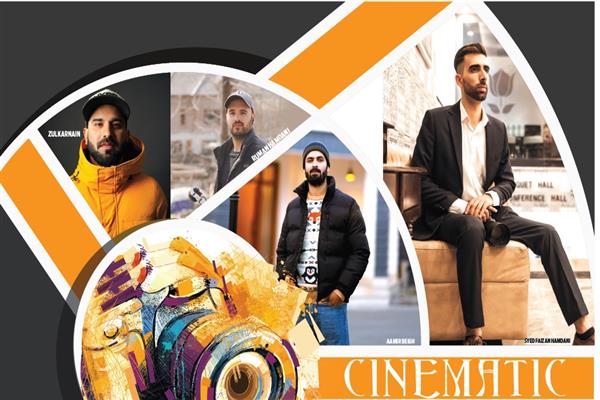 Wedding photography has been practiced in Kashmir for a long time but the cinematic touch has given it a new outlook, attracting many couples to opt for cinematic wedding photo shoots.

In this rising trend, a number of photographers are pursuing their career in this field. Rising Kashmir’s feature writer Saba khan spoke to some of the photographers to understand the idea of wedding story telling in Kashmir.

One of the cinematic wedding photographers, Syed Faizan Hamdani is currently running Film Craft by HF where they provide photography and film making services for weddings, pre/post weddings, and lifestyle & fashion.

Besides this, he also runs Cinepsyc.in which is a line production organization and deals with films, commercials, music videos, etc.

Faizan, who has pursued his Journalism and Mass Communication in Dehradun, had fascination of taking pictures of people and things since the childhood.

“In 2017, I came to Srinagar before my last semester when a friend asked me if I could shoot a wedding of his cousins as he had seen my photography work on social media,” he said adding, “It was not the easiest, but to be honest it was fun. It was just me with an APS-C DSLR and a shifting aperture lens which is not much but I somehow got the job done.”

Later Faizan, got lots of appreciation for the same, that's when he thought shooting weddings can be a full-time walk of life. .

“I cannot recall the exact count, it'll be approximately 75 plus weddings that I've shot across India which includes my personal shoots as well as working as a freelancer,” he said, adding “I have also shot for various brands like Lakme, Picberry and Wedmegood.”

Apart from weddings, I personally shoot fashion and portraiture as that's my go to style in photography, I also do cinematography and direction on commercial projects i.e. films and music videos, etc, Faizan adds.

Sharing the details of the wedding package, he said we start at ?75,000 and in this package we cover almost everything a Kashmiri wedding requires, add-ons and changes can be made as per client's specific requirements which may sometimes incur extra charge.

“There's also a package called "Fine-Art" which starts at ?1,5,000. As the name suggests, each and everything in this package is premium, let it be gear or deliverables,” he said.

They also have an option in which all packages can be customized as per client's specific requirements.

After weddings customers receive the images within 15 working days, which includes all the edited photos, video and a customised photo-book app for Android/IOS which the client can share with their loved ones until their printed photo-book gets delivered.

Faizan says, “The key to connect to your audience is basically your behaviour i.e how you speak to people while you're on a shoot or on social media, your appearance and language also play a vital role.”

Another Kashmir based photographer Aamir Beigh is also into cinematic wedding photography. He runs his online pages ‘Kashmir wedding by Aamir Beigh’ and ‘Kashmir in my lens’.

“In 2016 my friend invited me to take photographs in his sister's weddings. They liked my photographs and the bride gave me 2000 rupees and at that time,” he said.

Later, Aamir started posting his pictures on social media and people started acknowledging his work and that gave him confidence to carry on with wedding photo shoots.

With time, Aamir was able to build his own team of 12  photographers and cinematographers in the valley.

“A big happy family of 100k plus followers on Instagram and Facebook motivates me to carry on in this profession,” he said, adding we offer service to the client according to his/her requirements.

“I have been shooting weddings for the past 6 years and have covered almost 200 plus events. However, we believe in quality rather than quantity therefore we take limited projects at a time,” Aamir said.

Aamir has been sharing his work online since the very day he started his profession. While talking about the challenges faced in this profession, Aamir said, the list is long and it keeps getting interesting.

“Photography is a skill which needs constant up gradation, in terms of new machines, technology and also aesthetics but I really enjoy this process of upgrading myself and the team. Initially, I felt that in our Valley, there is limited scope for photography career, but fortunately, I have found a lot of acceptance and love,” he said.

Another Kashmir based photographer and a filmmaker, Ruman Hamdani is currently running a photo and video production company called Master Visuals Studio through which they produce TV commercials, music videos, short films, corporate videos and also have a cinematic wedding photography division.

He runs the company with his partner, Zulkarnain Dev who is also a photographer and filmmaker. “Our main focus was on film making but in 2016 we also established our weddings photography division. In the wedding shoot we were one of the first few photographers who started cinematic wedding shoots in Kashmir in 2017,” Ruman said.

He said, “In Kashmir, you never know what will happen next but weddings go on in every situation.”

Besides this, we do TV commercials, and make videos for local business and artists. We have done music videos for singers like Yawar Abdal and Mohammad Muneem.

We have worked everywhere in Kashmir and we provide realistic work.

“We work in a way that we capture the essence of our client's big day and document our traditions in an authentic and cinematic way.”