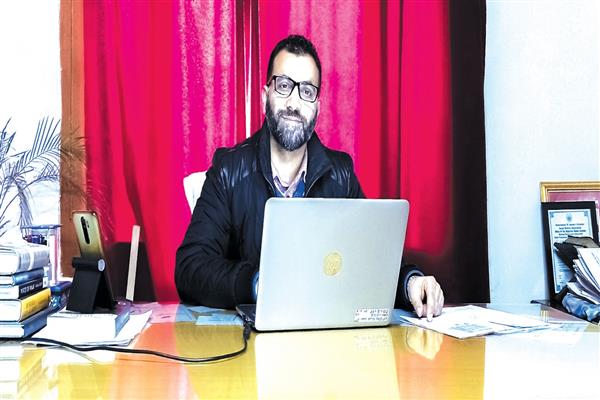 Founded in the year 2000, ChotayTaray Foundation, a not-for-profits school for specially-abled children have rehabilitated nearly 8000 children who were suffering from various illnesses such as delayed development, hearing disability, visual impairment, down’s syndrome, autism, and seizure disorders.

Located in Srinagar’s Baghat area, the school has emerged as an extensive Child Resource Centre, catering noble services such as special care education, rehabilitation, cognitive development regimens, and vocational training to specially-abled children from families with all sorts of backgrounds.

The teachers, trainers, and doctors at the school are all equipped with all sorts of technical knowledge and education to deal with special children. Their collective efforts help the special children develop a semblance to normal life.

Rukaya Khan, a teacher working at the school for the past eight years has a B. ED degree and a post-graduate diploma in Rehabilitation Psychology. She says that at the school they provide boarding shelter, night care, physiotherapy, vocational training, counselling, and various other services to the special children. Additionally, parents are also counselled to help the children achieve their developmental goals.  She says that for a special child to grow, the parents need to accept their children as they are.

Rukaya says that sometimes they receive children who have surpassed the cream age of development and at that time the teachers are largely out of sorts to help them.

At the school, the teachers have predefined goals that determine the development of a child. The teachers regularly assess the child’s IQ and decide whether the child needs any further help. Although the education imparted to the children at the school is different in both curriculum and style, none of the children that attend the school is enrolled at normal schools. Of course, this is something that is viewed as ‘problematic’ by the teachers.

While expressing their happiness about the result of their efforts, the teachers say that though they always see the special children progressing, it takes considerable patience and time on their part.

“Change comes in children but it takes time. Unfortunately, the family involvement Is lacking and, in the cases, where the parents are actively participating with us, the children progress quickly,” Rukaya says.

To help the children live beyond parental support, the school provides the children with special vocational training as well. The school authorities say that the special children are often either not eligible or not able to get white-collar jobs in the work industry. Therefore, the vocational training would help them earn their bread and butter once they lose parental support.

“The sort of children that are enrolled in the school are almost all the time-dependent on their parents, so our motive is to make the children independent as well while focusing on their all-round development,” adds Morifat Saba, a vocational trainer at the ChotayTaray school.

Morifat has twelve children enrolled in her class and she teaches them candle making, Jute-bag making, and decorative item making. Mostly, the items that the children make during her class are put up for sale to help the school gain some earnings. All the services provided to the children are given free of cost.

According to Morifat, vocational training aids the children in their speedy cognitive development.

“It takes time to teach these children but it's not like they don’t learn,” Morifat continues. “Parents or guardians usually don’t give much attention to their learning. When I was brought in here, I was afraid; very afraid, but with time I got attached to these children and learned the tricks to make them work on their developmental goals.”

Morifat says that it gives her great pleasure to see the children eat on their own, go to the washroom, or say, do decorative art. She says that though it may seem that it’s a great deal but for them, it’s a great achievement.

Morifat has a degree in art and craft and each student enrolled in the school receives a 3-month training from her. If the child fails to complete the goals, he is put through the 3-month term again and helped in completing them in that period. However, some special children have been visiting the school for years and the teachers are consistently working on their development.

Aiman Manzoor, 19, has been bringing her brother Arbaz Ahmad for the past four years to the school. Every day, they make a journey from Srinagar’s Habbakadal area, which is nearly six Kilometers away from the school and spend their day at ChotayTaray. While Arbaz takes his lessons, Aiman waits in the hall and sometimes answers and fills the feedback forms on Arbaz’s recovery who is suffering from Cerebral Palsy.

Similarly, Gurmeet Kour, another parent has been bringing her son Karan to the school for the last two years. However, she is upset about the fact that lots of in-person class time were lost due to the Covid-19. Though the school offered home classes at the onset of the pandemic, they were discontinued due to parents expressing concern over the spread of the virus. Ultimately, the school shifted to online classes during the early pandemic and is currently offering in-person classes to only a few students.

“Regular classes would have made him improve greatly during the past two years. We have seen both walking and speech improvement. Doctors have diagnosed him with developmental delay and I am hopeful that he would get better with each passing day. I suggest each parent who has a special child at home send out their children. As parents, we fear that our children may get bullied outside, but such children should not be isolated; they can improve when we can put them out into society,” Gurmeet Kour added.

While speaking with Rising Kashmir on the genesis of ChotayTaray, the founder of the foundation MrArjumandMakhdoomi said that the institute was established in the year 2000 with a noble intention to rehabilitate the special children of the valley. “In 1999, I met a Dutch lady who told me that here your special children are begging on the streets while we have a special school for them in the Netherlands. This made me think that perhaps we were failing our children and started this School.”

“It has been a beautiful journey thus far. I feel that I have done at least my bit for society,” Arjumand adds. “We have rehabilitated nearly 800 children and we have also reunited 54 children with their parents in U.P. Bihar and Jharkhand and prevented them from getting further in the child labour and begging market. We have also employed hundreds of youths.”

Arjumand says that organizations such as his should mushroom everywhere and they should have public backing. His foundation is functioning out of donations and crowdfunding. It’s the generous donations that make it possible for him to provide all the services free of cost, including stationery, books, aids, appliances, and food for boarding students.

“Rather than pitying the special children, we should attempt to make their lives easier in whatever way we can,” Arjumand adds in a message to the society.

With social support to the special children in shambles and lack of awareness about the developmental issues in the children, Arjumand’s school appears to be running a social crusade. Of course, he hopes that his zeal would inspire others as well and they would start similar endeavours of their own in Kashmir valley where lots of work is yet to be done in the arena of child development.