The people who have worked in the cheese business for the last four decades have never adulterated this locally made cheese, which led the village to earn the name Chaman Chogal. 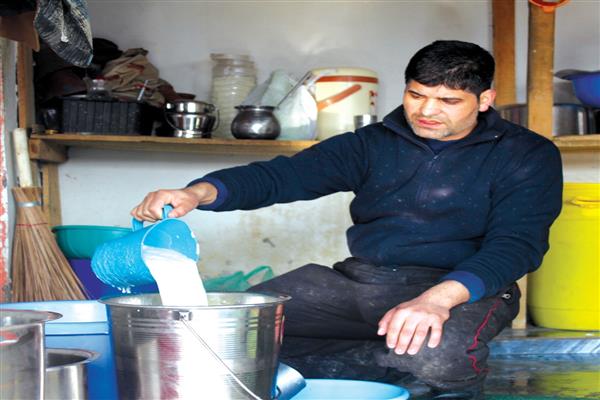 If you happen to visit Chogal area in this north Kashmir’s Kupwara district, don't forget to bring home some finest cheese made in this village. The cheese being made in this village is famous across Kashmir and is also being sold at the international level.

Senior citizens of the village told Rising Kashmir that the people who have worked in the cheese business for the last four decades have never adulterated this locally made cheese, which led the village to earn the name Chaman Chogal (Cheese Chogal).

The majority of locals living in the area are associated with the cheese-making trade. "The Kupwara district has largest dairy farms and every household owns one or two cows which produce a large quantity of milk here", the locals said.

Chogal has not only made the Kupwara areas self-sufficient in milk and cheese but it has also built up the capacity to supply the surplus to Srinagar and other districts in Kashmir.

Situated at Kupwara - Sopore road, the Chogal village is just three kilometers away from Handwara town. "Over the years, Chogal cheese vendors have honed their skills in the preparation of high-quality cheese. The majority of individuals choose to sell their milk here since they can get better prices for it, which is subsequently turned into cheese and other dairy products."

According to the cheese vendors, this pure cheese has provided employment chances to residents of nearby villages such as Guloora, Gund Chowgal, Kultoora, Takiabal, and Kulangam, which are being gathered by some Chogal cheese dealers. Residents claim that daily, people in this area sell cheese and milk for roughly Rs 4 lakh.

Reyaz Ahmad, a cheese seller, told Rising Kashmir that his family has been in this trade since 1985, and he has been selling cheese since then. He sells 70-80 kg of cheese every day, in addition to selling milk to people.

Ahmad further said that key leaders in the valley, like Farooq Abdullah and others, are ordering relish cheese from his shop, and that people from Teetwal to Banihal are coming to buy it.

“We collect milk from all adjacent villages, and made cheese out of it. For this cheese we receive orders from various parts of world including Dubai. We send it to various countries whenever we receive orders. I shipped 70 kg of cheese to Dubai recently,” he said, adding “the Kashmiris living or working in Dubai prefer cheese from Chogal.”

Abdul Gaffar, another cheese vendor, said he is one of the oldest people selling cheeses in Chogal. “Those who buy cheese here for the first time have become regular clients, and people from Srinagar and other areas of Kashmir valley come here solely to buy cheese,” he said.

“A person from Srinagar is coming here exclusively to buy cheese, even though the cheese is widely accessible at every market, the quality and flavor is the only reason people prefer to travel here to buy the cheese from this village."

The only reason why cheese made in this area in gaining popularity, cheesemakers say, is they have never done adulteration in cheese making. They hope that the legacy of unadulterated cheese making continues.

The milk in the village is being also sold at Rs 30 per kg but in other parts of valley, the same milk is being sold at higher rates.

Another cheese seller of the village, Farooq Ahmad said that he is making daily cheese of around 600 liters of milk while as in Summers he collects around 1500-1800 liters of milk from people for cheese making.

He is happy with this business. He says, a large number of people in this area are associated with his shop and he has become the source of their livelihood.

“It is almighty Allah who is providing livelihood to these people and he chooses me for the same, it gives me immense pleasure to be a source of the livelihoods for many underprivileged people,”  Ahmad said.

The young cheese seller said, he has some clients who are solely dependent on milk selling and they are fulfilling their daily needs by selling milk.

Talking to Rising Kashmir, Ashiq Ahmad, a resident of Chogal, said, “my son is studying in Bangladesh and he always requests for the cheese made in this village to be delivered to him. We are regularly sending him cheese.”

The residents of the village want a manufacturing unit in the village so that various milk-made products can be manufactured there. They believe if the government is willing to setup units, they should pay attention to making these small units that will provide job opportunities to the  people in the area.

They said the village is located on the main road and if there would be some mini-factories that would be a boost for the residents of this area and they hoped that the government will think over it in future.

A young cheese seller on the Sopore- Baramulla road told Rising Kashmir that many young educated people have chosen this as a profession because it is not possible that every individual can get a government job.

He stated he is associated with the shop for the last many years and from the last one year he is operating it on his own. “I am happy that i am earning handsomely and am not dependent on anyone,” he said.

Speaking to Rising Kashmir, Chief Animal Husbandry Officer Kupwara Dr. Shabir said, the area has a vast livestock which includes the crossbreed population. This particular area has a good conversion ratio as compared to other areas of the frontier district.

“People in the belt have easy access to nearby veterinary centers which is helping them to grow more livestock,” he said adding “the breeding programs in the area have achieved the feat.”

Dr. Shabir said that this belt has surplus milk available and every household’s requirement is fulfilled, the remaining milk is being used for different purposes, including making cheese curd and other daily products.

It all begins with milk collection from dairy farms and households. When the milk arrives at the cheese shop, the cheesemakers inspect it and take samples to ensure that it meets quality and purity standards.

Mostly cheese is made with cow milk which offers optimal amounts of fat and protein. Some examples of cow’s milk cheese include cheddar, Swiss, and Gouda, among many others.

After passing through a filter, the milk is standardized, which means it may be supplemented with more fat, cream, or protein. This is significant because, to generate a consistent cheese, cheesemakers must start with the same base milk.

Pasteurization occurs after the milk has been standardized. Pasteurization is required because raw milk might contain harmful bacteria, which are killed by pasteurization.

Because milk is the star of the show, you'll need perfect milk to make perfect cheese. Because "just right" varies from cheese to cheese, many cheesemakers begin by standardizing their milk by processing it any way they need to. This could entail adjusting the protein-to-fat ratio.

Cheesemakers acidify milk by adding starter and non-starter cultures. The milk should already be around 90°F at this time, and it should be kept at that temperature for about 30 minutes as it ripens. The pH level of the milk drops throughout this ripening process, and the flavor of the cheese begins to develop.