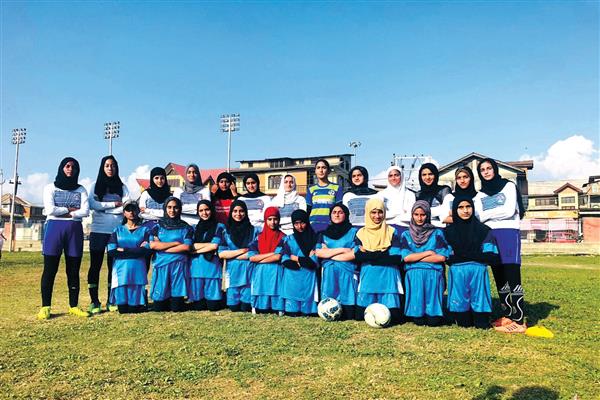 Football in Kashmir is gaining momentum and female footballers are no less than their male counterparts. While breaking down the old taboos, young girls are aiming high and giving their blood and sweat to the game.

Nadiya Nighat, first women football coach of the valley, runs her own football academy JJ7 and is presently in Kerala league. In 2015, she started the academy by training boys. After one year in 2016, her team was runner up in the Khelo Kashmir sports event.

Watching the surge in the female students, she opened her academy for girls in 2018. In between she had to stop due to the pandemic but then she restarted again.

“I got a mixed group of U14, U15 and senior girls. When I restarted I had only 9 girls, presently I have 28 girls. All are new faces who come to get trained from far off places. In addition to family support, they need other support as well so that they can move further in the game,” she said.

Talking about the National tournaments, she said national tournaments are very important. “Some people don’t understand the value of national tournaments. Some people use the certificate for achieving jobs. Girls who used to play and work hard would not get selected into nationals. I decided that we would go for fair selection even if our team was weak. We will get players from Haryana as a backbone and we gave a good performance. We will develop a lot only if we play a fair game,” she said.

Adah Bhat, 16, started her journey when she was 12 years old from her school. She got inspired from her elder brother who also plays football. Gradually her interest developed and she started giving her full time to the game. For Real Kashmir Football Club, she is currently playing as goalkeeper which she thinks is the most difficult position to be. “A goal keeper has to play under stress and pressure because it’s okay if the striker misses the ball but if a goalkeeper misses a ball you can lose the game. A goal keeper has to be attentive all the time,” she said.

The reason she chose to be the goalkeeper is because she used to play throw-ball earlier in her school days. Having good grip over the ball became an advantage to her. Later on, with much practice, she got hold of her footwork too.

“I believe practice makes a man perfect. We practice every day for two to three hours. I have a separate coach which is a good thing for me. Diving, footwork and handgrip are some of the techniques that I have to master,” she said.

The most difficult position for a goalkeeper is one on one situations with the player of an opposite team. “The chances are more that the opposite player can make a goal but a goal keeper has to dive between the legs of the striker and get the ball. Then you have to throw the ball to your team beyond the centerline,” she said.

Her future plans are to play in the senior national team. She believes she will perform well and make her place in the India women football team. She has played three nationals and has missed some due to her injuries.

Braving her injuries, she said, “Sometimes my family tells me to leave the game but they have been supportive to me as well. I didn’t start football just to leave it because of injuries and scars. My injuries make me love the game more. They are just part of it.”

Another 16 years old player, Mahruk has played 6 nationals. She has been a captain in 5 nationals. She said, for the first time, during her captaincy in the Under 14 team, they won a match against Kerala in Orissa.

“For me discipline and consistency is the key. I have kept time for everything. I study in the morning, then I go for practice and then again I give time to my studies. It’s important for sportspeople to juggle many things,” she said,

Recalling her early days when she was actually a Wushu player, she said, “My coach demotivated me and said that I cannot play football. I took this very personally and put my sweat and blood into learning the game. I knew that I would be one of the good players. Later on, the same coach told me that you are my player now.”

Considering motivation an important thing for a person to keep going, she said, “The inner voice that you get within and with the determination you can cross any hurdle,” she said.

She wants to continue playing football and play for big clubs like Mumbai FC and Bangalore FC. “Their teams are being made so I will give trials and maybe I will be selected,” she added.

For a young player, Zaara Riaz the Real Kashmir Football Club was the ray of hope that there is still much for her in football. “It was going well till 2020 then due to Covid outbreak everything stopped but Real Kashmir FC provided us with a platform. They are training us for years with proper infrastructure. Our coach has trained us properly. I have a dream that I want to play for the India football national team,” she said.

Be it winters or unfavorable conditions, her practice sessions don't stop now. In 2017, in the state championship, she was the youngest player selected for the team. In 2019, while playing under 19 tournaments of Khelo India in Tripura, she was recognized as the best player of the tournament in Jammu and Kashmir.

She said, “We have even played with the under 15 boys team of Real Kashmir and we defeated them. This really boosts us.”

Managing between studies and sports, she said it has been difficult for her. “I have been studying on my own because I don’t want my training to suffer and want to balance my studies with the training sessions. I prepared for NEET on my own without anybody’s help,” she said.

She said, “When we get released from the clubs we don’t get any further chances. Government should do something so that we can play further as well. Since Covid 19 outbreak no tournaments have been held in the past two years.”

The football clubs of Kashmir have been giving a platform to girl footballers to explore the sports. With the intention to encourage girls of Kashmir for football, Real Kashmir Football Club had started an initiative called, She Power in 2020.

Umar Amin, one of the representatives of the Real Kashmir Football Club said that the initiative was to empower the women footballers from grassroot level and to find new talent which was being underestimated for long.

He said, “We were the first to include the girls in the football club as we feel they should get equal opportunity as boys get and the uplifting of girls happens when they are uplifted in sports. The initiative has boosted many girls to choose football.”

He said, “Our players have created history in the field of football. Children have talent and we are ready to train them. We want our players to participate in national teams as well.”

This year, nine girl players from the Real Kashmir Football Club were selected for senior nationals and for school nationals, seven were selected. Currently, till Under 18, there are 26 girls associated with the club.

Downtown Heroes Football Club has also made a female football team and are ready to kickstart the matches. Mushtaq Bashir, co-founder of the club said, “It was very difficult for us to get the female players while scouting. We have identified the young players to train them. Our team involves all the female players from Kashmir and is being currently trained. People don’t allow girls to go in football but we are trying our best to break the stereotypes.”

Nuzhat Gul, Secretary, Jammu and Kashmir Sports Council said the association has a mandate to develop any game.

“For football academies, we provide coaching camps. For training, events and for the upliftment of the game we help them financially.  Also, football coaches of different districts train students. Men as well as women footballers train those who want to learn football. Under Khelo India, we have football academies in which community coaches train kids. Sports academy under the name of State Football Academy provides free training and equipment. We catch them young and train them,” she said.

Also, the support is being provided to the clubs who are affiliated with Jammu and Kashmir Football Association and State Football Academy.

She further said that there are women footballers who are coaching kids in other districts like Budgam, Ganderbal and other places.

“In coming days, we are starting the Women Football League by National and International Footballers (NIF). We support all the initiatives of those who are supporting any game, especially women oriented. At a greater level, we are starting academies in Jammu region and Kashmir region by dividing into five zones,” she said.

She further said that there is a tremendous talent of sports among women and not only football, women play all sorts of sports.