Char chinar island in the middle of the second portion of the Dal lake has been a favorite place of emperors and empresses and later it attracted famous foreign writers/visitors like Bernier, Forster, Moorcroft, Vigne, and many other travelers 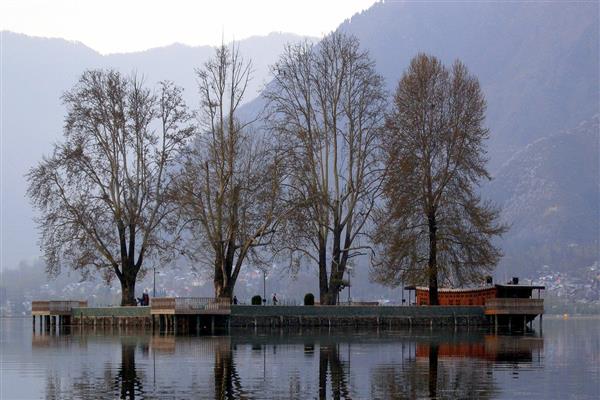 For Farooq, the main aim of watching old songs is to see the past beauty of Kashmir valley especially the Dal Lake, Char Chinari, Gulmarg & Pahalgam as he spent most of his free time to watch them again and again with the latest mobile smart phones and 4G technologies. The main attraction of the Bollywood stars in 1970, 80 and 90s was the Dal Lake and few songs were recorded at both Char Chinari (islands) located on two different sides of Dal Lake and reaching to islands is only the water transport like ‘Shikara’ or boats to enjoy the natural cool breezes there.

Dal is a lake in Srinagar (Dal Lake is a misnomer as Dal in Kashmiri means lake), the summer capital of Jammu and Kashmir. The urban lake is integral to tourism and recreation in Kashmir and is named the “Jewel in the crown of Kashmir” or “Srinagar’s Jewel”. The lake is also an important source for commercial operations in fishing and water plant harvesting. The shore line of the lake, is about 15.5 kilometres (9.6 mi), is encompassed by a boulevard lined with Mughal era gardens, parks, houseboats and hotels. Scenic views of the lake can be witnessed from the shore line Mughal gardens, such as Shalimar Bagh and Nishat Bagh built during the reign of Mughal Emperor Jahangir and from houseboats cruising along the lake in the colourful shikaras. During the winter season, the temperature sometimes reaches −11 °C (12 °F), freezing the lake.

The lake covers an area of 18 square kilometres (6.9 sq mi) and is part of a natural wetland which covers 21.1 square kilometres (8.1 sq mi), including its floating gardens. The floating gardens, known as “Raad” in Kashmiri, blossom with lotus flowers during July and August. The wetland is divided by causeways into four basins; Gagribal, Lokut Dal, Bod Dal and Nagin (although Nagin is also considered as an independent lake). Lokut-dal and Bod-dal each have an island in the centre, known as Rup Lank (or Char Chinari) and Sona Lank respectively. The houseboats are closely associated with Dal Lake which provide accommodation to tourists in Srinagar.

The famous Dal Lake of Srinagar city includes 3 islands, 2 of which are marked with beautiful Chinar trees located Bod Dal and Lokut Dal and known as Rupa Lank (Silver Island) and Sona Lanka (Gold Island). It is marked with the presence of majestic Chinar trees at the four corners, thus known as Char-Chinari (Four Chinars). The Char Chinari Island gardens came into limelight in 1970 with the movie song of Achha To Hum Chalte Hain of Aan Milo Sajna movie of 1970 filmed on Rajesh Khanna and Asha Parekh.

The Char Chinar used to be a haut of tourists for its serenity and the aesthetics as four gigantic chinars stood on the four corners of the small island amid the vastness of the pristine lake. Murad Baksh, brother of the Mughal emperor Aurangzeb, constructed the Rupa Lank. The second Chinar Island, known as Sona Lanka (Gold Island), is located on the Lokut Dal, and overlooks the holy shrine of Hazratbal.

Sona Lank “golden isle”. At the south end in the third portion of the lake was raised by Sultan Zain-ul-Abidin in 1421 AD for the shelter of the boatmen in Bod Dal (Big Dal). He built a three-storeyed house on the island which was destroyed by the earthquake. Emperor Jahangir also built a cottage there, which also got vanished. It was rebuilt by Afghan governor Amir Khan Jawansher (1770-76). Nehru Park is an island just a few yards away from the roadside near Shankar Acharya hill.

Chinar trees characteristically grow in Eastern Himalayas. They have been an important part of Kashmiri tradition, in that, a Chinar tree is found in almost every village in Kashmir. These trees have survived for ages, because Chinar is basically a long-living tree. It spreads wide across a region of cool climate with sufficient water. The tree has several properties - leaves and bark are used as medicine, the wood, known as lace wood has been used for delicate furniture and the twigs and roots are used for making dyes. Chinar Leaf is a symbol of Kashmir. Chinar leaf is very beautiful which is green in summer season and in Autumn the color changes to Blood Red, Amber, and Yellow.

The word “Chinar” is originated from a Persian word which means “what a fire”, the reason is in Autumn season, the red radiant leaves of chinar tree makes it appear as the tree has got fire. The chinar leaf looks like same as Mapple tree leaves. Chinar trees can be found almost in every corner of valley, hills, planes, cities, villages and parks. Due to these reasons, they are widely preferred in gardens. They even have many medicinal properties. Well if you are looking to escape the hustling and bustling of the city then this is the perfect place for you to take a break.

Char chinar island in the middle of the second portion of the Dal lake has been a favorite place of emperors and empresses and later it attracted famous foreign writers/visitors like Bernier, Forster, Moorcroft, Vigne, and many other travelers. Over the years the size of the lake has shrunk to a large extent due to environmental changes and population growth. Protection measure to save the Dal lake from further hazards has been the prime concern of the authorities and people connected with the tourism industry in particular.

During the winter season, migratory birds float in the lake making it a magnificent scene. The Dal Lake offers splendid colors and moods with every change in the weather that mesmerizes the visitors and offers the ultimate shot to a photographer. In February, 2022, Jammu and Kashmir Forest Department has successfully completed the transplanting operation of two tall Chinars at the famous Char Chinar in Dal Lake to restore its erstwhile glory and it was marked a big achievement as first-of-its-kind achievement in the country. It was done on the directions of Manoj Sinha, Lt. Governor Jammu and Kashmir. Forest Department formulated a strategy in October, 2021 in consultation with technical experts of Floriculture Department, LCMA and Scientists of SKUAST and JKFRI for restoration of ‘Ropa Lank’ in Dal Lake popularly known as Char Chinar, by transplanting tall Chinars - the State tree of Jammu & Kashmir.

The unique operation was executed on February 19, 2022 and completed on the unique date 22-02-2022 when the two Chinars were finally planted, braving rain and snow on the day. Earlier, the 2014 floods left two mighty chinars damaged, denting its iconic view from the boulevard around the lake. The island, in fact, owes its name to Chinar trees, as Char Chinari means four Chinars. The garden in between the four chinars used to be the favourite place for visitors during peak summer to get a breathing space away from the noise of the city, all the visiting tourists and locals enjoy their trips through Shikaras to reach to both the islands of Dal Lake.

(The author is a writer and travel enthusiast. He can be mailed at m.hanief@gmail.com)