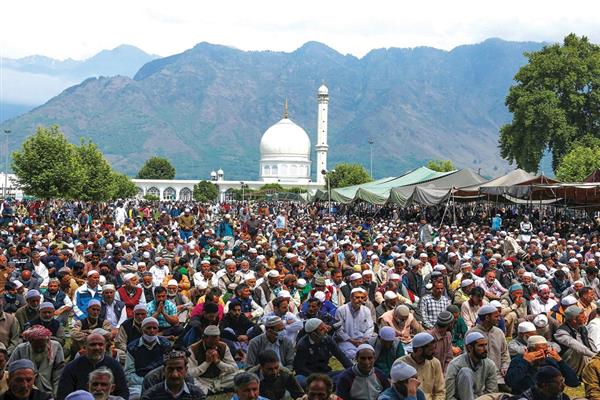 Eid-ul-Fitr is celebrated after a month-long fasting of Ramadan. The day is marked with the early morning congregational Eid prayers, wearing new clothes and exchanging greetings to dear ones. Over the years, with new trends coming up, the way of celebrating Eid has changed. The locals reminisce about the old traditions and recount the happy Eid moments of their life.

Zareef Ahmad Zareef, a noted poet and historian said that almost 75 years ago, when Kashmir was all green and pollution free, people used to wait for Eid to come to celebrate as per their resources and income.

“The day was indeed enjoyed and celebrated by all. For people, it was about happiness and thanksgiving to God. Women and young girls would welcome Eid by performing Rauf,” he said.

He said that Rauf has performed since the beginning of Ramdan. Religious songs were sung by women which included hymns and praises to God. While men would go to pray Tarawee (night prayers), women would also pray at home in tune with the mosque.

“During the night of Arfat- a day before Eid, people would wait for the sighting of the moon. Middle class people would wear the washed clothes whereas rich people would wear new clothes. In the morning, milk kehwa was served and people used to go EidGah for prayers. The elders would donate money to poor people. Elites used to take care of the people and get essentials for them during Eid,” he said.

Eidi or a gift during Eid given by older relatives was saved by children to purchase essential things.

“This money was spent to buy things. It was the celebration of love, happiness and warmth where no one was left out. Our Eid had ethnic and cultural touch but we have forgotten it today. The discipline, warm heartedness that we have lost has to be brought back in ourselves,” he added.

Zaiba Begum, a local in her late 50s recalled her childhood moments of Eid. Getting dressed in colorful clothes and shining ornaments, she along with her friends would gather in an open space to perform Rauf- the traditional dance performed during celebrations and occasions.

“Eid was welcomed with singing and performing Rauf. The twinkling of the colorful bangles still reverberates in my ears which me and my friends would wear and show each other on Eid day,” she added.

Adbul Gafar, a local of downtown Srinagar said early morning people from all walks of life would go to shrines, mosques and Eidgah (prayer ground) to offer Eid prayers as a thanksgiving for the month-long fasting.

“We used to go Eidgah with the elders. We were told to wake up early in the morning and have bath. My father used to tell me that Ramzan is a month of doing hardwork and labor and on Eid the blessings are being paid to us,” he said.

On the way back home, at various places, fairs or gatherings were witnessed. “The non-local would come from different parts of the country and set up their stall of candies, toys and offer swing rides to the children. The charges for the ride was 10-20 paisa. Those Melas were an attraction for every kid,” he said.

He further said that one of the biggest fairs used to take place in the Khanqah area of downtown.

“The 1 rupee that we used to get as Eidi, we used to spend on those amusements. The fairs and melas would last till days and it was a merry time for all of us. In the evening hours, we used to go on shikara rides from Maisuma to Shergarh,” he said.

Salma from Narbal, Budgam said that her village had a tradition of sharing dishes with the neighbors. “We would share every dish with our neighbors and this was an important custom as the status of neighbor is considered higher than relatives,” she said.

For the occasion of Eid, her mother would always buy new utensils and crockery for her kitchen and presenting dishes in those utensils was her biggest cheerfulness.

She further said that the dishes were prepared at home. “Earlier, people from royal families would get professional cooks to prepare dishes for them. The rich people would go to various picnic spots and take cooks along with them but today most of the people prefer to get ready made dishes from the market,” she added.

After lunch, all the kids of her village would go to open spaces and play a number of games like playing with marbles and stones. The relatives would also visit each other and exchange greetings.

“Unlike today where kids are glued to mobile phones and usually feel bored, we used to enjoy our Eid with our friends and family members,” she said.

In Baramulla, the tradition of beating Dufli- Tambourine and doing Rauf, marked the beginning of Eid days.

Mohammad Qadir, a resident, said that elderly men and children would move from place to place playing tambourine in delight for the announcement of Eid. “When the moon of Eid was sighted and the announcement was done on Radio, little girls and women would gather and perform traditional dance while singing Eid Aai Ras Ras EidGarh Gasvai,” he said.

He further said that after Eid, relatives and neighbors were usually called for a feast and children were given Eidi and gifts and this used to be a warm and big gathering.

“People’s hearts have changed now with the changing trends. Presently, after Eid only relatives are called and an intimate gathering is being done,” he said

With a few days left for Eid ul Fitr, the majority of customers throng the market to buy clothes, showing a strong preference for the traditional wear during the celebration.

The men folk and boys resort to Kurta Pajama which has kept the traditional tailors busy with work these days.

Nisar Ahmad, a tailor in Srinagar said, “This is the time where most of the customers come to get their Kameez Pajama stitched. They come up with the styles and designs they see on the internet and from the month of Ramadan, our work mostly involves stitching Kurta Pajamas.”

Online marketplace are also witnessing a good rush in order to buy modest clothing. Ahtisham ul Haq, a co-founder of the online store Baraqah said the demand for Kurta Pajama has been on surge since the last 10 days of Ramdhan. “Every person wears a traditional outfit atleast on Eids. The customers are ready to travel and pick up their orders if the delivery facility is not available in their areas. We have gone out of stock before Eid this time,” he said.

He further said that as compared to last year they have received more orders. “On last Eid, due to the Covid pandemic, people were not able to purchase but this year we are seeing good demand,” he said.

For Iram Wani, a resident of Lal Bazar, applying henna on her hands is what makes Eid for her. “Dressing up and applying henna on my hands is my way of celebrating Eid. Every person celebrates it in their own way but presenting one’s best self is important. I am excited that like every Eid, I will be joining my mother for prayers at the local mosque as it has been the tradition of our family,” she said.

She believes the month of Ramadan teaches a person to be generous and thankful for the blessings. “I am thankful of the blessings Allah has bestowed me with and after every Ramadan, one should discover a new self,” she added.