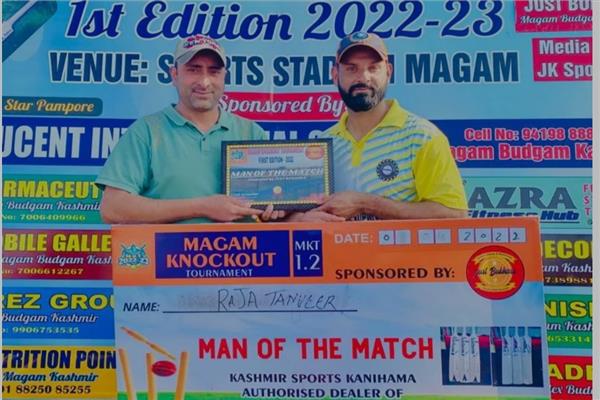 Courtesy to Raja Tanveer's brilliant century whose ton helped coaching center  Kupwara to set a massive target of 256 runs on board in the quarter final match played today.

It was a marvelous batting display by CCK's left handed batter Raja Tanveer who scored 118 runs while just facing 50 balls by hitting 11 sixes and 9 fours in his  Man of the match innings knock.

While as Irfan Rather, Nisar Hussain, and Suhail  Dar took two wickets each for Jaan XI Magam.
While chasing the target of 256 runs, Jaan XI Magam could manage to score just 166 runs on board while getting allout and hence lost the game by 89 runs.
For Jaan XI Imran Hussain and Zeeshan Ali were the top scorers who scored 50 and 35 runs respectively.

Whereas for CCK Ishfaq Robby took three wickets while Sheikh Junaid picked up two wickets for his team.

With this win coaching Center Kupwara CC have entered into semi finals. Raja Tanveer was declared player of the match for his knock of 118 runs. Pertinently, it was his second century of the tournament.