‘Wherever the art of medicine is loved, there is also a love for humanity’---Anonymous 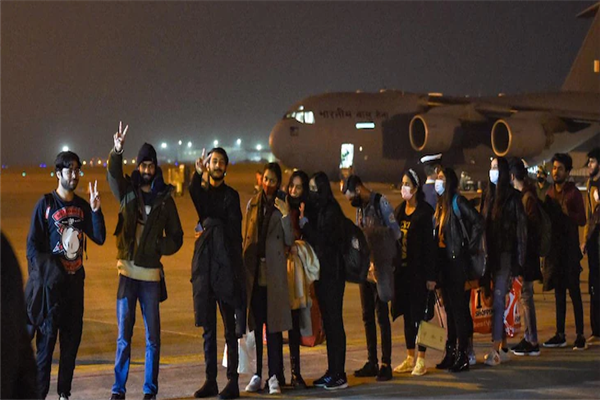 The world media including Indian media, for the past few days is witness to a macabre drama unfolding in the far west with very vivid images and a clarion call from the natives of Ukraine as well as Indian medical students huddled in the underground bunkers ,basement parks and underground metro stations for desperate help in the war torn country. Beaming across those images from their channels, shows the level of depravity which Geo-politics of countries can put to the affected nation states and innocent citizens living there. With the Russian juggernaut spewing death and destruction all around in Ukraine and no signs of abating, desperate stories of clinging on to dear life are emerging every day from ground zero.

After a 21 year old Indian medical student Naveen Shekharappa was killed in Kharkiv the eastern part of war torn Ukraine by Russian shelling a few days back, the question which is uppermost in everybody’s mind is what ails the Indian health sector/higher education system that sends packing maximum number of aspiring medical students to pursue their ambition of becoming a doctor abroad?A similar sort of situation was developed in the year 2020 in Wuhan, China when the pandemic of Corona brought international travel to a near standstill. As in Wuhan China, the maximum number of estimated 22000 plus students who find themselves in the middle of nowhere are the medical students pursuing their dreams of becoming a doctor in Ukraine. Government of India on 28th February 2022 announced that four of its ministers were to travel to the countries in the western borders of Ukraine to enhance the coordination efforts and mechanismin place to evacuate Indian nationals trapped in the war zone. Currently Indian efforts are more focused on using border crossings between Ukraine and its neighbors like Poland, Romania, Slovakia, Hungary and Moldova from where they are airlifted from these countries.

Coming to the moot point of the article is that why so many medical students from India go abroad to learn their craft, that too on populations and medical systems or conditions which are not only very divergent from their home country India but also affected by ailments which are alien to Indian sub-continent as such? This question though looking very innocuous on the face of it ,but when dug deeper has hydra-headed dimensions to it all pointing towards India’s skewed socio-political set up and its misplaced priorities right from 1947 when the country became independent from the British.This write up will primarily focus on the above mentioned scenario keeping health as its core issue. India’s federal structure has entrusted legislative powers to both the union as also to the states. In some cases, the powers are jointly shared and are placed in the concurrent list.Subjects on the union list, state list, and the concurrent list are laid down in the seventh schedule of the constitution (List I, List ii, and List iii respectively).List ii (state list-6) lays down public health and sanitation, hospitals and dispensaries as coming under the ambit of state governments. We have had two quick health catastrophes one after the other in the form of Corona pandemic waves with country’s entire health infrastructure creaking under its onslaught in the last two years with both the central and state bureaucracies not red flagging the problem well in advance . Much about the bureaucratic bungling in professional matters later in this write up.

But of all the reasons which health mandarins put forward ailing our health sector, I would zero on to just three. Firstly the legacy of depending upon the allopathic or western form of medicine and treatment, secondly decades of under investment in public health infrastructure and thirdly but the most important of all, the exclusivity of medical education being the sole preserve of the wealthy and rich by covert connivance of bureaucratic interference.India a country of 1.33 Billion plus population and ticking every second in adding new mouths to its already burgeoning numbers has a ridiculous low of 550 medical colleges with an annual intake of approximately 80,000(Eighty thousand) seats.Translated into simple mathematical ratio, about one (1) medical college per 23.63 lakhs of Indians and one doctoral seat per 16250 Indians which isan abysmally low penetrationof health sector in the country.Many medical colleges have limited facilities and the traditional model of post graduate medical education offers woefully less chances – 6000 MD/MS seats and 16000 seats via the diplomate of national board qualifications each year.

Well the above data in itself is a statement which says the fierce competition in a government sponsored medical college with many of the private medical colleges charging huge capitation fees for entry and tuition fees almost beyond the reach of an average Indian family. More over once qualified, the majority of medical graduates go for employment in corporate hospitals in major Indian cities or Metros with their chimeric vision of getting their ROI (Return on investment) as quickly as possible often throwing medical ethics to winds without realizing that their career progression has been stymied in the bargain. Obviously having loosened the purse strings of their parents for funding their professional education these medical graduates know to the demands of medical profession and try aligning to the market and life’s vicissitudes as obtaining in big cities with many of them even settling abroad. This phenomenon aggravates the already moribund health system in the vast swathes of rural India .The extremely low penetration of health sector to include the GPs( General practitioner) and physicians i.e 1.4 doctors per 1000 population in the interiors of India both allopathic and AYUSH combined has been the oft repeated norm in this sub-continent.

As if the above dismal picture is not enough to spur the government of the day to get its act together,the public spending on health sector has been around 1 % of the GDP for close to 15 years now . In 2004 the GOI, made a commitment to raise public spending on health at least to 2 to 3% of the GDP over next 5 years. That did not happen. A similar commitment was given in the year 2017 ‘National health policy” which committed to increasing the public health spending on health sector to a minimum of 2.25% of the GDP by 2025. Till now nothing much has happened on ground. Covid -19 pandemic has proved all our tall claims hollow. Compounding the matter further is the frequent tinkering of rules and regulations by the government for the undergraduate medical aspirants taking the medical entrance examinations. A lot of water has flown the rivers of India since the days of PMT (Pre medical test) conducted by the various states of our country to the present day system of NEET (National eligibility entrance test) for MBBS students in India.

One such serious malady which is afflicting and needs immediate intervention from the medical think tanks is the extremely low cut offs designedfor the NEET aspirants to make it to the grade of being ‘Qualified” and thus diluting the very cutting edge phenomenon which is the sine quo non of this profession. The low cut offs is a major cause of concern with a large number of medical aspirants qualifying for medical admissions creating thereby a huge base of qualified students which edge out or rather squeeze out the space for the high rankers with low paying capacities.Just as an example from last year NEET exams, there were around 80000(eighty thousand) MBBS seats to be filled in by the NEET-UG 2021 scores but then over 8 lakh aspirants qualified based on the 2021 NEET-UG cut off which translated to a low of 138 marks out of a total of 720 marks in the ‘General category” . This low cut off is  creating a pool of candidates with capacities to pay hefty MBBS admission fees in India even if their ranks are low while those with better grades or ranks unable to afford the same are forced to look for cheaper options in countries like Russia, China, Ukraine, Philippines etc.

Past MBBS admission trends through NEET –UG cut offs reveal how students with low ranks have ended up getting admissions in private medical colleges while those with higher rankings have been pushed out of the system being unable to afford high fees in these private medical colleges which could cost anywhere between 30 to 40 lakhs a year with the cost of NRI seats exceeding even these in some of the institutions. Actually NEET exam is a big setback for genius students aspiring for medical seats in India .For NEET, 2021 the qualifying marks were 138 out of a total of 720 which turns out to be just 19% and utterly inadequate to make you even pass class X exam of any board of school education of India. This eligibility criteria is brought down so that more students qualify and the pool of those who can afford exorbitant fees of Rs 1,25cr to 1.5 cr expands. If you were to make the eligibility criteria as 33% as is in vogue in the school boards of education for passing, I am sure most medical seats would go a begging for want of filling these seats.

Why and what is the logic of sudden bringing down of pass percentage of medical students for NEET exam who when studying in the final year of their schooling had to remain on top of the score chart clocking unprecedented percentages? In fact it should be the other way around, so that only bright and genuine students get past the portals elite medical colleges of the country. Also in the bandwagon of spreading mediocrity by default or otherwise are the medical regulators – the erstwhile MCI (Medical council of India) and now the NMC (National medical commission) for failing to stem the rot. Although the MBBS seats rose from a meager 52000 in 2014 to 80000 in 2021, the need to furtherbridge the demand – supply gap remains pressing as ever before. Realistic cut-offs will enable merit based admissions and stop the outflow of meritorious candidates to foreign shores.

My own son Kartikye Singh Lalotra despite scoring good marks in his final years of schooling and above 80 percentile in NEET had to leave for foreign shores (Philippines) to pursue his medicine studies in the year 2017/18. Further spreading the rot in medical colleges is the fact that upfront donations or the so called capitation fees are now spread over 5 years. In 2020, of the 15.4 lakh students who appeared for the said NEET exam about 8.7 lakh students qualified, with a student of 7.5 lakh rank too managing to get into a private medical college. This student got just 21% marks in the NEET exam and will be soon treating his countrymen.

The ultimate factor functioning in favour of Indian students choosing foreign shores for pursuing their dreams is the ‘Subsidized medical education’ system in the previous socialistic countries like Ukraine. Therefore affordable cost of education, living, and easy access to admission are important drivers for attracting Indian students to Chinese and Russian medical universities. At the end of the day what is happening to the young medical students in countries like Ukraine is a bolt from the blue for Modi government to set course correction in its health sector and act as a magnet for brighter students to plant their feet firmly in India only.

(The writer is a retired army officer and RK Columnist. He can be contacted on his email…slalotra4729@gmail.com)