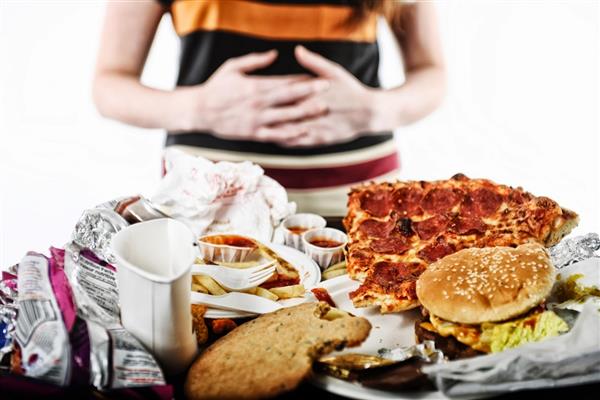 Bulimia nervosa, often just called bulimia, is a disorder that is characterized by rapid, out-of-control binge eating past the point of fullness or comfort, followed by purging either by self-induced vomiting done manually or sometimes with ipecac syrup, by taking laxatives, or by using diuretics.

To fit the diagnosis, these cycles of binging and purging must repeat consistently at least once a week for a period of 3 months, but can happen as often as multiple times per day.

The onset of bulimia typically happens around adolescence, usually in individuals with low self-esteem who have a strong desire to have control over key aspects of their life including their weight.They are often fixated on food, which includes the amount that they consume as well as the calorie and fat content.

The pattern of bulimia is often cyclical with someone setting unrealistic goals for themselves(like getting a 100 percent on every exam they take), and when they don’t reach those goals, they binge, and then they purge to try to ‘fix’ the binging.

Individuals with bulimia will also try to control their weight in other ways—by taking stimulants, by going on extreme diets such as “water fasts” where they consume only water, and by exercising excessively.

People with bulimia are usually normal weight or overweight, whereas people with anorexia are underweight. Because of this, people can more easily hide the fact that they suffer from bulimia, and can also potentially start out with bulimia, and then develop to anorexia over time.

The binging and purging cycles associated with bulimia can result in a number of serious side effects.

Repeated vomiting can lead to erosion of dental enamel, sialadenosis, which is swelling of the parotid gland, and halitosis, or very bad breath.

The back of the knuckles can get calloused from using the hand to induce vomiting, which is called Russell’s sign, and if the vomiting is forceful enough it can lead to tears of the distal esophagus and stomach itself, which is called Mallory Weiss syndrome, which can cause abdominal pain and blood to come up in the vomit, called hematemesis.

Over time, vomiting can cause dehydration and lead to hypotension—a blood pressure below 90/50, as well as tachycardia or a fast heart rate over 100 heart beats per minute.

The purging involved in bulimia can also cause a depletion of electrolytes which leads to a low level of sodium, chloride, magnesium, phosphate, and potassium, as well as a general metabolic alkalosis.

The low potassium or hypokalemia is particularly worrisome because it can lead to muscle weakness and even cardiac arrhythmias, the latter of which can lead to death.

Bulimia can also lead to endocrine changes, the most common of which is menstrual irregularities in women, who might even develop amenorrhea, where either the normal menstrual cycle stops or menstruation doesn’t start by age 15.

In addition, individuals with bulimia are at higher risk of developing diabetes mellitus, which makes for a particularly dangerous combination.

As far as causes of bulimia go, it’s been shown to have a genetic component, based on twin and adoption studies. In addition, though, there is also evidence for a strong social component.

Bulimia typically begins in teen years or in young adulthood, which is a time when individuals usually start to pay attention to the media, and rates of bulimia are higher for individuals and in societies that have higher exposure to media.

Also, although bulimia is more common in women, it’s worth mentioning that men suffer from bulimia as well, and in both genders it can often be seen among athletes and professionals who are keenly focused on their body weight and percent of body fat, like with dancers, models, and wrestlers.

Finally, bulimia is also commonly associated with other conditions like obsessive-compulsive disorder, depression, and anxiety, all of which have overlapping symptoms and risk factors.

Medical treatment with careful nutrition and weight management is important. But it’s also important to use tools like psychotherapy and cognitive behavioral therapy to help the individual and his or her family structures a new relationship around food.

For example, teaching a person to eat just a small amount of a ‘forbidden food’ and then consciously noticing the absence of severe consequences.

Bulimia is sometimes also treated with antidepressant medications, like SSRIs or selective serotonin reuptake inhibitors, and typically a combination of therapy with the medication works best for severe cases.

Alright so as a quick recap, bulimia is when somebody goes through cycles of binging and purging at least once a week for 3 months, but is typically still normal weight or overweight.