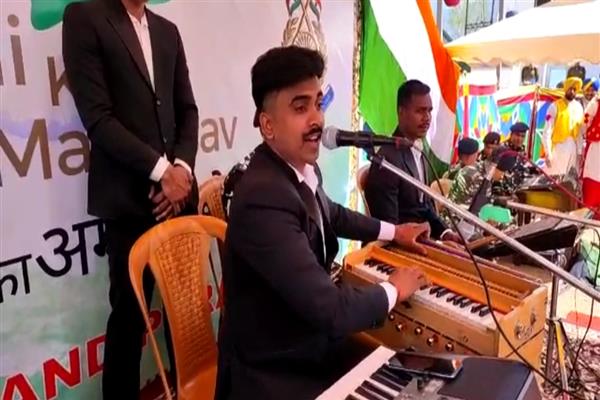 A cop of Central Reserve Police Force (CRPF) in north Kashmir's Bandipora district has been enthralling the audience with his melodious voice for years now.

Hailing from Bihar state, Mrityunjay Roy has been posted in 3rd Battalion of CRPF in Bandipora for four years and has been enthralling audiences with his melodious voice on Republic and Independence day celebrations.

Mrityunjay not only sings in Hindi but is also earning fame by singing in Kashmir language also.

On full dress Rehearsal day, Roy sang a Kashmiri song and received a standing ovation from the audience.

Talking to Rising Kashmir, Mrityunjay said that he studied the culture of Kashmir and learned Kashmiri songs to present them to people.

Mrityunjay said that when he came to Kashmir, he found Kashmiri songs very melodious and heart touching.

"I examined them thoroughly and tried to learn them and ultimately I am here to present them without any hesitation and correction," he said.

"I like Kashmiri folk songs most because of their melodious tune and lyrics. It became the main reason for me to learn Kashmiri," he added.

Mrityunjay gained attention of people first time on Independence Day in 2020 when a short video clip was posted on social media site Facebook. The cop was seen singing famous Kashmiri song "Nigaaro" and started receiving lots of praises online for his melodious voice and his talent.

"I have always been inspired by Kashmiri songs, and it is like I couldn’t get them out of my head. I have been singing in other languages as well but Kashmiri gives me a better feel,” he said.

Mrityunjay is head of CRPF band in Bandipora who perform on many events especially on Independence and Republic days. Whenever people get to know about Mrityunjay's performance, people throng in big numbers to grace the occasion and listen to his melodious voice.