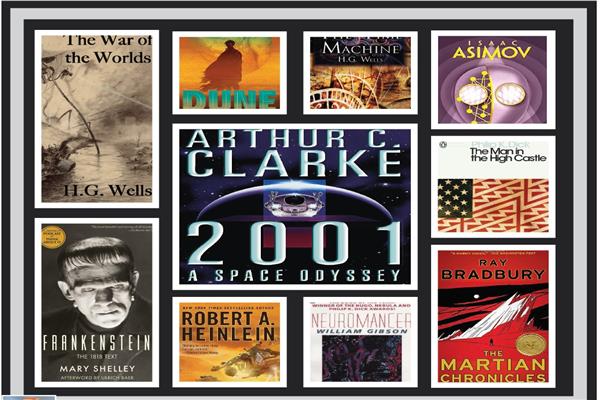 Science fiction as a literary genre has seen tremendous transformation in the last century—especially in the English speaking world. The genre—beloved of young and adults alike—has witnessed growth and popularity. While some novelists like H.G. Wells and Issac Asimov are considered geniuses of the genre, others like Phillip K. Dick and Frank Herbert have gradually established themselves as the greatest.

In this week's Sunday special, Rising Kashmir's sub-editor Irfan Mehraj lists some of the best science fiction novels one can read in the ongoing winter—especially when it's snowing. Winter in Kashmir is long and harsh. To be able to curl up in a blanket and have your imagination take you to places is a pleasure rarely enjoyed in any other season. The novels in the list mostly belong to the popular category of fiction published in the last 100 years or so.

Published at the turn of the century in 1898, the novel by the celebrated English novelist H. G. Wells has—since its publication—attained a cult status in the literary world. The novel first appeared in a serialized form in a magazine. The novel tells the classic sci-fi tale of the conflict between humans and extra-territorial beings. Told in the first-person narrative of two unnamed protagonists in England as the country is invaded by Martians. In its over two centuries of being in print, the novel is the most written about and cited science fiction novel to date. Such is its popularity, the novel has never been out of print and several films, dramas, comic books, and TV serials have been made on the plot of the book. The novel is a must-read for all science fiction lovers and for those looking to develop an interest in the genre.

Published in 1818, the novel by Mary Shelley has earned fame beyond measure. No list of best-ever science fiction books can miss this one. The author started writing this gothic thriller when she was only 18 years old and over two centuries later, the novel she wrote is still hailed as a masterpiece. The novel tells the story of a scientist Dr Frankestein who creates a monster with a scientific experiment and is horrified at what he has made. The novel is a classic horror and science-fiction brought together for epic effect. One of the important lessons drawn from the story is that just because one can doesn't mean one should and perhaps should sufficiently describe the present breakneck technological madness we are witnessing.

4. The Martian Chronicles by Ray Bradbury

American novelist Ray Bradbury published the novel in 1950. Ever since it was published, the novel has never been out of print and has been a raging success—with several cinematic adaptations to its name. The novel is an episodic novel and is considered the author's best work. It's a relatively short novel and tells the epic story of the colonization of Mars by humans who are fleeing the soon-to-destroyed Earth. The novel is a classic American science fiction novel that delves into the theme of post-war America dealing with a technologically advanced future.

The second novel by H. G. Wells, the Time Machine is a genre-bending novel that has spawned hundreds of spin-offs and adaptations since its publication in 1895. It's a novella but with great depth. It is considered the first novel to popularize the concept of time travel. Set in England, the novel tells the story of a scientist who develops a machine that can move him forwards and backwards in time. What follows is an exciting adventure.

6. I, Robot by Issac Asimov

Published in 1950, the novel is regarded as the American novelist Issac Asimov's most widely read and well-known work. Considered one of the greatest science fiction novels, the novel is prescient in its predictions of the future. It's a must-read for our time as we enter a world completely dominated by technology. The stories in the novel explore the theme of the moral and ethical implications of humankind's ever greater push for technology. The novel has influenced not only many other great science fiction writers but also scientists as well.

7. The Man in the High Castle by Phillip K. Dick

This novel by American novelist Phillip K. Dick changed his career. He would write under different pen names but after the publication of this alternative-history novel in 1962, Dick earned massive acclaim—and won the Hugo Award for Best Novel. The novel tells the alternate story of the Axis Powers—Germany and Japan winning the Second World War. It takes place in the partitioned United States of America—ruled by Nazi Germany and Imperial Japan and is as intriguing as any other novel on this list. The novel has earned worldwide acclaim for the author. The novel was recently adapted into a Television series by Amazon Prime.

British science fiction writer Arthur C. Clarke wrote his celebrated novel 2001: A Space Odyssey concurrently with Stanley Kubrick's film of the same name. Both were instant hits and are rightly featured as some of the greatest science fiction ever written and filmed. The novel tells the story of an astronaut who embarks on a dangerous mission that takes him far into outer space and brings him into contact with an alien race. The novel was written even before the man set foot on the Moon. The novel explores what such an exploration would mean for humankind. It's definitely a novel no science fiction lover can afford to miss.

Published in 1984, the novel by American-Canadian Willam Gibson has won many awards and is regarded today as the classic of the science fiction genre. It is set in a dystopian Japanese underworld, the novel touches upon aspects of futuristic technology and its impact on the human race. The novel is simply unputdownable. The central character of the novel is hacker-turned-junkie Henry Case as he is in the midst of pulling off a job that is as futuristic as anything written at that time. The novel was Gibson's debut novel and has the distinction of winning all three great science fiction awards— the Nebula Award, the Philip K. Dick Award, and the Hugo Award. It's the only novel with that distinction.

10. Starship Troopers by Robert A. Heinlein

Robert A. Heinlein is a well-regarded science fiction writer of his generation. His novel Starship Troopers is one of the most popular and controversial books. It's a military sci-fi novel. Heinlein is said to have written the book in response to the United State's decision to halt their nuclear tests. The book has been called to glorify the military and tells the story of a group of soldiers who are undergoing rigorous training in order to fight aliens in the Bug War. While it has been criticized for its overt glorification of the military, the book is still one of the most important science fiction novels of the last century.