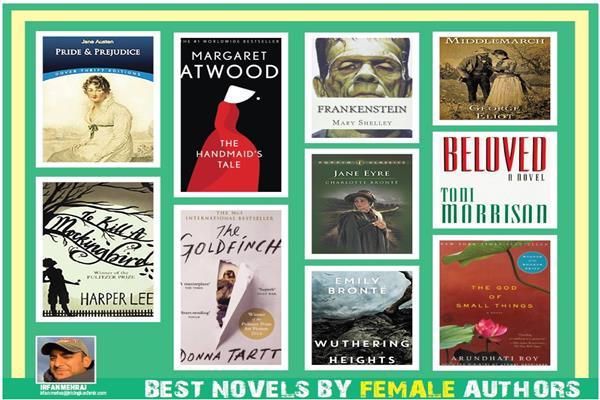 Literature, especially in the English language, was traditionally dominated by men. Over time, women writers emerged that changed how we view English Literature. In the Victorian Era in English, women novelists like Jane Austen became a sensation and queues would line up to read her books. The fame and glory she enjoyed prompted other women writers to write. Today, women writers are not only writing fantastic books which sell in millions but they are also well regarded and critically acclaimed.

In this Sunday Special, Rising Kashmir’s sub-editor Irfan Mehraj lists out some of the best novels written by women which you can read this winter. The novels on the list are modern masterpieces and ones written in the nineteenth century as well.

1. Pride and Prejudice by Jane Austen

Pride and Prejudice is a romantic novel by Jane Austen, published in 1813. A classic of English Literature weaved with sharp wit and superb character depiction. It focuses on the budding relationship between Elizabeth Bennet, the daughter of a country gentleman, and Fitzwilliam Darcy, a rich aristocratic landowner. The novel abounds in humour and wit as is the speciality of Jane Austen. Her keen understanding of social class and restrictions on women (and men too) is unparalleled. The novel is direct yet playful; searing yet light; funny yet profound. Prejudice was well received by critics and readers. It is a book one would want to return to time and time again.

2. To Kill a Mockingbird by Harper Lee

The novel is described as one of the greatest American novels ever written. Harper Lee’s Pulitzer winning masterpiece revolves around loveable rogues Scout and Jem. This classic is about growing up and learning how to make good decisions and finding the courage to stand up for what you believe in. It addresses race, inequality and segregation with both light-heartedness and compassion. The novel also imparts the lesson of honesty, justice, humility, and morality. To Kill a Mockingbird has been translated into more than forty languages and sold more than forty million copies worldwide.

The Handmaid's Tale is a dystopian novel by Canadian author Margaret Atwood. It was published in 1985. It is set in a near-future New England, in a strongly patriarchal, totalitarian theonomic state, known as the Republic of Gilead, which has overthrown the United States government. The novel, narrated by Offred, shares her point of view. She is subjugated to a male commander for the sole purpose of producing a child. It is a critically acclaimed novel that’s now also a critically acclaimed TV series. Women in this futuristic society are bereft of their identity and trapped in service to their male owners and can experience love only through their memories. This interesting little book abounds in moral vision, chilling humour, a poet's imagination and is a powerful read for women.

Beloved is a novel by the American writer Toni Morrison, published in 1987. It is a haunting yet brilliant and innovative portrait of a woman haunted by the past. The novel is set after the American Civil War and tells the story of a family in the mid-1800s. The story focuses on Sweet Home in Kentucky when an era is ending as slavery comes under attack from the abolitionists and also the family of former slaves whose Cincinnati home is haunted by a malevolent spirit who will return to claim retribution. Morrison’s Pulitzer winning book is an unforgettable novel and one of the great and enduring works of American literature. It is chilling, difficult but brilliant.

5. The Goldfinch by Donna Tartt

The Goldfinch is a novel by the American author Donna Tartt. It won the 2014 Pulitzer Prize for Fiction. This novel follows a New Yorker who is grieving his mother's death and gets pulled into an unyielding underworld of art and wealth in this enthralling and beloved Pulitzer Prize. It is a haunted odyssey through present-day America and a drama of enthralling power. Combined with unforgettable characters and thrilling suspense, it is a beautiful, addictive triumph. A sweeping story of loss and obsession, of survival and self-invention, of the deepest mysteries of love, identity and fate that connects with the heart as well as the mind.

Jane Eyre is a novel by English writer Charlotte Brontë, published on 16 October 1847. The novel extuberates intense power and intrigue. The story revolves around Jane Eyre, a plain yet spirited governess, and her arrogant, brooding master of Thornfield Hall, Mr Rochester. The book also focuses on elements of social criticism and is considered by many to be ahead of its time because of Jane's individualistic strong character and how the novel approaches the topics of class, sexuality, religion, and feminism. The novel along with Jane Austen's Pride and Prejudice is one of the most famous romance novels of all time. The novel can be easily called a masterpiece that has been teaching true strength of character for generations by its depiction of a woman's quest for freedom.

Wuthering Heights is an 1847 novel by Emily Brontë. It is one of English literature's classic masterpieces—an exciting novel of love and tragedy. It revolves around two families of the landed gentry living on the West Yorkshire moors, the Earnshaws and the Lintons, and their turbulent relationships with Earnshaw's adopted son, Heathcliff. The novel is influenced by Romanticism and Gothic fiction. Emily Brontë’s enthralling prose concentrates on the nature of human folly, defying the gender, religious and social morals of its day. It is a mystifying masterpiece that examines the cruelty of love, and how the past haunts.

8. The God of Small Things by Arundhati Roy

The God of Small Things is a family drama novel written by Indian writer Arundhati Roy, published in 1997. It's Roy's debut novel. The novel takes on the big themes like love, madness, hope and infinite joy. The story focuses on the childhood experiences of twins Rahel, a girl, and Esthappen, a boy, whose lives are destroyed by the "Love Laws" that lay down like 'who should be loved, and how. And how much.' The book examines how small things affect people's behaviour and their lives. The book also sheds light on its irony against casteism, which is major discrimination that prevails in India. Arundhati Roy has given us a book that rests on anguish but driven by wit and magic. It won the Booker Prize in 1997.

Middlemarch, A Study of Provincial Life is a novel by the English author Mary Anne Evans, who wrote as George Eliot. Middlemarch centers on the lives of residents of Middlemarch, a fictitious Midlands town, from 1829 onwards to the years up to the 1832 Reform Act. The story follows three or four plots with unequal emphasis: the life of Dorothea Brooke, the career of Tertius Lydgate, the courtship of Mary Garth by Fred Vincy, and the disgrace of Nicholas Bulstrode. The two main plots are those of Dorothea and Lydgate. Each plot occurs simultaneously. This book is a feast with many characters, many storylines, and so many beautiful sentences. A masterpiece from start to finish.

Published in 1818, the novel by Mary Shelley has earned fame beyond measure. The author started writing this gothic thriller when she was only 18 years old and over two centuries later, the novel she wrote is still hailed as a masterpiece. The novel tells the story of a scientist Dr Frankestein who creates a monster with a scientific experiment and is horrified at what he has made. The novel is a classic horror and science-fiction brought together for epic effect. One of the important lessons drawn from the story is that just because one can doesn't mean one should and perhaps should sufficiently describe the present breakneck technological madness we are witnessing.