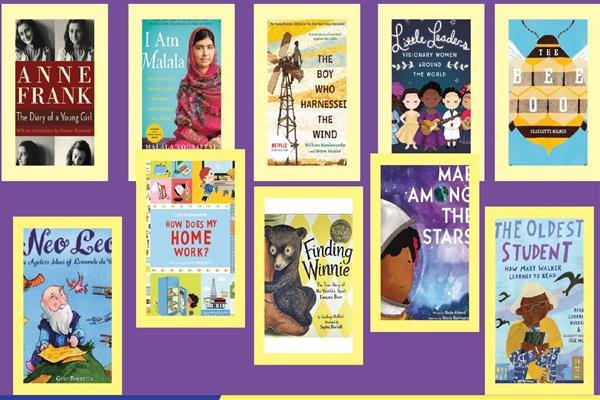 Kids are usually curious. One thing that can satisfy a child's curiosity is a good book. The interesting thing about books is that books can spark more curiosity among kids and they can go on becoming life-long learners and seekers. While fiction books for children are in abundance, non-fiction books are not so.

In this Education Special, Rising Kashmir's sub-editor Irfan Mehraj lists out some of the best non-fiction books that children can read that can impart and teach great lessons of life. The books listed here are both popular and well-regarded and should be easily accessible to parents in Kashmir.

1. Anne Frank: Diary of a Young Girl by Anne Frank

This book is classic and ever-lasting. It is one of the most monumental nonfiction books you may have read as a kid and you can certainly recommend this short book to your kid so that he/she can experience the same emotions while reading this book. The book is the diary of 13-year-old Anne Frank who writes in her diary about what her life was like for her and her family while they were hiding in Amsterdam during World War Second. The book is considered one of the greatest pieces of non-fiction books written on the period from the viewpoint of a child. The book not only displays the young Anne's youthfulness and her energy but also showcases her wisdom—which was beyond her years. The book also speaks greatly about the young girl's admirable courage and grit to hold onto her spirit during the war. It is a total must-read for your kids.

2. I am Malala by Malala Yousufzai

Malala Yousafzai is the youngest Nobel Peace Prize recipient in history. This memoir by her tells her inspiring story of standing up to the Taliban and fighting for her right to education. By standing up for her right to educate herself, Malala has inspired thousands of girls worldwide who are struggling to educate themselves. It is an inspiring book and teaches us—especially the kids—that age is just a number. One can have great wisdom irrespective of their age and Malala is just that. The important lesson to be drawn from the book is that one can be as young as 13 but one can still make a difference in the world. Don't miss giving this book to your kids on their birthdays.

3. The Boy who Harnessed the Wind by Bryan Mealer and William Kamkwamba

This book is a remarkable story about human inventiveness and its sheer power to overcome adversity. Such is its beauty the book will inspire anyone who doubts the power of one individual's ability to change his community and better the lives of those around him. The story is about William Kamkwamba, who was born in Malawi, a country where magic ruled and modern science was a mystery. The land where he lives is withered by drought and hunger, and a place where hope and opportunity are hard to find. But not for William. When he reads about windmills in a book called Using Energy, he dreams of building one that would bring electricity and water to his village and change his life and the lives of those around him. His neighbours may have mocked him and called him misala—crazy—but William was determined to show them what grit and ingenuity could do. This is a book that can teach us how passion can go a long way in making a useful contribution to the world.

For kids, role models are very necessary. The role models help them shape their lives in a positive direction and this book is packed with role models. Each page-long biography delves into the life, accomplishments, and legacy of iconic women from around the globe, ranging from writers and artists to inventors and scientists. These are characters that kids will love to read about and be inspired by. Whether kids identify with environmental activist Wangari Maathai or architect Zaha Hadid doesn't matter for each woman leader in the book will help the kids realize that they too can grow up to do something amazing in their lives. It is a must-read book and is easy reading for kids.

5. The Bee Book by Charlotte Milner

Honey bees are fascinating. We all read about them as kids. This book, which is quite colourful with excellent graphics and charts, will open the child's mind to the very complex and fascinating role of the honey bee. The book teaches the kids how this species talks to one another about what it takes to become a Queen bee and how bees make honey. The bees come across as nature's hardest workers and by reading this book, kids might learn lessons on developing a solid work ethic.

Leonardo da Vinci was a fascinating man. And this book is just the right way for kids to learn about him. Considered a true renaissance man, Leonardo da Vinci was a man who came up with ideas for inventions that wouldn't come to fruition until years later? The book shows that Vinci thought about ideas that were invented much later. From contact lenses to cars and robots, da Vinci thought about them all. The book is important as it introduces one of the world's greatest thinkers to kids.

7. How Does My Home Work? by Christine Butterworth

This is a book for the kids who can't stop asking questions and who are very curious to understand how everything works in your home. This is a book for the kids who ask how and you have to scramble your head for the answers. The book is packed with images and would satisfy any kids' around-the-house curiosities, for instance, how exactly do we get electricity and water. One of the best features of the book is that it may teach you things about your home and how things work around your home which you may have been taking for granted.

All kids will probably be aware of the famous bear Winnie the Pooh, but has anyone wondered about the non-cartoon bear? This book is an answer to this question. It is a wonderful book that tells the story of how one veterinarian Harry Colebourn rescued and adopted a baby bear, named her Winnie, and eventually brought her to the London Zoo, where she met a little boy named Christopher. The book is adorable and really enjoyable.

9. Mae Among the Stars by Roda Ahmed

This is a classic non-fiction book about how determination can change imagination into reality and is an essential quality to have to accomplish things in life. This is a wonderful children's book and is considered remarkable all over the world. The book follows the journey of Mae Jemison, who was the first African American woman in space. The book tells the story of how she accomplished her childhood dream of soaring amongst the stars. It is a truly splendid book about a real-world experience.

A bit serious on the mind, this book is the real deal though. It's about slavery and how real-life adversity can sometimes give you the best lessons in life even if you are old. The book is a biography of Mary Walker, a real-life woman who was born into slavery and learned to read at the age of 116. This inspiring biography encourages a lifelong love of learning for young readers. The book also teaches us about American history from the Civil War to the civil rights era. The book is considered one of the greatest non-fiction books written by a black author. The book also has illustrations. Read it for its subject and its sheer depth.