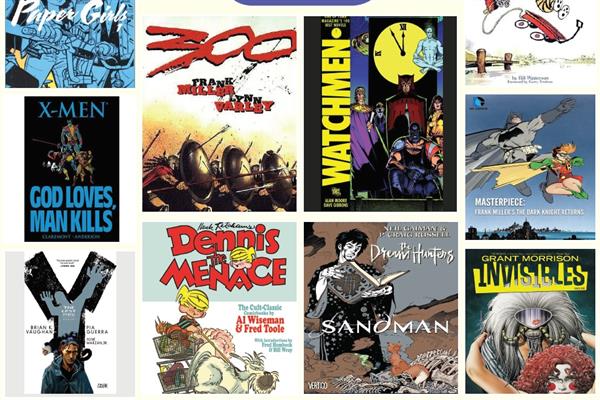 Comics are the staple form of literature for children across the world. Comics are only educational; they are fun to read and can be a great form of literature as well with graphics and illustrations. Reading with graphics is always more stimulating. To read comics is to go on a little adventure as the comic stories are usually light and fun. There are some great comics for children out there and to pick up the best ones is a task fraught with subjectivity.

In this Education Special, Rising Kashmir's sub-editor Irfan Mehraj lists out some of the best comics for kids. The list mostly has the popular comic ones and ones which children have enjoyed all across the world.

Calvin and Hobbes is a widely popular American comic strip created by the cartoonist Bill Watterson. It was syndicated from 1985 to 1995 and earned popular and critical acclaim. Ever since its publication as a comic strip, the series has enjoyed massive popularity and has been a great cultural influencer in the way comic books are seen and read. For many children, daily comic strips are something they get hooked on. Although the comic series ended three decades ago, this comic by Bill Watterson about a mischievous boy and his stuffed tiger still gets the attention of readers all over the world and the strip is still relevant. The comic strip has now come in the form of books and children can binge read it instead of waiting for it every day. When it was at the height of its popularity, the comic strip was featured in over 2400 newspapers across the world.

Batman: The Dark Knight Returns was a 1986 four-issue miniseries by Frank Miller, illustrated also by Miller and Klaus Janson, and published by DC Comics. The comic series is one of the greatest strips of all time. The Dark Knight Returns tells the story of Bruce Wayne who, at 55 years old, returns from retirement to fight crime and faces opposition from the Gotham City police and the U.S. government. The story introduces Carrie Kelley as the new Robin and culminates with a confrontation against Superman. This Frank Miller-penned miniseries is an inspiration behind the Batman V. Superman movie. This graphic novel is the first time that Batman and Superman went toe-to-toe. The strip marked the reinvention of Batman into the gritty and powerful hero people across the world love. Although very popular, the book is filled with violence, and political satire and is as popular and relevant today as it was released then.

Dennis the Menace is a cult comic strip—loved by readers across the world. It was a daily syndicated newspaper comic strip created and illustrated by Hank Ketcham. The strip debuted in 1951 in nearly sixteen newspapers. The comic strip takes place in a middle-class suburban neighbourhood in Kansas and follows the antics of a five-year-old Dennis Roger Mitchell. The comic strip focuses on the comic efficacy of Dennis's personality and how his genuine attempts to help others in need, combined with his youthful energy and enthusiasm always lead to trouble wherever he goes. Upon its serialization, the comic strip was so successful. It was adapted to other popular media, including several television shows, both live-action and animated, and several feature films.

Another DC Comics series that was quite well received upon its release. It was created by Neil Gaiman, who is the writer of several critically acclaimed books and comics – including American Gods, which is now a Television show. Although Gaiman has written many acclaimed works, his Sandman series is his best-received work—both with critical and popular acclaim. The Sandman series weaves together mythology, folklore, and fairy tales in a new and refreshing manner, while still staying original and spellbinding. The Sandman puts together dark fantasy, horror, and surrealism. The Sandman tells the story of Dream of the Endless, who rules over the world of dreams. The comic series ran for 75 issues from January 1989 to March 1996.

Watchmen is one of the greatest American comic book miniseries by the British creative team of writer Alan Moore, artist Dave Gibbons and colourist John Higgins. The series was published monthly by DC Comics in 1986 and 1987 before it was collected in a single-volume edition in 1987.  No list of best comics can ignore Watchmen. The comic book series is the best-selling graphic novel in comic book history. The comic series spun off a major motion picture and, later, a television series. Watchmen originated from a story proposal Alan Moore submitted to DC comics featuring superhero characters that the company had acquired from Charlton Comics.

Written by Brian K. Vaughan and illustrated by artist Cliff Chiang, Paper Girls is a mystery and science fiction comic book series. With all major comic strips focusing on the adventures of men and are male-driven, the Paper Girls features a group of girls in leading roles. The comic book series follows the story of four 12-year-old newspaper delivery girls (Erin, MacKenzie, KJ, and Tiffany) set in Stony Stream, a fictional suburb of Cleveland, Ohio. One morning, while they are out to deliver newspapers after Halloween, the town is struck by an invasion from a mysterious force from the future. The girls become unwillingly caught up in the conflict between two warring factions of time travellers. The comic takes place between several eras, with the squad battling a mysterious force that has them in constant conflict. Every young girl should read this novel.

X-Men: God Loves, Man Kills is an original graphic novel by Marvel Comics published in 1982. Although there are many X-Men titles that one can feature in the best comics list, this one is fantastic as it encapsulates everything that this franchise is all about. The story centres on a reverend named William Stryker who attempts to start a holy war against the entire mutant race, no matter how much blood he gets on his hands. The graphic novel is the perfect story of a combination of social commentary and superhero action and is considered the highpoint of Claremont’s legendary X-Men run. In 2003, the book was immortalized when the movie X2: X-Men United recreated many of its plot points.

Now, this one is a dystopian, post-apocalyptic graphic novel that has earned huge fame all over the world. It is considered one of the most successful comic books that have come out of Vertigo. The comic book series is created by Brian K. Vaughan and Pia Guerra and was published by Vertigo from 2002 through 2008. The comic strip is about a man named Yorick Brown, who is the last surviving man after a mysterious plague wipes out the world’s male population. Along with his pet monkey, Ampersand, Yorick embarks upon a journey to find out the origins of the plague and why he's still alive. It is an exciting comic book and should be enjoyed for its sheer story-telling. The comic book series is full of humour, heartbreak, and suspense.

Yet another popular comic book series, The Invisibles was a comic book series published from 1994 to 2000. It was published by the Vertigo imprint of DC Comics. The comic book series was created and scripted by Scottish writer Grant Morrison The series was drawn by various artists throughout its publication. The comic book series loosely follows the doings of a single cell of The Invisible College, a secret organization battling against physical and psychic oppression using time travel, magic, meditation, and physical violence. The comic book series blends anarchic and existential undertones with the high concepts and ramblings associated with an acid trip. It is one of Morrison's most fascinating series. Morrison is mostly known for his experimental superhero work on titles like Arkham Asylum and New X-Men, but this makes all of that look like Betty and Veronica in comparison. Anyone looking to dig deep into the sordid corners of the comic book world should at least dip their toes into these psychedelic waters.

The 300 is a brilliantly executed graphic novel that chronicles the legend of the Battle of Thermopylae – in which 300 Greek Spartans held off an entire invading Persian army. The graphic novel was so popular that it was turned into a popular feature film. Although the graphic novel has a serious subject line and story, it is a delight to read as it is gritty and great artwork. The comic series was created by Frank Miller, the supremely successful and popular American illustrator, who has won a major comic book industry award.