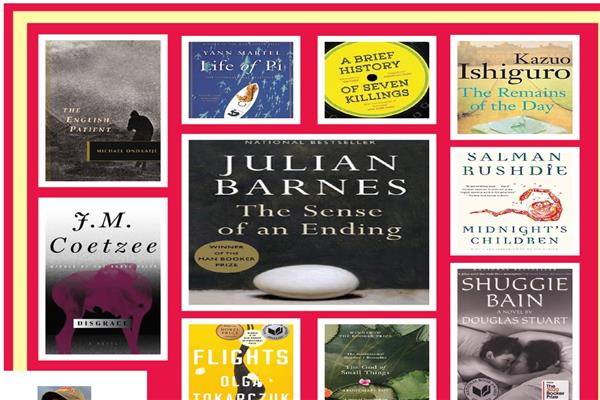 The Booker Prize award is one of the most prestigious awards for fiction written in the English language. Given out every year, the award is internationally well known and has been given to both popular novelists and lesser-known ones. Usually, the winner of the Booker Prize gets international publicity with the award and a significant boost to the sales of the book. In the first years of the Prize, the award was only given to the novels written in by authors from the Commonwealth, South African, and Irish but in 2014, the award was widened to be awarded to any English-language novel. Considered a high profile literary award, the Booker Prize is one of the most anticipated awards of the year.

For this Sunday Special, Rising Kashmir's sub-editor Irfan Mehraj lists some of the best Booker Prize winning novels of all time. The novels are geographically wide-ranging and include books written by both well-known and famous novelists and somewhat lesser-known ones.

1. The English Patient by Michael Ondaatje

Published in 1992, the novel by Micheal Ondaatje is a feat of English literature. The story revolves around four different people who are brought together at a villa in Italy during the Second World War. The four characters include the main protagonist of the novel—a burnt man from England, a Canadian nurse, a Sikh British Army engineer and a Canadian thief. Written in a style that is both ruminating and languid, the author dwells on the main protagonist's revelations before his injuries. The character is suffering from amnesia and is burnt very badly, and is recalling moments from his life before he met the accident. The book is considered one of the greatest Booker Prize winning novels of all time. It only won the Booker Prize in 1992 but also won the Governor General's Award in the same year. Such is the feat and popularity of this novel—it was awarded the Golden Man Booker award in 2018 in commemoration of the 50th anniversary of the Booker Prize. The book was adopted into a motion film in 1996 directed by Anthony Minghella and was a critical and commercial success and won nine Academy Awards—including Best Picture and Director. For anyone interested in war literature, the book by Ondaatje is a must-read.

South African novelist J. M. Coetzee won the Booker Prize in 1999 for Disgrace—a novel of painful beauty. The novel revolves around a lecturer David Lurie who is having an affair with his student and is met with disgrace after disgrace. The affair with the student costs him his teaching job and he is forced to resign. Left with no option, David retires to settle to his daughter's isolated farm on the edges of Cape Town. Initially, life goes well but when he and his daughter are brutally attacked, their relationship is tested beyond limits. The novel will shock any reader not aware of the history of South Africa—its pre-apartheid days and post-apartheid days. It is a brutal examination of the violence of the post-apartheid days. Upon its publication, the novel was hailed as a masterpiece. In 2006, British newspaper The Observer has named Disgrace as the greatest novel of the last 25 years in the years between 1980 and 2005. In 2019, Disgrace was listed as one of the 100 most influential novels by BBC News.

3. The God of Small Things by Arundhati Roy

Indian author Arundhati Roy's debut novel won the Booker Prize in 1997. The novel is a sensational piece of fiction written by any contemporary Indian novelist and examines how small things in life affect one's behavior. It examines how casteism—which is a form of discrimination in India—impacts the lives of ordinary people. The story revolves around young twins Rahel and Estha and their exploration of life. The novel was Roy's only novel until the 2017 publication of The Ministry of Utmost Happiness. The God of Small Things—though verbose—is dazzling and is an absolute joy to read.

Winner of the 1981 Booker Prize, the novel by Indian-origin British-American novelist Salman Rushdie is considered a masterpiece of post-colonial and magic realist tradition of literature, the book not only won the Booker Prize in 1981 but was awarded the Booker of all Bookers in 1993—the best novel ever to have won the Booker Prize. The story revolves around a host of characters who are born at the stroke of midnight when India gained independence from the British Empire. The children born at the stroke of midnight—known as Midnight's Children—have telepathic powers and can connect with each other. The novel was listed in 2013 by BBC as the "best-loved novel" in the UK. Penguin Books also added the book to the Great Books of the 20th Century.

5. Life of Pi by Yann Martel

Winner of the 2002 Booker Prize, the book by Yann Martel is an international best-seller. One of the most loved novels of all time, the novel by Yann Martel revolves around a young boy who is surviving on a lifeboat in the middle of the Pacific Ocean. His only companion is only a tiger. The novel is well regarded and loved for its themes and questions the meaning of life in all its complex ways. The novel has gained international fans and readers have drawn religious metaphors from it. The relationship between the man and a beast is examined in the novel and is a must-read novel of our times.

6. A Brief History of Seven Killings by Marlon James

The expansive novel by Marlon James won the 2015 Booker Prize and it was the first time that a Jamaican born author won the coveted international prize. It's the third novel by the author and the story revolves around the attempted assassination of the famous Jamaican singer and musician Bob Marly in 1976 and its aftermath. The novel spans several decades and covers the drug wars in NYC during the 1980s and transformations in Jamaica during the nineties. The novel is divided into five sections and each section is named a song and covers events of a single day. Wide in its range of characters and a tome of a book, the novel was well-received upon its publication.

7. The Remains of the Day by Kazuo Ishiguro

Kazuo Ishiguro is a genius and his novel The Remains of the Day is testimony to this fact. The novel won the 1989 Booker Prize and is still widely read and hailed as the essential reading of our times. The novel takes place in post-war Britain and revolves around the story of an English Butler reflecting on his past and the revelations into his character and the character of Lord Darlington. The novel by Nobel Prize winner Ishiguro is considered one of the most highly-regarded novels of the post-war British world. Such is the author's genius, he has been awarded four times for the Booker Prize.

8. The Sense of an Ending by Julain Barnes

This slim novel by British novelist Julain Barnes won the Booker Prize in 2011. The novel is about time and memory and how we remember things impacts our day-to-day life and our responses to it. The story follows a retired protagonist Tony Webster and his memories of how he and his friends met an eccentric boy named Adrian Finn. The novel unravels marvelously well and has a thriller-like ending. The novel fundamentally questions the presumption that our memories are accurate and it does so by making Webster realize this at the end of the story. The book is Barnes's eleventh novel and is most loved to date.

This debut novel by Scottish-American writer Douglas Stuart won the Booker Prize in 2020 and the well-deserved one it was. Only six authors have won the Booker Prize for their debut novel Stuart is the latest on the list for his fierce novel Shuggie Bain. The novel tells the story of a young boy Hugh Shuggie Bain, who spends his childhood in poor conditions in Glasgow, Scotland. The novel has been admired for its lyricality and truly so. It takes place at a time in Scotland (part of England) during the 1980s when unemployment is high and there are tensions within families against the backdrop of the raging drug menace crippling the society. If you want to end this year by reading a truly heartbreaking tale of love and addiction, Shuggy Bain is the one for you. It is only rare in the literature that a story about a working-class family is told so well that you don’t want to leave it but be absorbed and hurt by it.

This fragmentary novel by Polish novelist Olga Tokarczuk won the Man Booker International Prize in 2018. It was the only time that a Polish writer had won the coveted prize. The novel Flights is a coming together of several vignettes forming a whole. There are a total of 116 vignettes in the novel. The novel was hailed as a masterpiece upon its translation into English. Olga’s style is direct and dreamy. Although made up of fragments, I couldn’t help but notice that the novel leaves a lasting impression on one’s mind and the writing rings loud. In 2019, Olga Tokarczuk was awarded the 2018 Nobel Prize in Literature as the first Polish female prose writer "for a narrative imagination that with encyclopedic passion represents the crossing of boundaries as a form of life."