Basit Mushtaq: Kashmir’s own Picasso with a twist 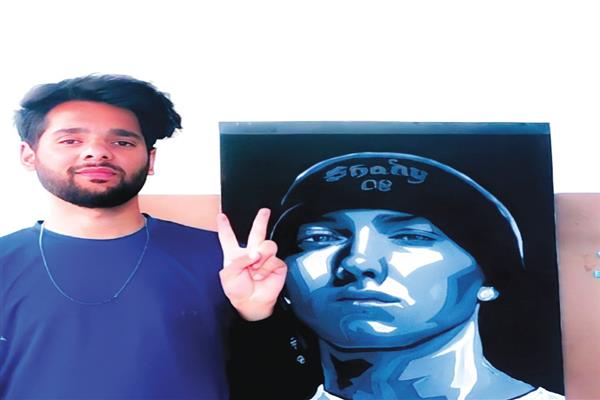 When children of his age were busy playing cricket and video games, Basit used to create sketches of every other thing he observed around him. His parents would often buy him drawing books, pencils and colours when they discovered his talent, which triggered the spark in him.

Born and raised in the Pinglina village of South Kashmir’s Pulwama district, Basit has recently completed his graduation and is currently planning to pursue his further studies in Fine Arts.

His love for art started when he was in primary school. One day on a chilly cold winter morning, when the schools were on vacation, he started drawing lines on the paper and playing with the colours. He practised that again and again until he learnt pencil controlling which enhanced his artistic skills.

“My passion for drawing started when I was just 7 years old and it has been groomed over time. I figured out that sketching and painting are special things about me that I always want to nurture and later on I started drawing cartoons, making expressions and sketching things I used to see around me which has helped me a lot in my journey,” he said.

From sketches to charcoal portraits, paper to canvas, he has come a long way. He has developed his own techniques of blending charcoal and graphite to give a sketch a more realistic look.

“Initially, I was not much proficient in blending techniques. But, I tried my own techniques for portrait sketches; It came up so well that with no time, I started getting recognition in school and college,” said Basit.

He added, “My friends, family and teachers have encouraged me a lot. Their love and support are the only things that have kept me going.”

For him, art is an expression of thoughts, emotions and desires which brings peace to the mind and soul. His art mostly depicts the present-day situations and is a reflection of love, peace and hope.

“While drawing a portrait, hands and hairs are the hardest things to draw due to all their possible positions and texture details. Drawing eyes is my most favourite part because eyes are the things that attracts a portrait, and they capture the personality of the subject and should be more realistic.”

He first portrayed the famous Afghan Girl, known as Sharbat Bibi whose photographic portrait appeared on the June 1985 cover of National Geographic. He said that his favourite portrait till date is the ‘Afghan Girl’ only because that is the beginning of his artistic life.

Basit said that he has started taking orders, and has currently put his work for auction on OpenSea which is a marketplace for NFTs. “I am getting a positive response from everyone right now and I am thinking of making a career in it, he said.

The most amazing thing about his art is that he can paint with whatever he can lay his hands on. From flowers, scissors, to toothbrushes and tables, he can paint with anything. Not only this but he also draws upside-down paintings. He can also paint with his eyes closed or standing behind the canvas. He only needs a glimpse of the face to be able to draw it using any object.

“I have grown seeing people who were not as privileged as I was and I always felt the urge to help them in any way, I used to get calls from people saying that they cannot afford the expensive art materials for the drawing, sooner I realised that art is not bound by the expensive materials, and felt like doing something unique that everyone can afford, that’s the reason I use random objects as my paintbrushes to make suspense art,” he said.

One of his sensational creations was the painting of the American Rapper Eminem Bantai, which he created by putting an axe in the paint and drawing with it. The rapper was so impressed that he went right ahead to share the masterpiece with others on social media.

Basit continues to surprise the budding artists who wait to see what he uses next to create his masterpieces. Talking about his inspiration he said, “Boubou Niang, a famous suspense artist who is known for upside-down paintings and painting using all sorts of objects inspires him, he follows his work and learns different methods of painting from him,”

Initially, Basit started learning from art tutorials from YouTube and gradually after portraying bit by bit he achieved complete mastery over it. “When I used to sketch or make graphite art, I used to watch videos on YouTube, I have learnt many techniques from the platform and I learn new things every day.”

He said “Now, I have my own YouTube channel ‘Basit Mushtaq Art’ where I post tutorials of sketching, portrait making, photorealism, suspense art etc for the upcoming budding artists. Nothing would give me more happiness than teaching art to the ones who think they cannot do it.”

When asked what are his plans on this, he replied, “Through my art, I want to bring effective changes so that art is given as much importance as other subjects, and I want to grow my online presence by selling my artworks online.I also want to be a part-time art mentor for underprivileged people in Kashmir.”