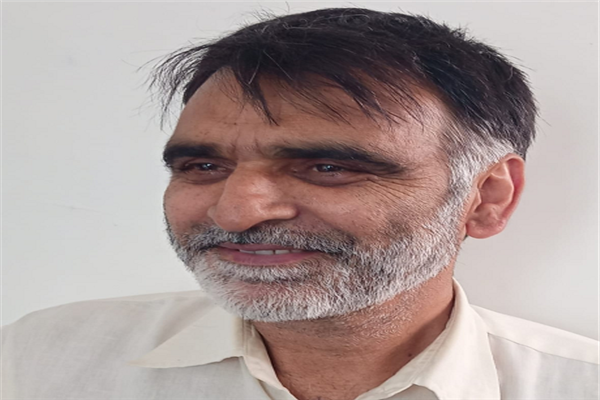 Barkat Ahmad Ganai, a professor of Kashmiri language, was doing his usual job until he heard a speech of an innovator Ghulam Mohi-ud-din Bhat. He couldn’t get some powerful lines of the speech out of his mind.

In 2009, an event was held at Degree College Boys Anantnag for which Barkat was given responsibility for its arrangement. Little did he know that the event would change his perspective of life.

Hailing from Anantnag, 63 years old Barkat, while recalling the event, said, “In the speech, Ghulam Mohi-ud-din Bhat said that we are waiting for English people to solve our problem but we have to solve our own problems. It echoed in my mind for almost three months. I started looking for the problems that I and the people of my society are facing.”

After much thinking, Barkat ended up with the idea that despite having good water sources, there is a dearth of electricity.

“I read a lot about this and found that we have a lot of unutilized water resources and I found a possibility to do something with it,” he said.

To minimize the dearth of electricity, he thought of buying a low cost technology and introducing it in Kashmir.  He found a water turbine called Archimedes screw turbine that runs with the energy of water and this turbine gives 40 rotations per minute.

“The Archimedes turbine which is a centuries old invention was available in other countries but not in India and it was also very expensive. I came to the conclusion that I have to manufacture it myself,” he said.

Having no knowledge of mechanics, he tried hard to come up with a turbine but failed at many attempts. He joined LinkedIn and posted “we have much water and less electricity.” To his post he got an immediately response from a person.

He said, “One person from Italy suggested that I read a book. When I started reading that book, I found that from the last many years much has been done already and only we are ignorant people. This turbine was already invented 2000 years ago so I thought that I was living in a foolish world.”

To kickstart his project, he started a workshop at his home and started working. He shared the information with his students at college and one of his students namely Khursheed Ahmad came forward and joined him. They started working in 2010 and after three years, they came up with a turbine.

Almost after 15 failed trials, he thought of giving up the idea. “We didn’t know anything about mechanical engineering and we stopped for some time. I again called Khursheed and we went to the river side to try the turbine and it worked.  We immediately started modifying it,” he said.

The turbine was fitted in a big drum and some changes were made for another try.

“In next try, we got 200 rotations per minute which was really something. We believed that we were on the right track. We improved it further and applied to the Department of Science and Technology through professor Mohiddin, the one who motivated me. He invited a team to visit,” he said.

The innovators received some grant and designed the machine for commercial purpose which is installed in between a place in Pahalgam and Anantnag,” he said.

In 2019, they were expecting a team from Delhi for further inspection but due to unavoidable circumstances, it couldn’t happen.

Barkat also attended a few meetings in Jammu where he came across a suggestion that the turbine should be used to manufacture hydrogen.

“In foreign countries, there are 25KW units and those are in the thousands and lakhs. Water is a big source of electricity worldwide. Canada uses ocean water. Ocean water is 1/4th efficient to river water.  River water is kinetic as it's flowing and always high in energy. We can get good electricity by utilizing the river water here,” he said.

He further said that the Micro Hydropower concept is yet premature to Asian countries.

“With 5KW, we can electrify rural villages of 100 families having 200 lamps of 5 Watts. It is cost efficient and can be used for rural areas especially for those areas where we have hilly population,” he said.

He further said that if Micro hydropower is utilized for the production of Hydrogen, the cost of Hydrogen will be reduced by 60%.

“Hydrogen is an efficient fuel and the future of economic progress will be dependent on clean and green energy,” he added.

Believing that the fields of culture, education, innovation and research are inexhaustible fields, he said that more work should be done in these fields.

Another cost-effective innovation that he has made which caters to rural populations is the water pump.

“I have come up with a water pump with the same technology. The water pump works with the flow of water. The energy input is from flowing water. It pumps 10 liters of water up to 500 meters so the areas over the hills which are mainly dry can be utilized with this technology,” he said.

Owing to the absence of angel investors, he said that takers of technology are very less which has made innovators take a back seat.

“When we get a government job, we believe that we have got everything and nothing more is required in life. I believe one should go and explore things rather than being satisfied with what we get,” he said.

Apart from being an avid reader, he keeps on finding ways to engage himself and he has also studied about internet technology.

He said, “We are more concerned about learning but the rest of the world is learning to speed up to identify and solve the problem.”

His aim is to enhance the speed skills of the child from the very beginning. His daily routine is to study, prepare the questions and publish the material on his website. He further said that his website has currently 50 daily visitors from USA, England and Virgin Island.

He further said that despite having a good number of innovators, the ecosystem for innovations in Kashmir cannot be developed until people come forward to support the technological ideas.

To boost up the innovators, on his Facebook handle, he posted that he is willing to support a technological idea. “I will fund the idea and I am available to help the people who have technological ideas.  We can create a place where good ideas are appreciated and supported,” he said.

Fondly called as Barkat Nida  by people, he has post graduated from University of Kashmir and worked in the University for two years as an Ad-hoc lecturer. Then he joined Higher Education Department as assistant professor and retired in 2018.