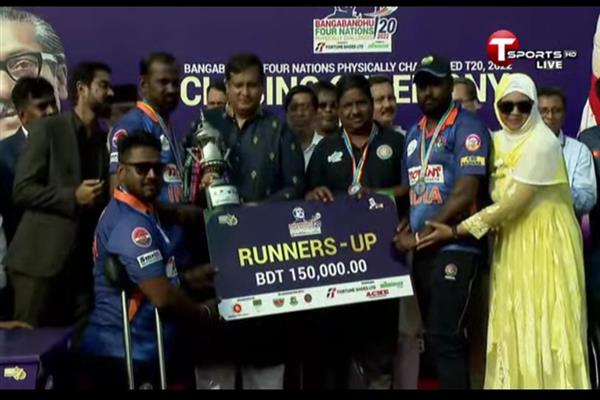 While playing first, team India could score 107 runs for lost of 5 wickets in 20 overs quota, in which Ghulamdin 28, Kailash Prasad 21, MS Shiva 23, and Sachin Shiva contributed 24 runs.
For Bangladesh, Woven took two wickets. Sajjad and Russell took one wicket each.

While chasing the target,  Bangladesh Divyang cricket team achieved the target comfortably in 12 overs while losing just one wicket thus registered victory against team India in the final match.

The man of the match was awarded to Kajol who took the one wicket, and made important 60 runs for team Bangladesh.

Earlier, Bangladesh Prime Minister Sheikh Hasina was watching the match from the Prime Minister's Office by being virtual in the eighth over of the match.  And with the announcement of BDT.10 crores for Divyang Cricket Association Bangladesh, BDT. 5 lakhs to each player was also announced on the occasion.

The prize distribution was done by the Sports Minister, Government of Bangladesh Zahid Ahsan Rasal.

Sheikh Abdus Salam, President of the Bangladesh Cricket Association for Physically Challenged, Maqsood Ur Rahman, General Secretary of the National Paralympic Committee, Maqsood Ur Rahman Divyang, General Secretary, Board of Control for Cricket in India, Haroon Rashid, CEO Ghazal Khan and President  Mukesh Kanchan were also present on the occasion.

It is pertinent to mention here the four nation divyang cricket tournament is being organised in memory of Father of the Nation of Bangladesh Sheikh Mujeeb Ur Rahman on his  100th anniversary occasion.