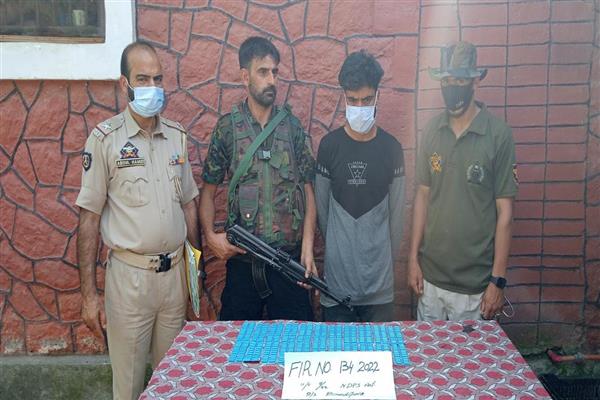 Bandipora August, 08: Continuing its drive against drug peddlers, Bandipora Police on Monday said to have arrested a drug peddler and recovered contraband substance from his possession.

A Police official told Rising Kashmir that acting on a specific information, police Party of police station Bandipora led by SHO Bandipora Ashiq Hussain and PSI Rakesh Kumar under the supervision of DYSP HQRS Bandipora Shafat Mohmmad laid a surprise Naka at Papachan.
He said that during the checking movement one person was found suspicious and on his personal search 550 Tablets of SposmoProxyvon Plus were recovered.
He said that the arrested person has been identified as Latief Ahmad Rather son of Mohmad Munawar Rather of Gamroo Bandipora.
He further said that in this regard, case FIR No. 134/2022 under relevant sections of law stands registered at police station Bandipora and further Investigation has been taken up.
He also said that the general public is requested to come forward with any information regarding drug peddlers in their neighbourhood and added that persons found indulging in drug peddling will be dealt strictly as per law.