Bait-ul-Meeras: A museum that connects youth with roots 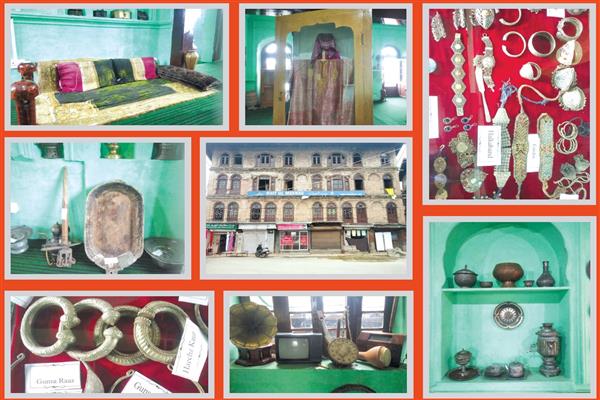 With an aim to make the younger generation aware about Kashmir's rich cultural legacy and tradition, a valley based NGO has set up a heritage museum'Bait-ul-Meeras' in Downtown Srinagar.

Established by HELP Foundation in September 2021, Bait-ul-Meerasis the second biggest private museum in Kashmir after Meeras Mahal in Sopore.  It is situated on the banks of river Jhelum in Ael Kadal area of city and has hundreds of items to display.

Chairperson, HELP Foundation, Nighat Shafi told Rising Kashmir that the idea behind setting up Bait-ul-Meeras was to educate the young generation about the rich and cultural heritage of Kashmir.

"Our children are not aware about their culture; they are living in the virtual world.  Due to lack of interest, they have forgotten their heritage and cultural legacy. We should be proud of what we have," she said.

Nighat says Bait-ul-Meerasis an effort to retrieve the artifacts and other items of the bygone era that have faded away from the cultural landscape.

"Over the past one year, we got an overwhelming response from the visitors. They were satisfied with our efforts of preserving and protectingour history," she said.

About Shahi Masnand that was brought by Abdul Aziz Mir Bow, resident of Rajpora area of south Kashmir, Nighat says Bow was her great grandfather. "It is an antique piece in Kashmir and must be over 110 years old. In our family we used it for special occasions including marriages. Last year, I decided to keep it in the museum so that people will know about it," she said.

Nighat says they are trying to get more things in their museum. It is a place where people can display their valuable collections like religious manuscripts and family inherences during special occasions. Moreover, art exhibitions and cultural events are being held from time to time, she said.

Regarding present plans, Nighat said they are still collecting the rare objects across the Valley. Whatever historic we find in any part of the Valley, we add to the collection, she said.

Nighat believes that museums are best caretakers of objects of historical importance. "Here items are preserved and documented properly so that their worth grows. Private museums are the safest bet for this heritage as we do it out of passion and not for any profit," she added.

Describing Bait-ul-Meerasas the place where children can come and learn about their culture and heritage, she said,“It has become a breathing space for the local population and remains abuzz with activities throughout the year.”

Most of the artifacts on display are the items of daily use that were a common sight in Kashmir until the end of the twentieth century.

Project Coordinator Bait-ul-Meeras, Hakeem Javeed said people are getting conscious of their heritage and this initiative is a small effort to preserve the rich history and heritage of Kashmir.

"From the past several years, we were looking for a good space along the river Jhelum and finally we found it last year in the heart of Downtown," he said.

Javeed says with the coordination of the owner, the dilapidated building was then renovated. For decades, this building was empty and there is also history behind it.

"This building was constructed during the era of Dogra King Maharaja Partap Singh and was a property of the Kaul dynasty who were influential and reputed Kashmiri Pandits." he said, adding “after 1947, the most of Kaul dynasty members left Kashmir and sold it Muslim family know as"Halwae-wean".

Later, we started a campaign across Kashmir to get a collection for the Museum, he said.“Some donated utensils, musical instrumentals and other things. It was a tough journey for all of us," he said.

He says Kashmiri women have always been inclined towards wearing jewelry. “Our museum has around 50-60 types of jewellery items that were used by women in the past.”

In clothing the museum possesses Heirloom Kimkhab Pheran, a wedding robe which is 150 years old, costumes, Dastaar and Pulhor.

"In this highly connected world today, the youth travel and interact with their counterparts around the world. Hence they should be aware of their roots, their culture and able to explain and define the place they came from," he said.

Javeed says there are other sections of Bait-ul-Meerasincluding Art and Craft and Downtown is a hub of artisans who have inherited the art from their forefathers.

"We are acting as a vibrant platform for them. We train and teach students how traditional Kashmiri crafts are being made. Some of the traditional crafts include Ari, Sozni, Pashmina and carpet weaving," he said.

Javeed says for live demonstration yender (spinning wheel) and weaving looms have been set up inside this section to educate the young generation about their rich heritage.

There is also a public library with the variety of books catering to different age groups. “From story to fiction books our library is home to each book," Javeed said.

The representatives of Bait-ul-Meeras say that they will continue to work hard so that there will be more such platform for our youth in Kashmir.

“Anyone can donate us their assets ( which have museum value) and we will put them on display in our museum,"Javeed said.