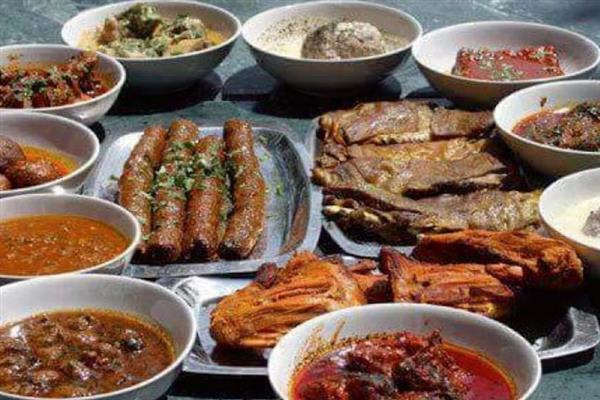 Azmat Ali Mir, a computer science engineer, from Srinagar was married in a non-Kashmiri family in Bangalore. Soon after moving to a new city, Azmat started missing her home and everything associated with it. Passionate about her culture, Azmat decided to have a small get together at home with her friends and batchmates who were also in the city.

She was expecting meager attendance of 10-12 people, but soon, she realized a big gathering of around 200 are excited to attend the party.

“I realized, it is going to be a massive affair and need professional help, so I looked for Kashmiri restaurants in Bangalore where we could all meet and spend some time together,” recalls Azmat.

Although she did meet her friends and also made some new acquaintances, but, Azmat realized, the taste of food served in the name of Kashmir food during the party was far from the real deal.

"It was a great get together, but the food which was served in the name of Kashmiri food was horrible. There was nothing Kashmiri about the dishes which were served to us," says Azmat.

Passionate about her culture and her zeal to go to any extent ensure it survives and thrives, Azmat arranged an event later in December 2018

She invited more than 1000 Kashmiris including Zareef Ahmed Zareef Saab, Rayees Mohiuddin, Reshma (Abdul Rasheed), Ali Saffudin, Mohammed Muneem and his band Alif and Aabha Hanjura and her band Sufistication to make it memorable. The event was named “Koshur Saal.”

In her pursuit to have everything authentic from Kashmir, Azmat, went on to get “Wazas” (Kashmiri for chef) from Kashmir to prepare authentic Kashmiri Wazwan (usually seven course meal) for the event.

“I didn’t want to take any chances and wanted to give people the real taste of Kashmiri Wazwan. So I flew the same chefs from the Valley who had cooked on my marriage,” recalls Azmat.

The event was a smash-hit among the community.

Seeing the response, an entrepreneur’s brain in Azmat woke up. As the wazas from her native place were still in the city, Azmat decided to give Bangalore a taste of what authentic Kashmiri food actually is. She started a “cloud-kitchen,” and named it “Sarposh.” Her husband extended his full support to her to ensure that his wife does not fail in her new venture.

For over a year, the duo operated as a cloud kitchen, and attended food festivals, catered for events, private experiences and did online deliveries.

Sensing the good response from the public, the husband-wife, six months into the business, decided to give a form to Azmat’s dream by buying a space for their restaurant in August 2019.

"Before, we could have executed anything, the abrogation of Article 370 took place and all came to standstill,” says Azmat.

However, the couple did not give in to the challenge and eventually, in January 2020, they took the plunge and started a fine dining Restaurant and Tea room in the Indiranagar locality of Bangalore.

There was another hiccup in the wings for Azmat’s dream to thrive in. The lockdown to prevent the spread of Covid-19 again put a halt on the business, even before it could have taken off.

"Lockdown was a tough period for us. We had poured all our savings into this business. Now we were struggling to keep it going. It was our parents who came to our rescue and helped us to stay afloat," says Azmat.

After the government announced relaxation in the lockdown, “Sarposh” finally reopened and so did the money-counter.

"Sarposh is our own place for authentic Kashmiri food. It's the only place in Bangalore which serves authentic wazwan, Kashmiri breads and brews. Even the organic produce like Saffron, walnuts etc come directly from Kashmiri market."

Azmat calls this place as an experiencing centre as everything over here has been designed while keeping Kashmir in view.

"We try to portray Kashmir through our restaurant. We have incorporated 14 crafts from Kashmir in our restaurant which includes silver work, tilla, ari, clay craft, khatamband, wicker etc.

All the food is cooked in traditional copper cauldrons and utensils while tchot - flat bread gets cooked from Kashmiri tandoor, she remarked.

"It's a mini version of Kashmir in Bangalore. For all the things we use are traditional Kashmiri."

The husband-wife also ventured into the fashion industry and started selling Kashmiri arts and crafts.

"Being Kashmiri we never get a chance to voice ourselves. But I wanted to take control of that narrative now. I wanted to reclaim my space and I chose to do so through food, fashion and crafts."

Whenever a customer visits Sarposh they get acquainted with Kashmiri culture and traditions and also get to read about Kashmir through Azmat's small library.

"Our customer should leave our restaurant with a better understanding of Kashmir, which has always been a motto. People ask us different questions regarding Kashmir and we try our best to answer them all. If nothing at least a conversation has started about Kashmir over here," says Azmat.

Azmat uses authentic Kashmiri species and which she procures from small time local farmers from Kashmir only.

"All our supplies are sourced from Kashmir and we support local businesses only. We have tied up with small time farmers and artisans in the Valley who supply us their produce which we use in our food."

"We want to tell people what real Kashmir is. We want to voice this over to people that Kashmir is beyond tourism."

Azmat's Sarposh has received an overwhelming response from people of Bangalore and the Kashmiris living there.

"People come here to experience the real Kashmiri food and it feels great when they leave while praising."

Azmat calls herself quite lucky to have a bunch of supportive people by her side.

"All the local logistic support is handled by my parents, my husband supports in my business while my in-laws leave no stone unturned to help me stay strong."

While calling Kashmir her inspiration she said, "I'm trying to become a voice of Kashmir as we people are never allowed to talk for ourselves."