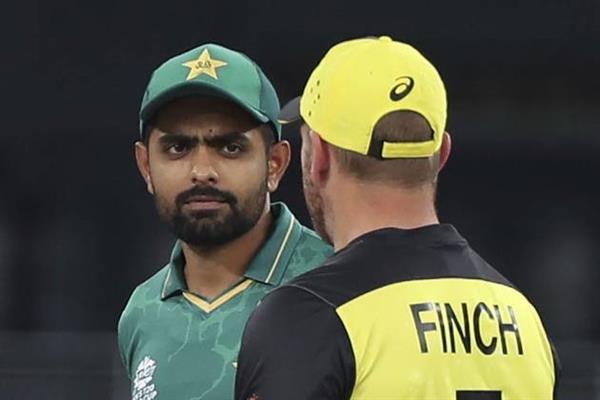 Australia beat Pakistan by 5 wickets and will play final on Sunday against Newzealand. Pakistan scored 176 for the 4 wickets.

In response, Australia lost their skipper on a golden duck as Shaheen Afridi trapped him LBW in the first over. Then, David Warner and Mitchell Marsh rebuilt, stitching half-century stand.
However, the joy was short-lived as Shadab Khan sent Marsh packing on 28 to leave Australia on 57/2 after 7 overs. Then, Steve Smith fell cheaply on five as Shadab's twin strike rocked Australia. But Warner continued on his merry way, smashing 49 before being sent packing by Shadab Khan.
Australia reached 95/4 after 12 overs. Maxwell didn't lst long either as Shadab Khan bagged a fourth and Australia reached 127/5 in 16 overs. All eyes were on their key man, Marcus Stoinis. Pakistan have set Australia a target of 177 in 20 overs. In the first innings, Babar Azam and Mohammad Rizwan got Pakistan off to a dream start in Dubai.
They smashed multiple boundaries, especially Azam, to take the side to 38/0 in 5 overs. Rizwan found his touch soon after as the duo took PAK past 50 inside 7 overs. Eventually, they put on 71 for the 1st wicket before Babar Azam was dismissed by Adam Zampa on the final ball of the 10th over. Mohammad Rizwan and Fakahar Zaman continued the onslaught as they rebuilt quickly to take Pakistan to 117/1 after 15 overs. And Rizwan brought up his 3rd half century of the tournament. A big and a big toss to win for Aaron Finch.
The coin fell in his favour and Australia have elected to bowl first against Babar Azam-led Pakistan in semi final 2 of T20 World Cup 2021. Both sides are unchanged and there are no surprises there.