Asma Farooq Khan, an activist on a mission of immunizing the vulnerable 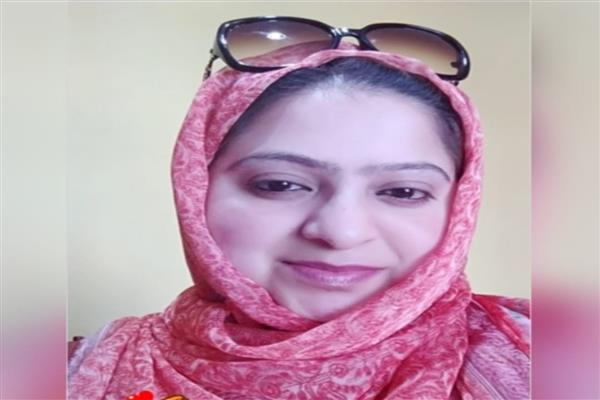 Srinagar, Mar 07: Like an American author and abolitionist, Harriet Beecher Stowe who had said, “A woman’s health is her capital”, Asma Farooq Khan, a social activist too believes that ‘the health of a woman depicts how much entire family is concerned about health maintenance.’ She opines women folk have ignored their health due to family responsibilities. She believes that this can be addressed only with the help of awareness programs.

Asma is working with World Health Organization (WHO) as External Monitor and looks after immunization part among mothers and their children.

After completing her studies in Public Health & Sanitation from Government Medical College (GMC) Srinagar, Asma got associated with WHO and started working in High-Risk Areas (HRA) in Kashmir Valley where the community lacks timely education about immunization.

“High-Risk Areas (HRAs) including brick kilns, slums, migratory populated areas have been her visiting places to ascertain whether immunization by health teams has taken place there.

“Being an External Monitor of WHO I’m trying my level best to reach to the community and vaccinate them at an appropriate time”.

She said the community living in far off areas of the valley is prone to multiple diseases if they won’t get immunization on time. She also said in my official capacity I try to arrange immunization for these people after verifying each and every detail.

Asma added our commitment is to ensure no child or mother would be left out in the immunization process. She also added if the community will not get vaccinated at right time, it creates manifold health issues for them in future.

Hailing from Chanapora, Srinagar Asma maintained that government provides free vaccination to people living in High-Risk Areas as they are unable to purchase vaccination from markets due to financial impediments. “These people are unable to buy vaccines from the market because they are financially not much sound. They are assembling usable goods from the garbage sites”, Asma said and added, “Keeping this in mind, we make ensure their kids and mothers get vaccinated at the proper time”.

Asma had survived tough challenges in her work and vaccinating the vulnerable community who many times exhibited stiff resistance in many ways.

Narrating an episode, Asma said recently she and her team members visited the upper reaches of Tral, in south Kashmir’s Pulwama for immunization. “There was heavy snowfall, the road leading to the destination was fully accumulated, however on way we approached a house to whom we requested for high-knee boots to walk over. After getting high-knee boots, we rushed to forward areas. But surprisingly when we ask the community members to come forward for vaccination, they kept their children and mothers hidden which shocked us”, she said.

She believes the lack of awareness and rumours have been the biggest hurdle in convincing rural people to immunization and other health-related matters.

Asma said the rumour mongers damage the fabric of society without knowing what would be implications on society. She said the community living in far off places or higher reaches are yet uneducated about the benefits of immunization however it can be resolved if massive awareness programs will be carried out among them.

She is however hopeful that the decline in the Covid19 pandemic has paved way for organizing awareness programs related to health issues among mothers, children and other community members who often put their faith in hearsays.

“I am committed to carrying out awareness programs in the coming months. I wish to educate women folk about how to maintain health in odd and even”, she said.

Besides children, women also need guidance about Do’s and Don’ts to make their health hale.

“Our women folk have ignored their health. I believe if a woman is healthy, the entire family is healthy, so any bad impact on her health depicts the negligence of entire family about health maintenance”, Asma told.

She said our women even don’t know when multi-vitamins, iron and calcium need to be taken.

Besides, Asma is also running an NGO herself namely Rural Educational Trust that deals with educational standards to financially weak communities.

The NGO works regarding educational development, awareness programs, post-12th scholarships to poor students, besides counselling of students for futuristic pursuits.

Established in 2008, Asma asserted at least 60 students got benefit from the NGO, Rural Health Educational Trust so far.

“We have tie-up with several professional colleges of Valley and outside. We facilitate those students for professional courses who suffer from financial constraints”, Asma said.

Apart from Valley’s professional colleges, her NGO is facilitating poor student admission in Paramedical and Engineering Colleges to outside J&K which include Chandigarh and Amritsar also.

During the Covid19 pandemic, Asma and her team members worked as Freelancers and were providing PPE kits, sanitisers, facemasks and other anti-Covid19 equipment to working people and the labour class.

“With the help of many institutions and people, we arranged a sizeable number of PPE kits, sanitisers, facemasks and other required material which were distributed in labour class working in industries and other companies in the pandemic era”, she asserted.