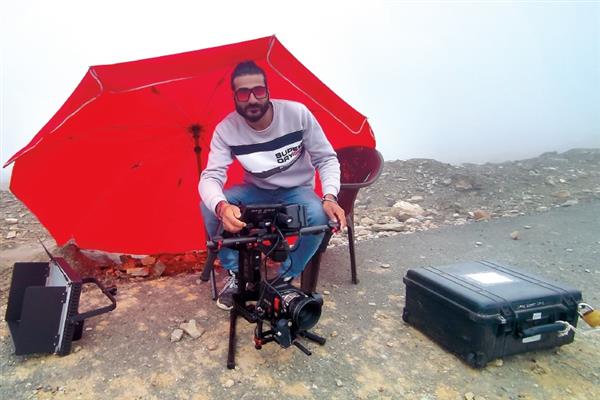 Hailing from Srinagar's Harwan area, Arsalan Manzoor is the youngest Cinematographer from Jammu and Kashmir to be listed by IMDb. Arsalan has worked on more than ten songs as a cinematographer and most of them are industry-level songs produced by Mumbai-based music productions.

Most of the songs that Arsalan has worked as a cinematographer have regularly made headlines for either the sensitive topics that they touched or for the records that they made. Each song has views in millions.

A very hit song titled Salam-E-Wazwan has been received with much fervor in Afghanistan and Baluchistan due to both its tipsy beats and the presence of Persian words. It's pertinent to note here, Persian is the official language of Afghanistan.

Though Arsalan started as a photographer, he went on to develop an interest in cinematography. He has received an award from the 35awards as well, in the capacity of being one of the top 50 lens-men in the world in portrait photography.

Arsalan’s foray into the music industry started when he met Jan Nisar Lone in the year 2016. The first song that they did together was Khuda Meharban. The following break was huge for Arsalan because it was a project with Rajshri Entertainment, a production where the likes of Salman Khan launched his career with movies like Maine Pyar Kiya. The song was directed by Keshav Panneriy, the man who has directed the movies like Jeena Isi ka Naam hai. Having got the opportunity to work with such bigwigs and talented artists, Arsalan fell in love with his work.

In the aftermath of Khuda Meharban, Arsalan’s debut song, he went on to work with AR Music Studios where he filmed the songs like Rubaru, Rouvmut Dildar, Salam-e-Wazwan, and Sona Sona. While Rouvmut Dildar was a heartbreaking song that portrayed the plight of half widows, Salam-E-Wazwan highlighted the delightful nature of Kashmiri cuisine. A couple of years ago, a small video in which Rowdy Afghans were dancing to the tunes of Salam-E-Wazwan went viral and Arsalan became aware of the reach of his work.

“You don’t realize the potential of your work you don’t get the appreciation for. Whenever I see my work making an impression on people or changing their perceptions about certain topics. I take my work both as a profession and social work,” Arsalan said while speaking with Rising Kashmir.

Titled Ronni Matte, Arsalan has himself produced a song as well, and in this, he worked both as director and cinematographer. Written by the Sufi poet Ahad Zargar, the song was composed by the famous music duo Irfan and Bilal.

“When I met Jan Nisar Lone in 2016, I was still trying to make it as a photographer. Following which it became rather easier. But choosing art over a mainstream career comes with lots of struggle. Believe me, if you are trying to make it as an artist, you will have to struggle a lot. I was fortunate to find Jan Nisar Lone and Peer Zahoor who became my big support, but lots of people may not have such opportunity,” Arsalan adds further.

Cinematographers are the backbone of music albums. It’s they who translate the collective emotion of the lyricist, composers, and singers into a visual language. They are depended upon to contribute and complement the emotion with visual language.

Arsalan’s father was a cameraperson in DD Kashmir and somehow his visual craft trickled down into Arsalan. Arsalan believes that camera-art is in their blood now.  Arsalan’s father proved to be his first tutor and he instilled a passion for visual art in him.

“Growing up, I would fiddle with my father’s camera, and eventually, when I developed the passion for it, he took it upon himself to tutor me,” Arsalan said, adding “Until 2014, I was tutored by my father. He taught him how to use both DSLR and film camera. Later on, with all his teachings with me, I went on to use the famed Red Camera and other cinema-grade equipment while shooting for the songs. It would not have been possible without my father’s teachings.”

After sifting through different streams and colleges, Arsalan finally realized that it was rather fair that he answered the calling of the lens. He then received formal training and did a one-year diploma in photography and videography. He also did many courses from the Film and Television Institute of India to hone his skill.

Now, Arsalan is planning to give classes to the youth in cinematography as well. He says that there is a lack of platform for youth in the valley and a scarcity of world-class training institutes.

“There is not a single platform in the valley, in terms of lens-art, which has a substantial standard that can meet the world requirement, so I want to contribute and fill the gap by tutoring and mentoring the beginners,” Arsalan comments.

Arsalan says that artists in Kashmir have to struggle a lot and many seek money in it. Arsalan himself is against seeking money in art. He says when people seek art money, the art suffers.

Arsalan makes a valid point, but when there is not much money in the art, art suffers, because then lots of artists are not able to dedicate themselves to art due to lack of monetary support in life.

Nevertheless, despite an eminent surety of struggle, Arsalan tells the youngsters to do what they want to do if their calling is art, “don’t let the pressure affect you,” he tells them.

In a message to the budding artist, Arsalan asks them to keep their patience and not to let their negative thoughts and self-doubt bring them down.