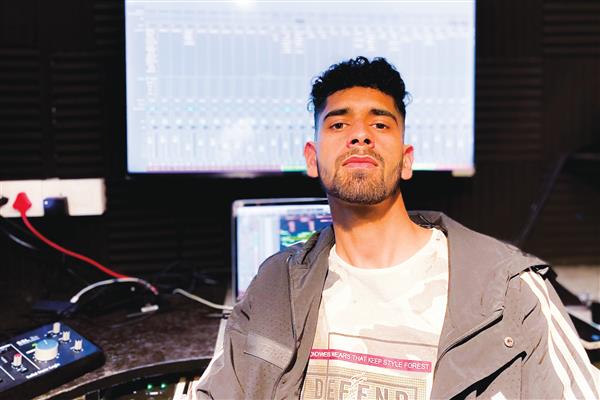 From a few years, a collection of new songs released by various artists of Kashmir have not only won the hearts of audiences but has also contributed to the music sphere of Kashmir.

From North Kashmir’s Bandipora district, Arif Mir has been the audio engineer of many of these songs. 23 years old Arif of Rakhi Hajin, started audio engineering and fixing audio with his own songs when he was 17.

He has done the audio engineering for almost all the hit songs sung by the Kashmiri artists, which include Lolan, Jingle, MBA, One Side Up, One Side Downand and several other songs.

Having learnt all the audio mixing from YouTube, he considers AR Rehman as his greatest inspiration. “If I am a sound technician today, it is because of Rahman, sir. It was only after hearing his songs on cassettes that I developed an ear for sound.Every time I heard his sound, it was incredible and pulled me in towards this field, "he says.

The songs for which he has worked were also released on Zee Music, Aazadi Records, and local platforms.

‘Lolan’ was his first song, which gave him name and fame, and he spent nearly five years working on it.This song was written by his father, Ghulam Mohammed Mir, who runs a medical shop in Hajin Locality.

The song was produced by RJ Umar Nisar and Danish Tak. Both producers got in touch with the audio engineer after watching his videos on YouTube.

“They approached me to fix the audio in this song. Because audio is the only thing that is difficult and not everyone is capable of doing the same. Within a short time offinishing this project, the people's response was overwhelming,” he said.

The huge response from people encouraged him and within no time, opportunities started finding the way to Arif.

“I am still spending the whole night preparing the music. And I am glad to learn this on my own because there was no one who could teach me music engineering. What I have learned so far, I have learned from YouTube, and I am continuously learning new and modern things,” he said.

Mir set up a makeshift studio in a single room on his home's patio. He thinks the trust of the artists is the best thing that he has created. Despite not having any professional set-up or a degree in the field of audio engineering, the artists have been showing faith in his work.

“Some artists gave me their album the moment I put up a temporary studio. It was Down Town - the first hit record I created in the studio. When musicians heard the recordings, they began requesting me to record their music,” he said.

He has done his schooling in his home town of - Hajin and later moved to Srinagar, where he is pursuing a Bachelor in Computer Applications (BCA) from Cluster University. Apart from possessing skills of audio engineering, he has been principal Tabla player.

“I didn't study Tabla and Piano instead, I followed my love. My passion was the only thing that kept me going. I didn't resist what creativity was putting me into, even though I wanted to get into music composition," he explains.

Talking about the common notion of getting a government job to earn livelihood, he said, “In Kashmir, people are running after government jobs, and no one is willing to identify their creative side and try to make their livelihood in other ways.”

For most people, making a career in the world of music is still alien. Arif had to face the same resentment initially from the people around but he believed that with passion and hardwork, one can create a space and earn his livelihood.

“When I first started doing audio engineering, some people told me that I was wasting my time but God had a better plan for me. By doing this work, I am earning a handsome amount. And I am pretty hopeful that the more time I devote to it, the more I will earn,” he said.

Currently, he receives full support from his family and is learning new skills to make himself better which will further advance him in his career.

He said, “All I need to do now is invest time in learning new skills. I have worked hard on these songs. It took me weeks to complete the projects. At present, I am not facing any issues with my work.”

Having high faith that one day his struggles and hardwork will pay off and he will get an opportunity to work with the top music organizations in the country, he said “When I started this audio engineering, I didn't know the ABC of this, but I was dedicated towards this thing that I would become a reputed audio engineer in the future.”

He believes there are thousands of opportunities available in the market and one can earn his livelihood easily, but needs dedication and patience.

“Parents spend a huge amount of money on their children’s education and to make them doctors and engineers but there are very few people who think beyond these professions,” he said.

Talking about music production, he said that audio engineers play a crucial role. A work in audio engineering impacts each part of the music industry, from capturing live sound to mixing music recordings to managing the technical aspects of audio equipment.

“A music producer's major duty is to provide artistic direction for a recording session, but an audio engineer's role is substantially different. Audio engineers can also be producers, but they must first grasp the principles of audio creation,” he said.

While concluding he said, “In every field, people are facing problems, and most of them give up early, which is not good. If people will give everything to their passion, they will get good results sooner or later.