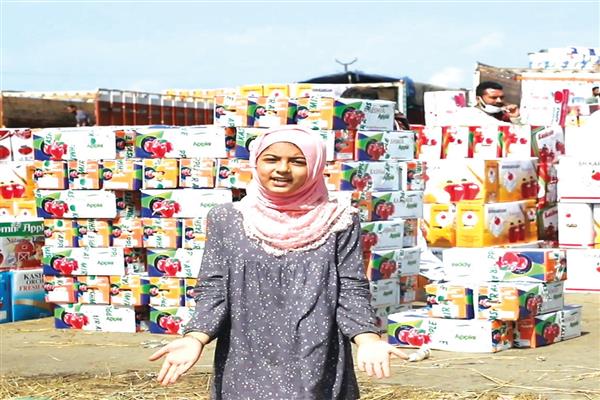 A 10-year-old girl from Sopore in north Kashmir’s Baramulla district is fascinating people from all over the Kashmir by her interesting videos that she uploads on social media platforms. She is the youngest social media influencer of Kashmir.

From chillan Kalan videos to social issues, Aksa Masrat uploads her videos on social media platforms by the name "What Aqsa Says". Her talent and voice have also managed to bridge the generation gap.

Speaking to Rising Kashmir, Aqsa said, "I have been very inquisitive from my early childhood. I was just 6 years old when I made my first video on ‘Chillai Kalan’ in which I described what Chillai Kallan is.”

When Kashmir was under grip of cold wave, Aqsa decided to make a video on Chillai Kallan so that children of her age would love it and, at the same time, they would be able to relate it to a real-life situation.

“For my first random video, there was an unexpected response from the public. I was encouraged to make more such videos, not just to pass on the video but also to make the world aware of something that remains behind the curtains,” she said.

Besides making videos on day-to-day issues, Aqsa is also highlighting the issues of her area on her social media. She has produced videos that depict the cultivation and harvesting process too. The work of the teen influencer is being loved by people widely.

When she started making the content, she was aware that she would face the problems. “To come out of this, I availed myself of all the options available; family support, and most importantly, my teachers, who helped me through all this.”

Being a child, it was not easy for me to be vocal. Because girls here are being caged with concepts of how to become a doctor, engineer, and teacher. Aqsa was fortunate to have her mother and maternal uncle who stood by her.

The budding influencer is currently studying in 5th standard at Shah Rasool Memorial Welkin School in Sopore. She aspires to become an IAS officer. Her hobbies are exploring new things.

She is managing both her studies as well as her content creation at the same time. When asked how she was managing both, she replied, "It is a tiresome thing to balance the things.Usually, I remain focused on my studies, and when i get some leisure time, I switch to making videos.”

Her videos are always eye-catching, and some of her videos have gained more than seventy thousand likes, while others have had around 8 lakh views.

Aqsa’s video on dog terror has also attracted a huge viewership. In this video, she plays the role of a journalist and is highlighting issues faced by people, especially elderly people, and informs about the dog menace in her hometown Sopore.

The way she has presented herself in reporting on the issue, no one can believe she is a 10-year-old girl.

In her most recent video, she takes us to a tour of the Sopore Chankan bridge while discussing the topics.

She is inspired by her maternal uncle, Nasir Kachroo, who is an international photographer whose work has been published by top media houses such as Aljazeera, National Geographic Traveler, and several others.

"There are many people around me who have inspired me in one or the other way. My Mamu, an international photojournalist, was an inspiration to me when it came to making videos,” she said.

Aqsa is certainly a multi-talented and imaginative teenager. She is someone who has developed a thriving empire on social media and is ruling like a queen.

According to her maternal uncle, Aqsa is truly blessed with a plethora of creativity and talent, which has helped her capture the hearts of tens of thousands of people across Kashmir.

She has over 39 thousand followers on her Facebook page ‘What Aqsa Says’. Through her page she keeps her followers up-to-date on what she is up to and how shefeels. She believes that social media is the most effective way to reach out to a young audience and guide them in the right direction.

She believes in a practical attitude to life, which is becoming increasingly unusual in today's materialistic environment.