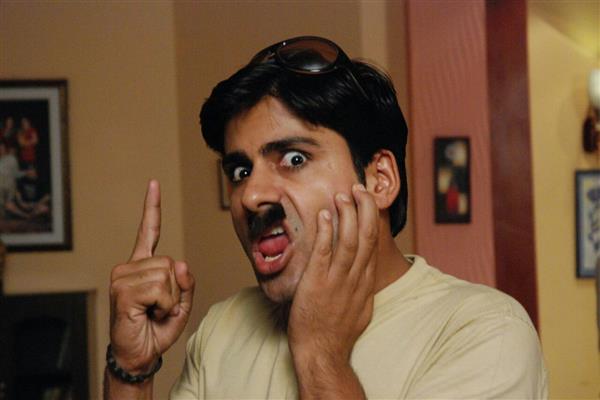 Over the past several years, Anil Koul Chingari, a comedian from south Kashmir continues to be among favorite stand-up comedians due to his unique skills for which he has become a household name.

Born and brought up in Uttersoo Shangus village of south Kashmir’s Anantnag district,  Chingari was inclined towards comedy and at a young age, he used to imitate relatives and friends who would often visit his home.

At the age of 9, he started acting in Jammu-based theatres which became training schools for young artists. He used to perform mimicry programs in schools and colleges which would invite large audiences, which boosted his confidence.

“After developing my interest in acting, I worked hard and started attending theatre workshops. Abinav Theater in Jammu acted as the best platform for young artists, where I continued to follow my passion,” he says.

Chingari says many historical plays were staged in Abhinav Theatre under prominent directions. “It also helped us to revive our lost culture and gained a great deal of contemporary flavor.”

He completed his early schooling at Kendriya Vidyalaya Jammu and pursued Bachelor of Engineering from the Government College of Engineering and Technology, Jammu.

After that, he worked in a private company. Chingari later shifted to the entertainment industry where he played leading roles that gave him love and fame.

Apart from stage and theatre, he also performed in Doordarshan, DD Kashir, national television shows like ‘Thank You Jijaji’ which was premiered in 2009 on SAB TV, the series was produced by India’s comedy king Jaspal Bhatti.

“Then, I worked in Mata ki Chowki series aired on Sahara One from 2008 to 2011. I also appeared on other platforms including Sony Tv, PTC and Karan Johar's chat show and other stand-ups shows,” Chingari says.

Recalling his days with Jaspal Bhatti, Chingari says he learned many techniques from him and Bhatti told him that comedy is best to pass a message to the public.

Chingari is an approved artist at public broadcaster Prasar Bharti and Doordarshan. At Radio Sharda 90.4 FM Jammu, his popular entertainment program ‘Wagan Waej" in which he played the role of ‘Kakin Jiger" (Boba) character.

After returning back to Kashmir, Chingari said people in the valley face stress and depression which motivated him to start serving people.

“A few years back, in a communal harmony match between Kashmiri Muslims and Pandits in Kulgam, my friend Sandeep Raina introduced me to the players, they insisted me to perform mimicry of some local politicians,” he says.

“I performed mimicry for some minutes. Its video went viral on social media. After that, I didn’t look back and people appreciated me,” says Chingari.

The veteran comedian presents comedy on problems of the country while the people feel connected to him because of his unique style in local language.

Chingari has performed in various comedy stand-up shows, including Koshur Kalakar, at various places across India.

He has also bagged first position in the laughter competition held at Katra, in which artists from various parts of India participated.

Chingari had also performed stand-up comedy in other states and countries including UAE, Canada, and the USA in the Kashmiri language.

“I want to promote and preserve the Kashmiri language. It is our identity. We should teach our children and encourage them talk in Kashmiri,” he says.

“Those engineers, doctors, actors, and talented administrators who are living outside Kashmir should return to their roots and serve their own people. They use their talent in foreign countries but forget their roots,” he says.

Chingari has performed his shows in multiple languages including Kashmiri, Hindi, Punjabi, Dogri, and Bhojpuri. “Later, I opted for my mother tongue and performed most of my programs in Kashmiri language as it is close to my heart,” he says.

Most of his videos that were uploaded on YouTube have been shared widely by his well-wishers. Chingari speaks mostly in Islamabad (Anantnag) ascent of Kashmiri language, which attracts people from all corners.

“I get a good response from my own people. I hope they enjoy my videos. I suggest them to work for the community and spread love,” he says.

Most of his videos are of Kashmiri comedy. Chingari says, “If one can bring a smile on someone’s face it is a big contribution of his life.”

“I want to contribute to my mother tongue and safeguard it,” says Chingari.

“I believe people in Kashmir never hurt anybody. I want prosperity and there are existing problems but we should try to avoid negativity. We all should have a positive attitude to live our life,” he says.

Chingari aims to become a change agent for people with the help of his comedy videos as he says people have seen a lot of sufferings.

“My thoughts can’t change society but if only one person is influenced that is enough and that will give me relief. I am very passionate to promote my culture and language. We all should work for it,” he said.

Reacting to rise in young artists over the years performing on social media, he says most of such videos are not scripted though these are shared widely.

“Training is important for every artist. There is a need for a proper script and dialogue, short composition, suspense, punch and other vital components. Anyone having a YouTube channel makes no sense until there is professionalism,” he said.

The noted comedian says youth who are interested should get training first and work hard on script and observation which attracts people.

“When there is a good script, we can produce good dramas and movies. It takes a lot of time to be a competitive comedian,” he says.

Chingari says, although there is no dearth of talent in the valley’s new generation but they need to polish their ideas and seek the guidance of professionals.

“Guidance is important. There are always ups and downs behind the success of everyone, but one should move forward and work hard,” he said.

His father passed away when he was just three years old but he didn’t lose courage and continued to work hard amid difficult situations at home.

“Amid all odds, my mother along with my three siblings gave us education. My mother is an inspiration and my support. While my elder brother Chand Ji Koul also helped me during my career and supported my ideas always, ” Chingari says.

"Besides, My wife always extended her support to me, she kept me encouraging till I achieved the feat," Koul said adding, “What I am today, is because of her support and trust. Till end of my life she will remain my inspiration and I would like to express my gratitude to her," Koul said.

“I want to revive Kashmiri culture. My message to aspiring artists is never lose hope and keep doing good work.  There are three things behind the success of an artist: observation, imagination with a concentration on imagination, and observation.”

“We should promote real comedy and not vulgarity which is being aimed to spread hatred among different communities. Humanity is above all religions and there is no space for creed, color, and discrimination,” he says.