An Aquaphobe who became swimming champion 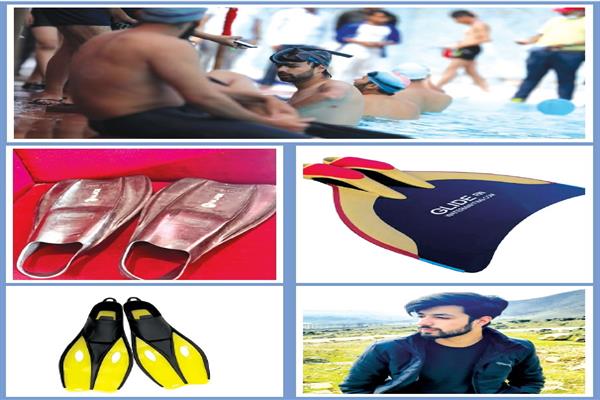 Mahir Tariq Gilkar would never go close to water bodies out of fear of drowning but listening about young boys drowning in water bodies in the valley kept him disturbed which eventually prompted him to learn swimming. He was aquaphobic since his childhood.

“Listening about rising drowning cases in valley prompted me to learn swimming in which my coach Riyaz Wani played important role in overcoming this phobia,” Gilkar said.

After learning swimming, he eventually developed interest in underwater swimming and with time he became the champion.

He bagged a gold medal in bi-fin underwater sports, played at Haryana, by setting a national record in 50 meters bi-fin swimming in just 22 seconds.

He has done life-saving and pool techniques courses in swimming at the National Institute of Water Sports (NIWAS), Goa, which is run under the aegis of the Government of India.

“Monofin (similar to fishtail) is a type of fish’s tail by which we do underwater swimming. The monofin is worn on both the feet simultaneously, whereas bi fin is two padded sandals which are worn on feet separately,” Gilkar said.

“We also use a snorkel, a plastic pipe which helps in breathing underwater whose outer part remains out of the water.We also wear a special mask which stops water from entering into eyes and nose while playing this sport,” he said.

Gilkar was Aqua phobic since his childhood. He would never enter into the water out of fear of drowning but he eventually overcame this phobia by learning to swim.

After getting daily exposure to water, he developed an interest in swimming till he became a national monofin and bi-fin swimmer.

“Initially, I was very scared of water, even a little exposure or thinking of going into the water would give me Goosebumps,” he says.

He says he got inspired by his coach, Riyaz Wani, who trained him while letting him use a life jacket initially.

“After practice for several days, I realised the stamina, potential in me for this sport, thus started learning swimming professionally,” he says.

He claims that under coach Riyaz Wani’s coaching, around 300 to 400 children learn swimming every year. Sometimes I even assist him in teaching newcomers in learning swimming.Apart from that he has specialization in fin swimming, the underwater sport.

It has been five years since Gilkar started taking part in national underwater sports championships.

“I played my first national in 2017 at Haryana where I also set a record by covering a distance of 50 meters in just 22 seconds in bi fin swimming, and bagged the gold medal.Besides I also stood third in 100 meters Monofin swimming and bagged bronze medal,” he says.

So far, Gilkar has played five nationals and has bagged several medals every year which include three gold, one silver, and one bronze medal.

“I was selected for the world championship scheduled to be held at Egypt which was postponed owing to a spike in Covid-19 cases,” he says, adding that he could not participate this year owing to medical reasons as doctors had suggested him to refrain from entering into the water.

He was also selected for the Asian championship which was scheduled to be held in China in 2019.Owing to lockdown and communication gag post-August 5 2019 when the central government scrapped the special status of the erstwhile state of Jammu and Kashmir, he could not participate in the Championship.

He added , after that, they could not contact their national coach Kuldeep Patil , thus could not  participate Asian championship.

Talking about his daily practice schedule he says that he practices daily mornings at Nigeen Lake particularly in summers.“I am also helping Coach Riyaz in organizing 50-100 meters mono swimming events,” he says.

He says his family remained very supportive of him and always financed him in this entire journey.

He says that he face difficulties in practicing as there is a lack of a proper and adequate number of swimming pools in the valley.

“Although there are some small swimming pools at some places where we cannot practice owing to their smaller size and depth, those pools do not serve the purpose of proper practicing,” he says.

He added that even in the current place where they practice in the summer season, Nigeen Lake also lacks proper lining facilities.

“We lack Olympic size swimming pools, which include the appropriate distance of 50-400 meters,” he says.

“I usually get selected for various championships but the biggest obstacle I face is lack of government support, otherwise I am forced to bear all expenses on my own which is not possible for me every time,” he adds.

“The Underwater sport is a wonderful sport, it is in its developmental phase in the valley but I believe there is a brighter future in this sport,” he says, adding once you show your interest in it you can go far ahead in this sport.

He said that the government of India is mulling to include it in the Olympics. And children should learn this sport.

“I am working hard to get selected in the world championship, if not at least for the Asian championship,” he says, adding that they bear all expenses of their own as no one has sponsored them to date.

Gilkar says that he provids free coaching to children who are interested in swimming.

“We welcome every child to learn swimming under our supervision besides we even provide our equipment to trainee swimmers without charging any fees for that,” he says.

Talking about the advantage of monofin and bi-fin swimming over other types of swimming, he says that one can gain enormous speed in underwater swimming which is not possible in over-water swimming forms like butterfly style, reverse style, and freestyle swimming.

“Monofin and bi fin can increase speed by four times than other forms of swimming as mono or bi fins help one to cover more distance in lesser time as compared to normal swims by giving a more push to the swimmer,” he claims.