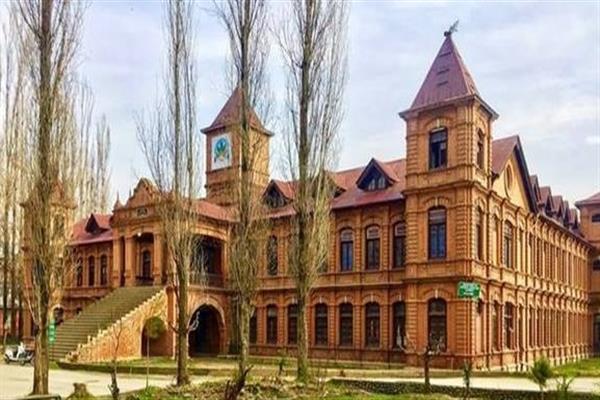 Established in 1913, Amar Singh College is known for its glory and heritage. Recognized with the prestigious Award of Merit in the 2020 UNESCO Asia-Pacific Awards for Cultural Heritage Conservation, the architect of the heritage building belonged to the British era. Also, the heritage building has paintings and murals depicting Chinese civilization and culture.

For its fine architecture, the college has been a shooting spot for many Bollywood movies. Some scenes of Aamir Khan Productions’ Lal Singh Chaddha were shot there recently. Some years ago, scenes of a love movie, Laila Majnu were also shot in the college.

Amar Singh College started with the technical institution, where masonry, carpentry and electrician’s trainings were imparted to the students.

F.H.Andrews, formerly Headmaster of Battersea Polytechnic School, London was appointed as its first Principal in 1913.

Presently designated as a heritage building, the first building of the college was constructed during the time span of 1913-1920. The college had withstood the floods of 2014 and the massive earthquake of 2005 which caused serious damages to the building.

The repairs and renovation of this heritage building was carried out under the financial support of the higher education department through INTACH which brought the building back to its glory and charm.

In 1942, the college started functioning as a degree college with humanities as its main subjects. As time passed, the numbers of courses were added to the curriculum. Earlier, it was the feeding area for the students of district Budgam which at the time had no college of its own. Presently, the college witnesses huge rush from the students of all the districts.

With time, new blocks were constructed until the college got affiliated with the Cluster University as School of Liberal Arts and Humanities.

Principal of the college, Bashir Ahmad Rather said it is his responsibility to make the college the best one in the valley. “I have the biggest role to play as a principal of this prestigious college, I have to take this college to another level. The green, polythene free, ragging-free campus is open for everyone who wants to excel in their field.”

The principal said that students studying at the college are thousands in number and girls contribute to more than 50%. “It’s the efforts of my best of the best teaching and non-teaching staff that I can proudly call myself the principal of this institute,” he said.

In the coming time, Innovation Invention Incubation Technology Center (IIITC) is coming up at Amar Singh College in collaboration with TATA Consultancy.

“Our college has been identified and it is in proposal. It’s a proud moment for all of us. There are many things to be done in the coming time,” he said.

Apart from this, there are new proposed courses like post-graduation in Gender Science, B.Sc. in data Sciences etc. Amar Singh College is the only college that has entrance-based admission in all the courses.

New courses like Media studies have started this year and the response of students is also good, the principal said.

Dr. Mujahid Ahmad, Head of Department Geography, has been serving the institution for years. Earlier, professor Mujahid worked in the college as Ad-hoc lecturer for 7 years. Since 2003, he has worked as a lecturer and has recently been appointed as HOD.

He said, “Due to the flash floods of 2014, college had suffered huge losses. Many records were damaged. The library which possessed centuries old books was also damaged. Computer lab and laboratory suffered losses but we didn’t stop. We revived again.”

Getting affiliated with Cluster University, had added some 5-year Integrated courses and Honors courses.

“Many students from our department are in good positions and have achieved huge success. 4 of our students have become assistant professors and are working with us. It gives immense joy and pleasure when we see our students touching skies,” he added.

Working from the past 10 years, Mujeeb Ahmad Kawoosa, Presently Head of Department Mathematics said that the department of Mathematics of Kashmir University started from the Amar Singh College. Then in 1969, it was shifted to the university campus.

He said, “The College has never lost charm. With many colleges coming up in the valley, the number of students in our college has always remained good. Our students have excelled in the field of academics as well as sports. It’s a proud moment for a teacher when he sees his students doing well in every field.”

“When we compare Amar Singh College with other colleges, we think we have a good number of Math students.  With new colleges coming up in the valley, the number of students is good,” said Mujeeb.

The teachers of various departments said that scores of the luminaries have been the product of this prestigious institute. Haseeb Drabu, Amitabh Mattoo, Fahad Tak, Justice Mansoor Ahmad Mir, Baseer Ahmad Khan and Muneer Ahmad Khan are some of the alumni of Amar Singh College.

An alumnus of the college, Professor Shamim Ahmad Shah who Heads Geography and Disaster Management Department at University of Kashmir said the institution has groomed him and had made a big contribution in his life.

“We didn’t have much exposure. Whatever time we spent in college was a precious time. The teachers were cordial and cooperative and I had good relations with teachers of other departments as well,” he said.

Talking about one of his teachers, MK Kak, he said, “MK Kak taught me for some months but I was so impressed with him that when he moved to Delhi, I searched for his address there. He came back to Srinagar after 25 years and I accompanied him. Only because of Amar Singh College I came to know him and I am still connected with him. The institution has a rich legacy.”

For a cyclist Mohammad Akbar Khan, the college means more than an institution. Akbar had secured first prize in inter college champion for three consecutive years. Watching his talent and passion, teachers of the college came forward to help him financially.

He said, “Many teachers came forward and helped me financially. Professor Mashooq got me sponsorship from J&K Bank to buy an expensive cycle. I got huge support from teachers. They helped me academically too as I used to be busy with cycling practice.”

Akbar is now pursuing Ph.D in physical education and has received many awards and medals at national level. He said, “I used to do cycling earlier too but the college provided me with a platform. That became the turning point of my life.”