Aasif is known for hitting the ball out of the park. This helped him to grab the attention of big names including Parvez Rasool. 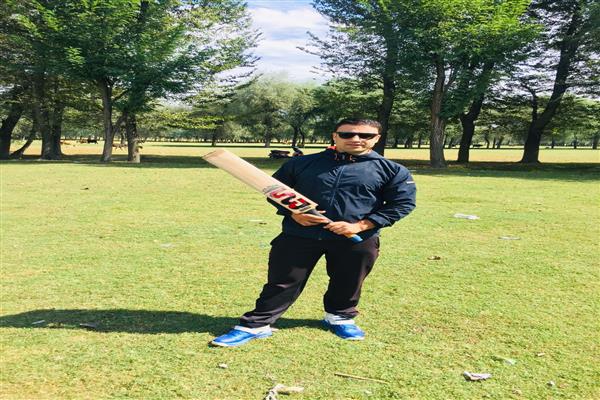 A young cricketer who has scored 12 centuries, 41 fifties and has in his name more than 150 wickets in a calendar year in different local leagues is now eyeing to get a place in Ranji Trophy. Tabraize Ahmad Mughal, 26, nicknamed as Aasif Mughal from the Nussu area in Qazigund town is aiming to see his name among professional cricketers.

Aasif started playing cricket since childhood.  “I was in 6th class when I  played a leather ball match in my native village which ended with a positive impact,” he told Rising Kashmir.
Next year in his 7th grade, he joined Loins Anantnag Club and a year later represented the district as a batting all-rounder.
Aasif is known for hitting the ball out of the park. This helped him to grab the attention of big names including Parvez Rasool. “In a cricket match played in Anantnag, I smashed a hundred in just 27 balls, and Parvez watched from the dugout,” he said.
After that match, he got a chance to play in the known league of Kashmir, Downtown Champions League (DCL 2015 edition) under the command of Parvez. He was also selected for the Dubai league, which he couldn’t join due to the 2016 unrest. Aasif has bagged dozens of Man of The Match/Series awards in many local league tournaments.
His family has been too kind to him and has supported him at every level all these years. “My family, relatives, friends and many others have supported me in my journey so far,” he added.
He has attended practice camp to major events like, Ranji, Syed Mushtaq Ali and Vijay Hazare but each time failed to grab the interest of Chief Selectors at JKCA.
“I built a cement turf to practice and improve my skills, and am also helping the local youth towards sports” he said.
Seeing his performance, a known sports factory owner in Anantnag has come up with sponsorship to facilitate this young and budding cricketer. “Bhat Sports Sangam (BSS) contacted me and is sponsoring my cricket equipment and other things,” he added.
“My passion for cricket will never die. I will continue to play cricket as a profession and will continue my efforts to get better with each passing day. I am quite hopeful that selectors will surely be impressed with my performance,” he said.