Acting for Wetlands: Challenges and Opportunities

In today's modern life, the biggest threat to human life is from climate change and in such a situation it becomes necessary that we conserve our biodiversity 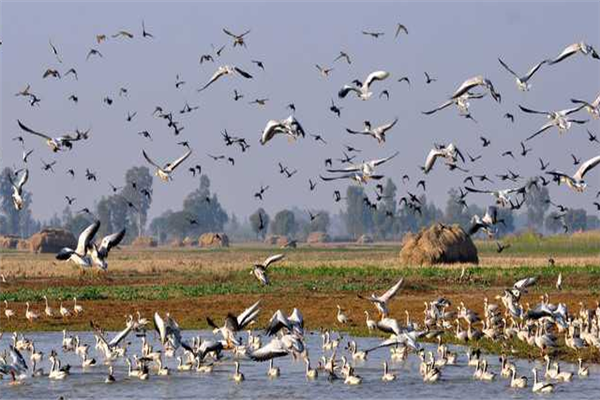 There is long story of the evolution of living beings and the essence of this story is that not only do we have the right of living on this planet earth, but millions of species existing in its different parts also have the same right over it as we do. We get fascinated by the variety of plants and animals found in rivers, lakes, seas, forests and mountains. When rich biodiversity is seen in both water and on land, then the thing to think about is that the place where aquatic and terrestrial biodiversity meets, how rich will it be in terms of biodiversity? There are more than 1758 wetlands sites of international importance in the world.

Wetlands are one of the most important biodiversity ecosystems on the planet. In addition to providing shelter for a wide range of animals and plants, they provide the food needed by almost half of the world's population and as a balancing act in different parts of the world. Over the past century, about half of the world's wetlands have been destroyed due to drainage and land supply for construction and agriculture. Illegal fishing, hunting and pollution caused by population growth are also serious threats to life on this planet.

The definition of wetlands under the Ramsar Convention includes marshlands, floodplains, rivers and lakes, mangroves, coral reefs, and other marine areas not deeper than 6 m at low tide, as well as man-made wetlands such as waste-water. Treatment ponds and reservoirs are also included in this.

Since the 1960s, the world communities had realized the importance of wetlands and various measures and meetings were taken to protect this ecosystem. Finally, in February 1970, a meeting was held in Ramsar(Iran). The meeting was organized by the efforts of the father of Iran's environment and the then head of the Environment Organization, Mr. Eskandar Firooz. As a result of this meeting, the world's oldest environmental protection treaty was ratified and the Ramsar Convention was named in honor of this meeting. The Ramsar Convention is in fact an international treaty that provides a framework and structures for national action and international cooperation to protect and properly use wetlands and their resources.

Currently, 171 countries have acceded to the Ramsar Convention to protect wetlands. Today, 2375 wetlands are known worldwide as Ramsar Wetlands and many efforts are being made to protect them.Iran, as the founder of this international convention, is a member of the Ramsar Convention, and currently 25 of Iran's wetlands have been registered worldwide.

If we compare the biosphere with the human body, then the "swamp" can be called its kidneys, which perform storage, biological, geochemical, hydrological, climate and gas control functions. Wetland systems are of great importance for maintaining the stability of ecosystems and preserving the biological diversity of the plant species that grow in them.  Due to the meeting place of aquatic and terrestrial biodiversity, there is a rich ecosystem of wetland due to the abundance of wildlife species and flora. In today's modern life, the biggest threat to human life is from climate change and in such a situation it becomes necessary that we conserve our biodiversity. More than 40 percent of species live in wetlands and get nutrition through them.

Wetlands are providing a natural source of water supply by feeding groundwater resources. They also help prevent water pollution by preventing the ingress of saline water as well as removing sediments and toxins. Coastal wetlands that form along the coast are a great help in preventing coastal erosion. In addition, wetlands are home to a variety of migratory and native birds and have a positive impact on the environment. In addition, wetlands can be used as a water transport platform or a natural tourist destination for domestic tours or incoming tours.

In today's world, due to rampant development, environment is also being harmed. Modern development has caused most damage to our environment and wetlands. Sewage from factories, mining and over-exploitation of groundwater are some of the human causes that have caused extensive damage to wetlands. Along with this, due to natural reasons like rise in sea level, climate change, storm etc., wetlands are also losing their original form.

Wetlands Scenario in Jammu and Kashmir

The valley has been bestowed with abundance of freshwater sources from north to south Kashmir & east to west along with its beautiful surroundings of green mountains. There are thousands of unidentified wetlands located in the valley. They give shelter to thousands of bird species, fish species and other beneficial organisms. In draught prone areas they act as source of irrigation to the fields, drinking water to the domestic and wild animals. These water bodies need to be identified as people are illegally converting these pure water bodies into wastelands.   The natural wetlands and lakes that add to the beauty of Jammu and Kashmir have declined by 50%. Natural lakes and wetlands in Jammu and Kashmir have been damaged to an alarming extent due to illegal construction and pollution. According to some reports, there are a total of 3651 small and large wetlands in Jammu and Kashmir, of which five wetlands are of international repute. In Srinagar, larger portion of the water bodies and natural lakes have been depleted and the area of water bird sanctuaries in Srinagar city has decreased over the years. The natural watersheds in the vicinity of Srinagar city, including Dal Lake, Khushalsar, Baba Demb, ShalBug, Anchar, HokarSar and NarKara watersheds have been converted into residential colonies.

Ministry of Environment, Forest and Climate Change has prepared a four-pronged strategy for the restoration of wetlands that includes: basic data preparation, wetland health card making, Listing of wetlands and preparation of targeted integrated management plans. In the year 2011, the Government of India has issued the notification of the Wetlands Protection and Management Act 2010. 90% of the world's disasters are water-related and it affects 60% of people living in coastal areas due to floods or tsunamis. The wetland acts as a natural and efficient carbon sink. For example, swamp moss covers only 3% of the land, but it has the capacity to absorb twice as much carbon as all the forests in the world. Wetlands act as a buffer against climate-related disasters, thereby avoiding the sudden effects of climate change.

The lotus, which is one of the most beautiful flowers in the world as well as the national flower of India, grows in wetlands. Wetlands provide shelter to many such flora and fauna around them which are helpful in economic development. Wetlands represent a diverse ecosystem. All the major civilizations of the world have settled near water sources.  The livelihood of the people living near the wetlands is largely dependent on them directly or indirectly. Wetlands are the source of firewood, fruits, vegetation, and nutritious fodder. Wetlands provide an important range of environmental, social and economic services.

(The writer can be reached at: mir886dmh@gmail.com)