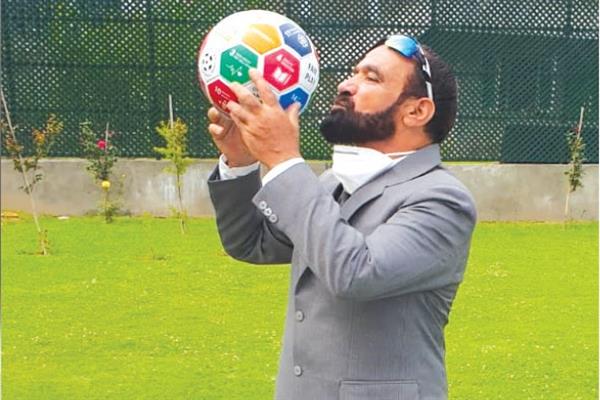 There are many sports players in Kashmir who have made their name at the national and international level and have inspired youth to take path of sports.

Among them is Abdul Majeed Kakroo, the first Kashmiri footballer who represented India in1984 Asian Cup. In 2021, he received lifetime achievement award by Governor of Jammu and Kashmir Manoj Sinha.

Born in Koker Bazar area of Srinagar, Kakroo,despite all odds, became the first football player from Kashmir to represent the national team and later becoming captain at the Nehru Cup in 1987.He has played 95 international football matches in his career.

Kakroo who currently works with Power Development Corporation (PDC) as a coach, has so far trained hundreds of footballers in Jammu and Kashmir and outside as well. He is known for his training skills among footballers.

From childhood, he was interested in football. He received education up to 8th class only at a local government school in Koker Bazar. He said, he along with friends used to play football once the market and shops would close in the late evening hours in the locality.

“When I was a kid, I used to collect papers and stuff them into polythene bag to make a ball. We also didn’t have shoes then. We kept hurting our legs but we didn’t care,” he said.

Son of a vegetable vendor, Kakroo said, when Srinagar city used to fall asleep in the early 1970s as the clock struck 12, he along with his companions used to play football under the only street light in the city centre.

Kakroo had made over 30 appearances for national team and has a memory of all his major ones. But nothing has transcended the memory of his 12 O’clock show in the city’s lanes.

He didn’t stop practicing hard and did everything possible to make it to the team. He said after his eight goals in three matches in the Santosh Trophy the same year, Kakroo became a part of the Indian team and remained there constantly for 10 years.

But the man who went on to play for two of India’s greatest football clubs, Mohan Bagan and East Bengal, started his footballing career by kicking a crumpled ball of papers. Kakroo, a retired Indian footballer from Kashmir played as a striker. He represented India at the 1984 Asian Cup.

Notably, one of the stands at the TRC Turf Ground Srinagar has been named after him by Real Kashmir FC and it was a great achievement for him.

While taking about the role of TRC ground in promotion of football in the valley, he said if the ground would not have been there the Real Kashmir Team would not have emerged.

“It is the only place in Kashmir where football players get an opportunity. Real Kashmir FC showed tremendous resilience to pull off a stunning 2-1 win over a spirited Sreenidi Deccan FC and lift their second successive IFA Shield title recently which was only possible as they had already participated and were trained at the TRC ground,” he said.

Kakroo signed his first professional contract in 1977 with Road Transport Cooperation (RTC). He was paid a salary of Rs.180 per month. He helped RTC reach the quarterfinals of the Durand Cup where they lost to JCT.

He also represented Jammu and Kashmir in the Santosh Trophy tournament. He later went on to play and became one of the highest-paid footballers in the country.

After impressing in Durand Cup in 1979-80, he was called up to the National Team camp. He wasn't selected for the final team and was told to improve his game with the left foot.

He scored goals against China and Malaysia in the 1983 President's Cup. He played a total of 30 matches with the National team.

He said there are many opportunities in football but that needs commitment, hard work and dedication to succeed in football. “In any sports like football, the players not only make their name but also make their families and the nation proud,” he said.

Kakroo said it was with the help of TRC ground that matches were played even in sub-zero temperature in harsh winter months in Kashmir. “Earlier, we would to stop playing football in early September and October and would again start in April and May,” he said.

He said many professional teams emerged only after TRC ground became a reality.

He said, earlier, there was more excitement among people and there was more fan following. “Once I won a football match in Lal Chowk stadium. When I came back to my home by foot there were hundreds of people waiting for my arrival,” he said.

He said the government must come forward and help footballers by way of organizing more and more events and provide funds for the same.

Kakroo said many women football players from Kashmir are also participating in tournaments and recently a women's team from Srinagar also participated in Assam.

“Some six years back, I also sent my daughter to take part in the women's team. She was the team captain then and played two nationals at Pondicherry and Uttarakhand. Women can also take part in football,” he said.

The 60-year-old player said that youth who are interested in football should come forward saying that there are opportunities and career options available in football.

“Many football players have worked hard and have made a name at the national and international level which is a moment of pride for Kashmir. The future of football is very broad. Many local footballers are currently participating in junior, sub-junior, under 17, under 19, under 21 at many places across India,” he said.