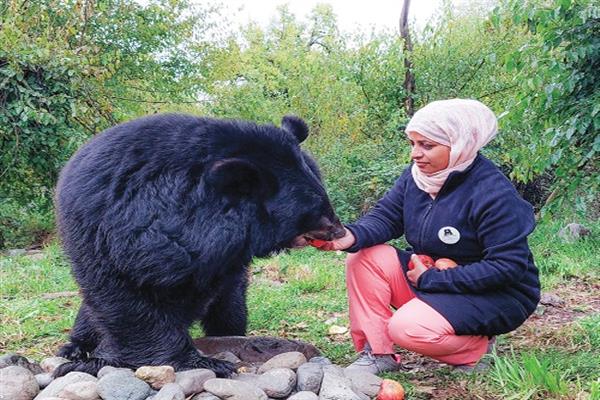 Aaliya Mir, a resident of Bagh-i-mehtaab Srinagar, has become the talk of the town for her mission of saving wild animals and birds by trekking and climbing to different places in Kashmir.

A former Mathematics teacher, Aaliya has won many hearts for her treatment to these creatures.Her husband, a wildlife veterinarian, was thrilled with her interest. To a great extent, his passion for wildlife influenced her to devote her energy to wildlife conservation.

Aaliya became a Wildlife SOS volunteer in 2002 when she was in Delhi. She joined as a staff member and began working for Kashmir’s wildlife welfare. Today, after almost 15 years of unwavering efforts and service with the organization, she serves as Project Manager and Education Officer for Wildlife SOS. Additionally, she leads the organization’s conservation program in Jammu and Kashmir.

Mother of two children, the 42-year-old woman has so far rescued scores of wild animals which include reptiles, birds, raptors, small mammals and has been part of several bear and leopard rescues.

In 2007, Aaliya rescued snakes from the residences of former chief ministers of Jammu and Kashmir Omar Abdullah and Mehbooba Mufti in Srinagar.

A few years ago, she was able to rescue two bear cubs separated from their mother at Srinagar’s famous Botanical Garden.She along with her team tried to unite them with their mother but could not do so. Ultimately, she and her team shifted them to Dachigam National Park and kept feeding them milk until they became adult. The bear cubs are still there.

Recently, she rescued a snake from a school in Budgam where the students had been frightened by the presence of snake in a building.

“When I visited there, the snake was in the school building and I rescued it.  Then I made them understand about the snakes and their importance in the ecosystem,” she said.

Similarly, she has also rescued a snake trapped in a two-wheeler and another snake at Computer Lab of Government Degree College, Awantipora.

Aaliya, the only female wild animal rescuer in Kashmir, said every rescue is important for her and she feels good when she rescues an animal which also gives her peace of mind.

“I am proud to do this work. I get an opportunity to save one life which is very important. I am very fortunate to do this work. Every rescue is special to me because at the end, I save life of an animal or bird. I feel very happy for that,” she said.

After completing her graduation, Aaliya did some courses in wildlife, wild animal handling, care and management and how to rescue them in different situations.

Apart from being a rescuer, she also conducts research on wildlife. She works and supervises research projects which are undergoing in Kashmir on brown bears and black bears. She said there is no research about brown bear available in the valley.

Aaliya is project head of Wildlife SOS (non-profit organization), which has signed MoU with the Jammu and Kashmir Wild Life Department. Both jointly work for the mitigation of man-animal conflict for which it conducts different activities in several areas.

“We work for the capacity building of frontline staff who head during rescuing animals, mob management and other related aspects,” she said.

On the other side, she also conducts programs in schools, colleges, villages, communities in order to generate awareness among people and students.

“We inform them about wild animals and how they should behave with them. We also inform students about wildlife and what kind of species are there,” she said.

“Animals are unique and an intricate part of this world. We need them more than they need us. They are an important link in our ecological system and their presence helps us sustain this balance. I always incorporate this message in my awareness workshops. I am pained when I even see cut down trees,” she said.

Aaliya said every day there are reports of man-animal conflict and many people have been killed and injured by animals across Kashmir.

“We want to limit and mitigate the man-animal conflict. We go to people to tell them how to deal with it and how to be at safer side. We also aware them about animal behaviour, how to save themselves and what precautions should be taken,” she said.

Aaliya and her team not only work to rescue wild animals but also rehabilitate and care them at bear centres of Dachigam and Pahalgam which are headed by her.

Today, Wildlife SOS is taking care of six black bears and two brown bears at the two centres under the guidance of Aaliya. The bears, among other animals at the reserve, have been rescued from human-wildlife conflict situations.

“We work for bear management, bear care, care of birds. We also take care of their sanitation and food. I also go there and give them food,” she said.

Many schools, as part of picnics, visit the bear centres. Aaliya provides students with on-spot awareness and informs them about behaviour of animals and their importance on earth.

“We also do live animal demonstrations about different species of animals. Students have many myths about wild animals and we try to clear their confusion,” she said.

The role of wildlife conservationists and rescuers, such as Aaliya, is increasingly becoming important in the wake of frequent human-animal conflicts in Kashmir.

The man-animal conflict in J&K arises from interactions with these animals like bears, leopards, porcupines, snakes and lately wolves, and wild boars, Aaliya observes. Besides this, habitat destruction and change in land use patterns are the other factors.

Aaliya said if people want to get rid-off from man-animal conflict, the first thing to do is plant trees, increase forest cover.

“Only when a forest is healthy and the prey base for wild animals is intact, we can expect conflict to reduce. Wild animals really don’t prefer to enter human settlements, but a lack of resources in their native habitat forces them to do so. If their home is healthy and secure, we will see less of them in our homes,” she said.

People have to be optimistic about the conservation of wildlife in Kashmir, Aaliya said. “I hope that the younger generation understands the importance of wildlife and want to conserve it. They ask very good questions about wildlife and are always keen to learn how to play their bit in conserving wildlife.”