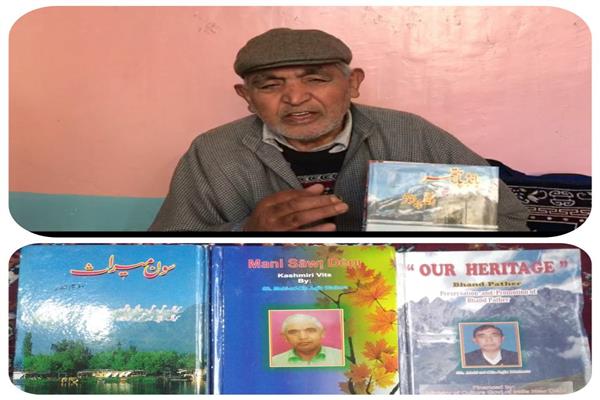 “Noted historians of Kashmir, Kalhana and Abdhinav Gupta has also mentioned about Bhand Pather. Advisories and orders from the authorities were narrated to people through this art,” he said.

Aajiz, an author of seven books on the popular folk art of Kashmir, says it is a form of traditional Kashmiri theatre that is passed down not just through families but through entire villages in the region.

He says his upcoming book Folk Tales of Kashmir performances is under process and is expected to be published this year.

Aajiz, who is also president of Bhand-e Pather amalgamation, has been associated with the art for the past 55 years. He says due to government’s negligence the century old folk art is on steady decline in the Valley.

“The bhand actors are skill-fully roped in the play and they enact contemporary religious, social and political issues into prevalent stories. These actors used to train themselves to be skillful in acting, dancing, acrobat, and music,” he says.

The elderly artist says he has performed in all states of country and he feels that his greatest achievement is that he has garnered praise everywhere.

“Bandh Pather is as old as Kashmir history. It was a mirror in society when there was no media. It spread awareness and highlighted social issues,” he said.

Aajiz says the characters in Bhand Pather in their performances would criticise the rulers and stressed for the betterment of society.

“What makes our folk theatre different from the others is that a single artist acts, dances and plays music. It doesn’t involve backstage sound or recorded music like any other theatre. Everything an artist performs is live before the audience,” he says.

Aajiz says stories are narrated in such a manner that every performance has something fresh to offer for audiences.

He says now it has lost its vigour and dramatic impact. There are still small groups of Bhands, clinging to their tattered costumes in a few villages including Wathoora.

The artist says Bhand Pather spoke against feudalism, autocracy, child marriage and other social evils through seven traditional theatre forms including 'Gosain Pather', which highlighted highhandedness of religious heads and their hegemony.

“In past, Bhand Pather was only medium of entertainment for people. It used to highlight problems of public and pass them to the government,” he says.

Before 1947, the local artists associated with this art were getting paid allowances by the government to support their families and keep the art form alive.

He says then local villagers used to give in return rice and domestic foods during harvest season. After the arrival of cinema, radio, and digital media, the focus of the government and people shifted away from this theatre.

Aajiz who had been awarded a senior fellowship by the Ministry of Culture, says Bhand Pather was mentioned by Kashmiri Sufi Saint, Sheikh Noor-Ud-Din Noorani (RA) in his verses and also by Sir Walter Lawrence in his travel book.

“Many researchers from India and foreign countries are working on Bhand Pather and take help from me for their work,” he says.

He learned from his grandfather and father, Mohammad Sidiq Lolpora and is associated with it for the past 55 years. He recalled the time when on Eid, artists used to travel to villages, cities and perform plays in happiness and joy.

“People were so fond of us that they would wait eagerly for us to perform. Earlier, Bandh Pather was an important part of marriage ceremonies as well. No bride or groom would get ready to marry without us. Every day, we had to perform. We had such an important position in the society,” he says.

Besides playing Surnai and Dhol, Aajiz acted as a comedian in many plays.

Bandh Pather was a source of entertainment those days as people used to gather in open space in huge number to enjoy their dramas and get entertained.

“People used to stay healthy too back then because they would get entertainment in pure form,” he says.

Having performed in other parts of India, he says people would give them good response. “People wouldn’t care about anything and would come to watch our plays,” he says.

The themes were mostly associated with people’s suffering and concerns about the education system, drug menace, corruption, peace, and prosperity etc.

These themes came in a form of theatrical productions in Bhand Pather style and were staged in twenty different places of Kashmir for huge crowds openly.

Folk media is an effective means of communication in today’s world since it not only helps to connect people with their cultures but also revives lost cultures.

For many artists, traditional media is a medium of expression for the common man, and a way to vent out his feelings.

Along with mainstream media, even traditional folk media must be encouraged so that our grassroots are as strong as the class on top of the pyramid.

About the future of Bhand Pather in Kashmir, Aajiz says the government should wake up and take concrete measures to revive the centuries-old theater in Kashmir.

“Over the years, the financial assistance from the government has been minimal. Even the promised grant for 50 registered Bhand theatres has been stopped,so has the pension of Rs 2,500 for the elderly artists,” he said.

Aajiz says, although the union government is doing their part as they have decided to give scholarships to help revive this art form but nothing substantiate is done.

Due to financial constraints and non-availability of funds, Bhands of Kashmir have been driven towards poverty which cannot even help them to make their livelihood.

He says the government should grant special pension benefits to veteran artists who kept alive Bhand Pather and performed it on all levels.