Muslims refer to the water of Zamzam as something revered and unique. They crave this mysterious liquid and love to drink it whenever they can 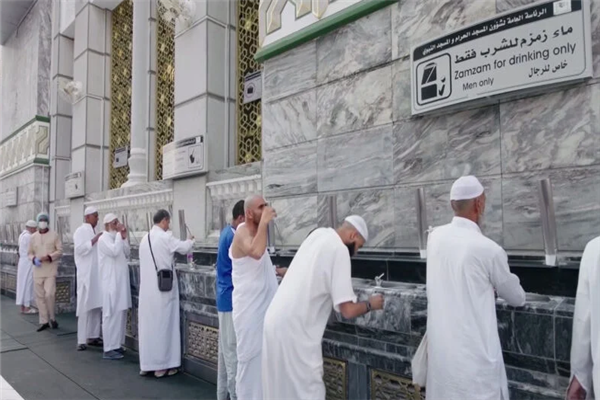 Allah (SWT) has made all living creatures out of water. People require water for almost everything; for agriculture, construction, transportation, and for cooling and heating. But not all water carries the same value and significance. Muslims refer to the water of Zamzam as something revered and unique. They crave this mysterious liquid and love to drink it whenever they can. And for those who managed to go to the Haj or Umrah, they return home carrying it for thousands of miles as a prized possession and to give as special gift to their friends and families.

Zamzam is a blessed water body, which quenches thirsting people across the globe, especially the Haji who travel to Mecca and Madina for Haj. Zamzam water is known for its purity, cooling & refreshing nature, and quench thirsty features. One of the most astonishing features of the Holy city Makkah is the Zamzam Well located within the Masjid Al Haram,in Saudi Arabia, a mere 20 metres east of the Holy Kaaba. It is when Hazrat Ibrahim’s (AS) infant son, Hazrat Ishmael (AS), and his mother Hajar (AS), who were left stranded in the desert, thirsty and tired, when a source of miraculous water sprang up at their feet to satiate them. This became known as Zamzam Water.There is nothing ordinary about it. The miracle of how it came to being in the middle of the desert, its consistency throughout thousands of years, its beneficial qualities, the fact that it never dries up makes this water a special one.

The fact is, this small 30 meter deep well is far away from any other source or body of water. It is self-replenishing. It is constantly replenishing itself in order to produce nearly 20 litres/second of water in a second and gallons upon gallons of water for consumption of thirsty pilgrims plus the additional amount that is bottled and also the amount that is taken as gifts distributed worldwide to millions. Zamzam well was excavated by hand, and is about 30 metres deep and 1.08 to 2.66 metres in diameter and started 4000 yrs ago. Zamzam water has scientifically been proven to possess healing qualities due to its higher content of calcium and magnesium salts and also the natural fluorides that encompass a germicidal action. It is a natural alkaline water that has never been chemically preserved, treated, or chlorinated and the pH value ranges from 7.9 to 8.

The main health benefits of this sacred water include:-

Enhances energy levels in our cells

The head of the largest medical center in Munich, German scientist Dr. Knut Pfeiffer, has long been studying the effects and benefits of Zamzam Water. One of his most fascinating theories was that the water increases energy levels and strengthens the cell systems of the human body, which he was able to prove with plenty of research and countless trials. It is considered that drinking Zamzam water increases the immunity of the body.

Contains no germs or bacteria

According to Dr. Yahya Koshak, and following a series of tests using ultraviolet tech through Europe and Saudi Arabia, Zamzam Water was found to be completely free of germs and bacteria.

Known for its purity

With a perfect bicarbonate amounts higher than the total found in water , Zamzam Water is commonly known to be the purest on the planet because of its containing of adequate amount of bicarbonates (366mg/l), which is even higher from the French Alps water (bicarbonates-357mg/l). Zamzam water has no colour or smell but a distinct taste.

Rich in Calcium and Magnesium

Zamzam Water has been scientifically proven to contain very high levels of Calcium and Magnesium, which can help decrease fatigue and make bones strong.

Encourages the growth of healthy bones

Because of Zamzam Water’s abundance of Calcium, the water positively affects the human body, especially the bones as they absorb the vitamins and benefit from them for better growth. Zamzam water has scientifically been proven to possess healing qualities due to its higher content of calcium and magnesium salts and also the natural fluorides that encompass a germicidal action.

Drinking Zamzam water is encouraged among pregnant ladies who might experience fatigue during their pregnancy. It also reportedly enhanced the body’s metabolism.

Best water on the earth

The Prophet Mohammad (PBUH) said that the best water on the earth is Zamzam water. According to Prophet it is just like food and has the power to cure sickness.

Regular intake of this amazing liquid helps to nourish the body and may also increase your body weight.

Applying this water over your eyes helps to brighten the eyesight. Washing eyes with this Holy water is also helpful to cure many eye-related disorders.

The water is alkaline in nature, which neutralizes the excess acid formed in the stomach thus beneficial for hyperacidity and heartburn.

The well of Zamzam is now 4000 years old. Despite the fact that the Zamzam well is incredibly old, no biological growth such as algal blooms or fungal particles is present in it, which is a unique property of this Holy water.

Aquaporins, also called water channels, are pores in the membrane of biological cells, mainly facilitating the transport of water between cells. Zamzam water has the capability of stimulating aquaporins and thus enhances the regulation of water between cells – making it incredibly healthy for us to drink.

Zamzam water causes the upregulation of gap junctional intercellular messages and connexin 43 antibodies in the endometrium. In addition, Zamzam also stimulates the development of implantation windows through the stimulus of Aquaporins because it has high contents of fluorides, contributing to its solid antimicrobial action. Zamzam water, therefore, acts as an antioxidant as it stimulates endometrial nitric oxide.

On behalf of all these properties, there is no doubt Zamzam water is a gift from Allah (SWt) to us – as it has all the properties that normal water doesn’t contain. The Prophet (PBAH) said that Zamzam water is a nourishing food and not just water. It is blessed by Allah and is said to be a cure for all illnesses.

Ibn Abbas (RA) reports that when the Prophet (SAW) drank Zamzam he said the following prayer: “O Allah, grant me beneficial knowledge, abundant sustenance and a cure from all diseases.”