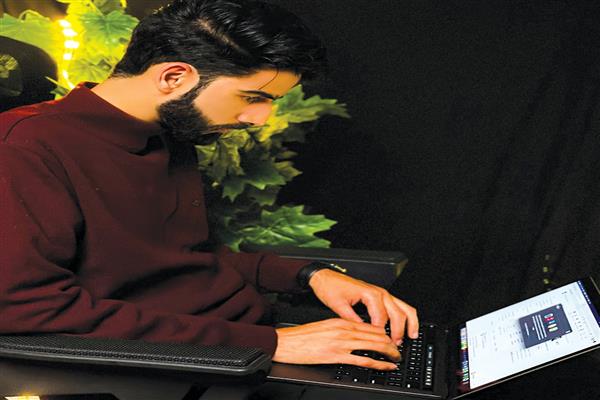 When Rubaitul Azad couldn’t pass his 10th class examination, he considered it the end to his career but little did he know that his knowledge and skills in the field of Information Technology will take him forward.

26 years old, Azad is a freelance web developer and graphic designer from Gulshan Nagar Bye pass area of Srinagar. Designing modern websites, apps and providing all kinds of web services, he is known for creating digital products that his clients love and praise him for.

Having done 300 plus projects with reputed international, national and local brands, the self-taught tech-savvy builds digital products and offers web services for start-ups, enterprises, healthcare companies, education and other sectors.

Being an IT enthusiast from the beginning, he was often scolded and judged for spending all his time with the laptop but he would often look for ways to make use of the internet in a productive way.

“People told me that you are going to ruin your life and not going to make a living with all this. I learnt designing and coding through online video lectures. I still do this because I am keeping myself updated, learning and growing each day,” he said.

In 2012, he started freelancing online. The response he received for his skills from the clients was good which led him to make use of social media for promoting his work and in no time, he got a good number of followers.

“With time, I upgraded my set of skills and learnt website development, UI/UX designing, WordPress development, Server administration, Search Engine Optimization, Social Media Marketing, Mobile App Development and few more techniques. Initially there were many confusions and fear within me but today I am having my own client pool,” he said.

After years of career in freelancing, in 2017, he joined a Srinagar based IT company as Web and UX/UI designer and continued freelancing as well.He also started conducting courses regarding freelancing and use of social media to earn.

“I conducted zoom classes and recently I have completed two batches. I have trained more than 200 students who have joined freelancing in different fields. From the previous batch, I have also taught five students who were from humble backgrounds, free of cost,” he added. “During the short term course, various skills regarding portfolio building are being taught.”

In 2017, he also started making his space in the international market as well and is currently doing projects internationally.

He has done projects with a number of online business services and freelance marketplace like gigzoe as official blog development professional. Also, he has worked with a number of international brands like KTP Exports Private Limited Singapore, Shanghai Uniforms Singapore, Kinpin TV and some companies based in Dubai and many in India.

“Some of my designs have also been used by renowned industries like News18, Hindustan Times, Yahoo, ABP News, MSN Business and more than 100 other outlets,” he added.

Believing that the concept of freelancing is still alien to many people in Kashmir, his mission is to kickstart the Gig Economy here and create awareness among masses.

He said that in the Gig Economy, various companies hire independent workers and freelancers instead of full-time employees and the employees while sitting at home can earn a good amount.

While talking about his observation, he said that during Covid 19 pandemic, various companies cut down their staff, rendering employees jobless which made many people to opt for freelancing.

“Freelancing allows you to work online and earn a good amount of money. You can work from anywhere,all you need is a laptop and an internet connection. I have recently started a YouTube channel. I sensitize people about my job. I also write about my job on my blog so that people will also get inspired,” he said.

As no age criterion is required in the field of freelancing, he said that kids of aged 11 and 12 are coming up to learn the skills.

“You don’t need to have any special talent for it, you only need to choose your field like content writer or any other online related fields,” he added.

He further said that there has been a shift in working pattern and youth of Kashmir needs to gear up. “Here work is often associated with getting dressed in the morning and going to the office but outside Kashmir, there is a trend of hiring freelancers. The scope of the Gig economy has jumped up high during Covid times. Many e-commerce portals started coming up and Gig Economy is actually proving good for people provided one works hard and invests their time in producing good results,” he said.

Stressing more on learning new skills for improving one’s profile, he said that one has to be updated with the various trends.

“Instead of searching for jobs, one should go for skill development courses. Companies don’t ask for degrees and grades. They want experienced and skilled people. Even the beginners get to earn good in freelancing,” he said.

Shunning the popular opinion regarding government jobs, he said that people who chase government jobs should also be updated with the recent trends happening around the world. He said, “People in Kashmir think if you have a government job, only then your future is secure but if one explores other fields, there are jobs and opportunities as well.”

Talking about the problems faced by the youth currently he said, “Unemployment is a grave issue. The companies usually pay less to freshers and most of them don’t take up jobs for such meager salary which has added to the problem and frustration among youth. A normal person, who spends 5-6 hours in a day on social media, can invest his time in building his online portfolio and can open up the door of opportunities.”

Initially Azad had to face a lot of criticism from his parents and relatives but now his parents feel proud of him. He has also set up a studio at his home which is his workplace and where he spends most of his time. Apart from work, his interest lies in hiking and exploring new places.

Recalling the past time in school, he said that in class 8th, he was banned from the computer lab for creating a hacking technique for LAN systems. “I came to know it’s wrong and then I stopped doing it. I knew much about computers from the beginning but the difference is what better you can do with it,” he said.

He continued his studies and also pursued a diploma in Computer Science. Believing that the colleges need to change their curriculum and switch to the practical mode of teaching students, he said, “In colleges, things are not taught practically. More focus is laid on theory and it’s only for taking a certificate. There should be more practical based classes and the infrastructure should be good too.”

While giving a message to youth he said, “In terms of technology, we have to improve and be trendy. World of IT is very dynamic. Within 10 years, there will be revolution in technology. The rest of the world is way more forward and some of us are still wasting our time on useless things.”