A self learned actor’s journey to big screen 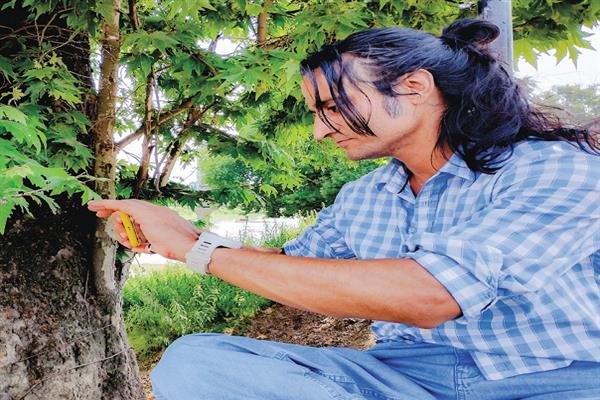 Born and brought up in Srinagar, Tufail Rigoo, an actor, writer and speaker had a tremendous fascination for cricket in his teenage years. Most of his acquaintances would picture him as a finest cricketer but his interest in the theatre landed him in the film and advertisement industry and won him appraises as well.

Hailing from Chotta Bazar area of Srinagar, his journey in the field of acting started during college days when he used to take part in various cultural activities and perform at Tagore hall and SKICC. While representing a theatre group in Jammu, he met Barry John, British-Indian theatre actor and attended many workshops to further hone his acting skills. The plays that he has participated in were directed by MK Raina and written by Moti Lal Khemu.

Having a knack for acting, he thought of making a move to try his luck for the big screen. In 2008, he visited various places in Delhi and Mumbai to check the scenario before he could jump in the field.

“Nobody taught me acting but my energy level appealed to me that I can make it. I started giving auditions, interacting with people and exploring the big city,” he said.

Initially he started anchoring for some shows which provided him an opportunity to get in touch with the prominent people of the industry.

After some time, he started getting opportunities to appear in solo and montage ad films. Having shared the screen with famous personalities like Akshay Kumar, Katrina Kaif, and Sharman Joshi he said that he has appeared in almost 20-25 ad films.

“Havels, Kingfisher, Titan Raga, ThinkPink were some of the ad films I worked on. It was a good feeling to encounter a camera. The ad film with Akshay Kumar got me good visibility and it was on air for almost a year. The Indian Premier League was also underway so it used to flash every hour during the day and soon after that I did an ad film for Titan Raga watches with Katrina Kaif,” he added.

He also participated in ramp shows and did hair modeling as well but soon he discontinued as he was more inclined towards creating things where he could express himself more.

Soon he got a call to appear on the big screen and got to play diverse roles in movies like Mohenjo Daro, I Love New Year, Dedh Ishqiya etc.

“When I got a call for Mohenjo Daro team, on the same day, I signed a contract with Aushotosh Gowariker’s production house and this was undoubtedly a big leap for me,” he said.

The movie- I Love New Year starring Kangana Ranaut by T-series Production had an interesting role for him and he continued running in the industry, making a name for himself.

He also played a role in Abhishek Chaubey’s Dedh Ishqiya starring Naseerudin Shah and Arshad Warsi, Madhuri Dixit and Huma Qureshi. He also worked in Tanhaji - The Unsung Warrior which was declared a blockbuster at the box office.

“Last year, I did a show, Shit Yaar and played a negative character in it. I was also a part of a movie called Sirf Money which will be released soon,” he added.

Talking about his roles in the movies, he said that he has played interesting roles and has never looked at roles as negative or positive.

“I would like to play sort of what joker has to offer or I won’t mind working in a pirate or vampire show and I would like to play a role of clinical psychologist and won’t mind playing a psychopath as well. Whatever comes your way, you need to give your 100%. This is more to do with how you express yourself in a certain way. I have enjoyed what I have done so far,” he said.

Simultaneously he worked with corporate to support his career in the industry. “I worked with Wipro in the field of Disaster Management. Then I worked with some multinational companies also. Overall I had a good time in Mumbai and it provided me with a good platform,” he said.

Talking about the tough times faced by him, he said that his struggles have been more cerebral than physical. “It was more about what is going in the head than about what is going outside of you. I have written certain concepts which I wanted to share with certain people but it has been delayed and these things can put you off,” he said adding, “Kashmiris are warm hearted and our instinct is to trust people quickly. Also we have a lack of guidance in terms of cinema so we have to do things on your own.”

For a number of years, the Kashmiri youth are making their place in the film industry but a large section of people still show their reservation towards working in an entertainment industry. Commenting on the matter, he said that every state has its own culture and when someone goes beyond that realm of regular routine, it is going to raise eyebrows, which is normal and one has to be ready for that.

He said, “Evolution is the order of the day and when you have to evolve you need to be ready for certain questions as well. There will always be challenges but the thing is how you deal with that. You need to have nerves of steel. I believe that passion and sincerity is the basic requirement. Making a lot of money and fame is not a collective setup. You need to see what is good for you and these are also the challenges that one has to face.”

He further said that unless the vernacular film industry is created, people will show resistance towards such things.

“We need to have our own industry here and the films should be made in the local language so that people can accept. Why do we have to watch films and movies in Hindi and English all the time? Why can’t we have a movie in Kashmiri? Do we have people who can present Kashmir in a good way? I don’t think so. Many amazing filmmakers across the world make movies in their local languages and people watch them because it no longer becomes a shock for them. These films are streaming across India,” he explained.

He further said that he is getting into independent film making and has written down a few scripts as well.

Praising Kashmir’s rich folk music, he said that artists need to be promoted.“You can’t get information about Kashmiri personalities even on Google. We don’t exist at all. Like South India and UP has a huge film industry, we need to have our own film industry too. Kashmir has a huge humor talent. People are very comical. They are like legends of the game and you pan a camera on them and that’s a film in itself. I too want to do something for the locals of Kashmir,” he said.

Believing that poetry is a subtle way of expressing intense thoughts, he has planned to start poem jamming in Mumbai and Kashmir. Making short movies on universal issues like mental health and climate change are also in his list.

He further said that fair chance should be given to all the artists to work and present their ideas.

“Common person should get the access. How can we grow if we don’t open the market for everyone where people can have social get together, create a think tank and promote that idea? Nobody is going to come and change that about us,” he said.

He said that he can shuttle between two cities and can simultaneously contribute to both. “Mumbai has provided me the platform and it’s my second home. For Kashmir I would certainly want to contribute in whatever way I can. To do good things, you need to have a support system. We need to create and build the platforms,” he added.

While concluding with the message for youth, he said, “Follow your heart. Follow your gut unless you come across someone who teaches you acting as a craft. Even though everyone is a born actor, you need to learn the craft as well and for that you need some people to guide you. There is a lot of stuff available on social media. At least one can practice the art.”