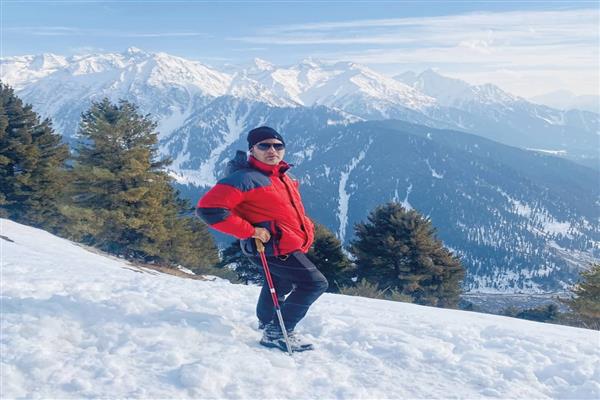 During the times of 2014 floods, when the whole valley was submerged, Adil Kareem Sheikh along with a group of volunteers went to save a family in Anantnag. The family was stranded in a house with ground floor submerged from all sides, and the family was looking for help from the second story of their house.

The gushing water and the height frightened the volunteers as well but Adil tied the rope from one house to another and got the people out. At last a new born baby of 4 months was to be taken out. Adil held the baby in his arms. Suddenly the baby slipped and was about to fall in the roaring water but Adil got hold of his leg and saved the baby from falling.

The brave act was recorded in a video by his friend who was told by another person, “the rescuer won’t survive and you will regret afterwards for shooting the video.”

The moment was something which terrified him but his bravery and gratefulness to his lord never failed him.

Hailing from Malakhnag, Anantnag, Adil said, “I was also scared but I did it by the grace of Almighty. We lost much of our essential rescuing items at the spot but we were thankful that the family was saved.”

40 years old, Adil has been here and there to provide a helping hand to people. From donating blood to fighting against de-addiction, he has been actively involved for the betterment and welfare of people.

Since early years of his childhood, he has been voluntarily doing social work individually as well as in various groups who work in different districts. Most of his work revolves in and around South Kashmir but he never misses a call from another district.

At the age of 8, he joined a local trust which works intensely for the needy, orphans, widows and people of low income strata. “There are around 472 families in Anantnag who are provided financial support monthly through a trust who I am a member of. We have another unit called Educare where orphans or poor meritorious kids are provided support. We provide them with laptops and other things so that they can pursue their studies.”

To the specially abled students in Anantnag, the trust has provided smartphones and braille.

“In Srinagar as well, I am the executive member of the school for specially abled where 90% of special students are taught free of cost,” he added.

He has been a part of the blood donor groups and every 3 months he donates blood. “I donate blood for the sake of mankind. It’s a good thing and everyone should do it to save precious lives. There is no harm in donating blood. Whenever I get the news that blood is required, I reach there to donate blood.Till now i have donated more than 22 pints of blood,” he said.

Keeping focus on improving the lives of youth, he has rehabilitated 18 drug addicts. Among them, some have quit drugs successfully and are living a normal life.

Apart from social work, he is into consumer business. He said that from the past 26 years, he has been associated with social work and has never taken the money for the work.

“I do it for soul satisfaction. There is nothing satisfying than helping people and being nice and kind to them. I, along with other groups work to make Allah happy. We want others to get inspired by the noble work we do,” he added.

Having a belief that religion teaches us to help people beyond caste and creed, he said that during the time of 2014 floods, he has helped the stranded Amarnath devotees in which he also suffered some injuries.

He was awarded by Jammu and Kashmir Police and Sakhawat Center for his bravery and contribution towards society but has not accepted any award so far.

“This is my responsibility and the reward should come from my lord. We don’t help people for the awards and appreciation,” he added.

During Covid Pandemic, he along with his team worked to provide relief kits to quarantine centers. A team of three members went to different centers in Anantnag and other areas to provide essentials to the inmates.

“We are human beings. We have emotions and feelings and I can’t bear to see another person in pain. Our religion teaches us to help people and that is what I am doing. When you get into something and if the situation demands you to cover 1000 kilometers, you will go and work,” he said.

During winters, he and his team monitor the Banihal road. The drivers of the stranded vehicles at the road are provided food and other essentials.

In the times of heavy snow fall, the attendants in the Maternity Hospital and GMC Anantnag are provided food. “The vehicles don’t work at that time so we take the food on cart or on the shoulders and reach out to attendants in the hospitals,” he said.

In the previous year, a group including him namely Lahad took an initiative of performing last rites of the dead who are poor or destitute.

“Some of the people are poor and are not even able to afford the last rites of their loved ones, we get it done for them. This includes beggars, outsiders and also new born babies,” he said.

“The club has well trained mountaineers and my teacher Ishfaq Ahmad has taught me trekking. Adventure is important and it comes with a lot of risks. When I did rappelling for the first time, I was scared and cried but thankfully there is no fear now. The Almighty gives strength to people who think good about others,” he said.

He further said that the environmental issues are the biggest concern and there is a lot more to be done in the future. “The water bodies have been polluted a lot. Our team will be spending all day in the process of cleaning. We will be cleaning the springs because Anantnag is known for beautiful springs and water bodies,” he said.

He further said that the awareness camps will be held to educate the masses about the importance of these water bodies.

“This is a mind game and now this is my work so I am mentally prepared for this. The sole satisfaction that we get from helping people is different. We have to work for ourselves and also for the masses. You can earn self-respect in the eyes of society and the almighty,” he concluded.