‘Guns are the last arguments of kings’---Anonymous 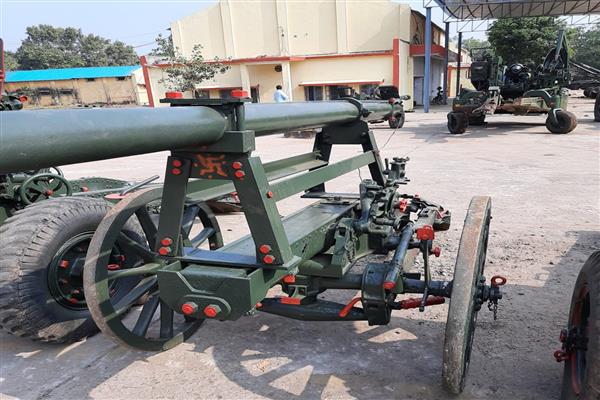 Nestled in the mountain ranges of our country are wonders, some man made and others natural, but each surpassing the other. Satpura mountain ranges are one of the country’s oldest mountain ranges roughly dividing the sub-continent horizontally into two equal halves  with the northern half also called as the ‘Indo-Gangetic plains’ from the ‘Deccan plateau’ of the south. Ensconced safely in the midst of the Satpura mountain ranges is the city of ‘Itarsi’ in ‘Hoshangabad’ district of Madhya Pradesh. ‘Itarsi’ is primarily famous for its agricultural produce and goods as also is one of the largest Rail junctions of India with practically every other train crisscrossing this junction from each of the 4 cardinal directions of our country. In addition to the above specialties of Itarsi, the place also boasts of one of its finest kinds of ‘Proof establishments” in the Asian continent on its terra firma, known as ‘Central proof establishment’.

I have had the good fortune of serving in this premier institute of the country from 2010 to 2012 and saw first-hand the various ‘Firsts of professional excellence of proof testing’ under very trying and testing times of the harsh terrain of Satpura jungles. In common parlance ‘Proof testing’ conforms to help detect potentially dangerous, undetected faults that the automatic diagnostics can’t find in a weapon or ammunition before the same is handed over to the field army for its regular use. It was in March 1894, that the first proof testing in India was carried out with firing of 6 inch (152mm) bag loader howitzers and 12 pounder shrapnel shells under the command of Capt RH Mahan. He in fact recommended the creation of a dedicated department for this proof testing in India. The proof department was sanctioned for India by the war ministry in London in 1895 and was established at Balasore in coastal area of present day Orissa with Lieutenant RT Moorre as its head.

Various administrative changes came into this organization with the passage of time. Bifurcation of proof and experiment department Balasore came under the administrative control of DGI (Directorate general of inspections) up to the year 1958. Inspectorate of armament, Khamaria(Jabalpur) was initially assigned the onerous responsibility of conduct of proof of arms and ammunition for the field army of our country. The establishment of proof firing at Itarsi was selected in 1965 and after the construction of proof establishment it moved from Khamaria to Itarsi in December 1970. The proof establishment was  finally commissioned  in in June 1971 by Brigadier RL Jetley and inaugurated by Sh VC Shukla the minister of defence production in November 1972. This proof testing range is 19 kilometers long and 5.5 kilometers wide in the midst of Satpurajungles which are primarily inhabited by the tribal population like Korkus, Gonds etc. Though this premier proof testing agency has been playing a major role in helping the armed forces of the country in keeping abreast with the latest arms and ammunition testing some of the first proof testing which this agency is credited with is the one concerning with 25 pounder Blank ammunition for the Presidential salute during 26 January, Republic day every year which we all witness with awe and admiration.

In addition to the above, the premier proof agency is also credited with using and keeping an age old but famous relic of artillery i.e. the 3.7 inch Howitzer gun carriage for proof testing the Grad BM-21 rockets. It is the same gun which was used by Havildar( later Honycapt) Umrao singh, Victoria cross on the night of 15/16 December 1944 in the Kaladan valley ,Burma during the 2WW with devastating effect. Part of an advanced section of 33 mountain battery /30 mountain regiment of Indian artillery as part of 81 st west African division in Field Marshal Slim’s 14 th army ,supporting the advance of 15 corps in the Arakans ,Umraosingh’s  gun was in an advance position. After a 90 minutes sustained bombardment from75 mm guns and mortars from the Japanese 28th army umrao Singh’s gun position was attacked by two Japanese infantry companies. Unmindful of the Japanese attack, umraosingh held on to this gun position and as a final riposte with his ammunition having been exhausted used his gun bearer ( an iron rod) in hand to hand fighting . 6 hours later when a counter attack went in he was found alive but in an unconscious state near his artillery piece. Almost unrecognizable from a head injury still clutching the gun bearer in his hands there lay 10 Japanese soldiers dead with 7 critically injured.

Honorary Capt Umrao singh is one of the only kind of Indian gunner from the regiment of artillery to be bestowed with the highest gallantry award of Victoriacross by the British in the face of the enemy during 2WW.  It goes to the singular credit of CPE, Itarsi of having kept alive the tradition of still using the gun carriage of 3.7 inch howitzer as part of proof testing for Grad-BM 21 rocket systems despite the proof agency having a plethora of gun carriage systems at its disposal.Again with the entire load of ammunition factories of India which used to be part of now dissolved OFB/Ordnance factory board dependent on this premier proof agency for their proof testing, CPE Itarsi has come a long way in rising up to the increased load not only qualitatively but also quantitatively . While catering to the proof load of variety of weapon and ammunition systems which have been recently introduced in the inventory of the armed forces like K9 Vajra, tank T-90,Dhanush, Sharang and Pinaka rocket systems, CPE , Itarsi has of late introduced the Drone system to double quick its professional efficiency. With the reigns of command under the careful gaze of its commandant Maj Gen SS Rajan who happens to be my course mate as also from the same unit as that of the famed Honorary Captain Umrao Singh Victoria Cross, I am certain he will push up the bar of professional and proof efficiency to much greater heights.

(The writer is a retired army officer and Regular Contributor to RK.  He can be contacted on his email…slalotra4729@gmail.com)